WORLD PREMIERE: IBC BAND Finalist Southern Avenue debuts "What Did I Do" 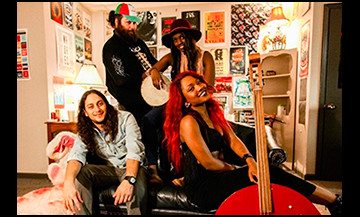 If Memphis music is a genre, this is it! Last week’s International Blues Challenge Finalists, Southern Avenue is one part virtuoso blues guitar, one part powerhouse gospel vocals. Season with soul, jazz, and of course – a whole lot of rock n’ roll.

They’re serving up a heaping helping of their unique brand of southern music with a debut EP this spring, but you don’t have to wait to hear the band that IBC-goers were raving about! American Blues Scene is exclusively premiering Southern Avenue’s new music video, What Did I Do below!

The band takes its name from a Memphis street that runs from the eastern-most part of the city limits all the way to Soulsville, Stax Records. It’s a fitting moniker for this diverse four-piece: two sisters whose musical education came from the Church (Tierinii and TK Jackson), a jazz bassist (Daniel McKee) and an Israeli-born guitarist who grew up a student of the blues (Ori Naftaly).

Southern Avenue’s self-titled EP – which the band will independently release first to local fans in February, followed by a national release in the spring – is a “true debut,” says lead guitarist Naftaly. Indeed, these five songs provide a glimpse of Southern Avenue’s range and an introduction to the band’s point of view. They take on a diverse mix of styles with ease, an indication of the myriad sounds that may be to come.

From the swinging rock and soul of lead single “What Did I Do” to the blissed-out, jam-band feel of  “Wild Flower” to the traditional blues on “80 Miles From Memphis,” at the center of it all is the electric interplay between Naftaly’s guitar and the rich gospel vo- cal of Tierinii Jackson.

“Luther heard about us before I even tried to get him to be on the record,” Naftaly says. “He called Kevin and asked him if he was producing Southern Avenue. It was just, ‘I think you guys are great, and I want to be a part of this record.’ We had two songs we designated for Luther, and he recorded the slide guitar for both of them at (Jim Dickinson’s) Zebra Ranch.”

Having just represented Memphis in the International Blues Challenge, Naftaly and his band-mates know they’ll be labeled “a blues band.” And they love the blues – but Naftaly says Southern Avenue is much more. “The genre brings diversity,” he says. “It brings together everything that came from the church and everything that came from popular music. It’s roots, Americana, soul and blues…