Honest Music Is Everything to J.D. Simo 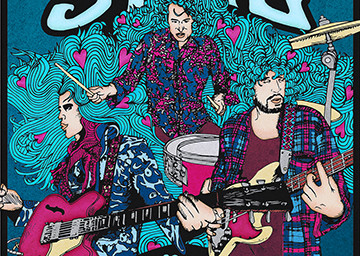 As a band, SIMO has something they want to say. Those who have checked out their new album, Let Love Show The Way realize that the band has made an honest, inviting, energetic and rocking statement. Produced by J.D. Simo himself, and recorded at at Macon, GA.’s Big House—the communal home of the Allman Brothers Band during their late ‘60s/early ‘70s heyday, this new work presents one towering performance after another.

On the road at 15 after leaving high school, Simo spent six years touring and having a go at the musician’s life. After that, he settled in Nashville and began working as a session musician. Let Love Show The Way, recorded with Adam Abrashoff on drums and Elad Shapiro on bass, is the culmination of all Simo’s learning and experiences over the years.

Simo recently spent time talking with us about the new album, the band, and why honesty in music product is so important to himself, and the band as well.

Yours was the first album ever recorded at Macon, GA.’s Big House.

Working in the studio, it was an honor and it wasn’t lost on me. I was focused on ‘Let’s just get some good work done.’

Was there some part of you that was savoring the experience?

It was really hectic, and there was an awful lot of work to get done, because I was producing the record as well. I really didn’t have any breaks. There’s always something to be tended to. There was a couple of times where I took a 30 second break from reality, mere moments really. I paused to take it in, like ‘Wow. We’re here in this room, playing this instrument (Duane Allman’s Gold Top Les Paul).’ It was very moving, because Duane and that original band are big heroes of ours. It was very brief though because I had to snap back into it, and keep working.

Your band lives and dies by the take. You don’t edit, and you don’t like to do overdubs unless they are absolutely necessary, and even then, you have stressed that they are minimal.

With the modern method of recording, there’s a myriad of ways that someone can cheat. I spent years of my life as a session musician, and I played on a lot, a lot of records. It afforded me the opportunity to learn a lot of things. It was kind of appalling to me on a daily basis how, well, it almost seems not even necessary to hire great musicians because all they were gonna do is go in afterwards and quantize drums, move things around, and snap it to a grid. It just became ridiculous to me. I mean, why are we even here trying to get a good performance if we are just gonna cut it up after the fact anyway, for, in my view, no reason.

So, going to work on our records, I prefer to record the way people used to record, which is, where you are all in the same room and there’s a certain amount of bleed between the instruments and microphones which creates a certain ambience and a certain sound. You either like it or you don’t. It’s definitely a more musky kind of a sound, but it’s what I prefer. You have to sing and play everything correctly; you can’t go back and fix stuff. Especially for the type of music that we play, I think that it’s important to be able to not cheat. So for us, all the stuff on the record is as we played it. If there is an overdub, it’s very obvious. There’s a second guitar part, or a percussion part, or a vocal is doubled; it’s very obvious. I’m not trying to fool anybody. To me, it’s about trying to put forth a record that is truthful. It’s who we really are, and what we really sound like. I think that technology should be a tool; it shouldn’t be a crutch.

In describing you’re band mates, Adam and Elad, you’ve said, “I can’t emphasize enough how much I love these guys and what they bring to our sound.”

We each have responsibilities in the band. We’re three very different individuals. We balance each other I think really well as people. Musically, we obviously work very well together. I’m pushed forward as the person that is interviewed, and obviously the band is named after me, and I’m the front man in a sense. We’re a group though, and we make decisions as a group, and we each have our roles.

Harmony is important to putting out the best music you can.

Well yeah. You can’t be creative with people you don’t have chemistry with, or don’t get along with.

There are a bunch of groups where that is not the case though.

It can change; people do change. Situations change, and success changes the situation sometimes. At the heart of it, even situations like you’re saying, that went off the rails later on down the road, you have to have a certain amount of camaraderie and chemistry to make something beautiful together.

It’s almost like a marriage in a lot of ways.

It is. It is very much. It is exactly like a marriage. The analogy is exactly true, and I think it requires the same amount of attention to how you treat one another, to long standing resentments. You just have to communicate, just like in any relationship. Communication has to be really strong. You’re living on top of each other, and you’re around each other constantly, so you just have to communicate or big problems can arise out of very little, meaningless things because of tension build-up.

When ABS listened to the album the first time through, we smiled. It has a ’70s vibe to it, but a lot smother, tighter, more sophisticated.

Thank you. I appreciate that. We are very influenced by all that, so I’m glad that comes across. It’s to be interpreted however a person interprets it. The whole point of creating something is for someone, if they do make a connection, to make a connection in whatever way is meaningful to them. It’s left up to the listener to take out of it what they choose to, if it connects with them.

You just want them to be actively involved in the process, and hopefully come away with something.

The song “I Lied” is vaguely reminiscent of Red Hot Chili Peppers, but updated, & on steroids.

Well thank you. We wrote it while we were recording. It just came out of nowhere. We were just jamming on the riff for a minute and we quickly wrote it. I took a little break and wrote the words real quick, and then we cut it. It was very spontaneous, so we didn’t have time to think about it that much. From the time we started writing it until we recorded the take that’s on the record, it was a span of 30 or 40 minutes.

The title track reminded us of Alice In Chains, but a lot more melodic.

Again, I take that as a high compliment. They’re a great band and we’re easily influenced by stuff that is from other eras, but also stuff from the last couple of decades.

I’ve come to a point where I have learned that if I think something is good, I know to trust it. If I think something is bad, or if I don’t like something; I’ve gotten to a place the last couple of years where I know if I truly like something or I don’t, which is difficult for artists in general, I think. You can’t let your insecurities impact it. Like when you are making decisions when you are recording or making a record, they are usually simple yes or no questions.

That’s one of the reasons I think that artists find it difficult to produce themselves, because, they put way too much importance on all the minutia of decisions that need to be made, when you  just make a decision. So for me, I can’t listen to myself impartially completely, but I can at least decide if I like something or not.

You produced the album. The production was very clean.

It wasn’t “polished and slick” to the point where is was overdone. It was honest. You made it the way you wanted it to be for the listener, and you didn’t get in the way of it.

I tried. It’s like I said. The takes are the takes. The vocals were live. There was nothing that ever needed to be fixed. If I felt that something could benefit from a minimal overdub, then I did so. As far as when we are mixing the record, I had a pretty strong vision for how I wanted certain things to sound. I like to work very simply, very much in the tradition of the way that people recorded 40 or 50 years ago. I think that process is a much better process for the creative end of things.

At most we have a day off every 4 to 5 days, which, corresponds to a travel day. We’re in the middle of a tour that will take us to Atlanta, Birmingham, Clearwater in Florida, and the we do the cruise with Joe Bonamassa. Then we go through Texas, New Mexico, Arizona, California, Oregon, Washington state, Utah, Colorado, Kansas, and we wind up in Chicago at the end of March. Then we go to Europe for a month, then we come back and we do a month and a half where we do the Midwest and Northeast. Then we go back to Europe again for a month of festivals, and then we come back and do a month of festivals here. It’s all touring! So, I don’t really have time for anything these days.

Anything you want to say to your fans?

If anyone takes the time to seek us out or come see us play, or to buy the record, That I’m really genuinely grateful that they did so, and I hope that they get something positive out of it.