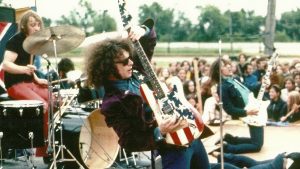 Today, the Rock and Roll Hall of Fame announced their nominees for the inductee “Class of 2017.” First time nominees include Bad Brains, Depeche Mode, Electric Light Orchestra, Jane’s Addiction, Joan Baez, Journey, Steppenwolf, Tupac Shakur and Pearl Jam. Shakur and Pearl Jam are in their first year of eligibility, and most likely favorites with the public.

Other nominees this year include Chaka Khan, Chic, The J. Geils Band, Janet Jackson, Joe Tex, Kraftwerk, MC5, The Cars, The Zombies, and Yes. Artists are eligible for induction 25 years after the release of their first recording.

The Hall’s voting body of more than 800 the artists, historians and music industry insiders will cast their ballots, with the results being announced in December. Fans have a say, casting their fan ballot at rockhall.com. The top five vote-getters will be comprise a single ballot, counted alongside the others. The public has until Dec. 5 at 11:59 p.m. ET to have their voice be heard. The actual induction ceremony will take place at Barclay’s Center on Atlantic Ave, in Brooklyn, NY.