Editor’s Note: The following is an editorial column written by our associate-editor in response to statements made by Mr. Trower in another publication. This article does not necessarily reflect the views or opinions of American Blues Scene Magazine, its editor, publisher, or advertisers.

Robin Trower is an icon in music. His unique, and ethereal guitar styling has garnered fans across the globe since 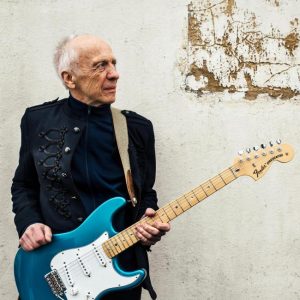 his days with Procol Harum. The 1974 blues rock album, Bridge of Sighs, is a genuine masterpiece. Trower came to his status in the world, surrounded by other British, blues-influenced giants, and he took a back seat to none of them. At age 71, his newest release, Where Are You Going To, has his creative juices flowing as vigorously as ever, as he sells out concert venues around the world.

That being said, I take exception to some of the statements that Trower made in a recent interview with the Lancashire Telegraph. He was quoted as saying, “For example, Blues has become a term for Blues-influenced rock and roll. That’s fine, but there aren’t any artists left now that can play what we would have called the Blues when I was growing up. I’m talking about Howlin Wolf, John Lee Hooker and Muddy Waters. The life they led was more to do with what they were singing about in their lyrics. There are no musicians of that calibre today. We are talking about musical giants here, guys who created the language of that music.”

“I’m Blues-influenced, that’s all,” he continued, “but Blues for me is black American folk music. You can get close by imitating it, but it really does become Blues-influenced rock and roll when the white guys do it. If you had talents like that today, Wolf, Hooker and Waters, then certainly we’d be saved from America’s Got Talent.”

Personally, I have no issue with several of these statements. Wolf, Hooker, and Waters were, indeed, musical giants. Men who took the music of the Delta to the big city, electrified and urbanized it, and made it their own. I also feel that the majority of blues heard today, is blues-infused rock.

However, there is also a huge resurgence in what is generally categorized as Americana. Many of today’s artists of that particular genre, are digging into the roots of Gospel, Country, and yes, Blues to create new music, all their own. These young up-and-comers are singing of personal tragedy, heartbreak, and are even bringing back the style of the murder ballad. Sounds like the blues to me.

The art of Southern Soul, is a recharged genre, making huge waves in the music world, more than 40 years after its inception. The sound has become nearly timeless, taking its origins from the combination of urban, black American R&B, and Gospel. It’s church music, made sexy, and today’s purveyors of it come from nearly all races and ethnic backgrounds.

But, as my father would say, let’s get to the rat killin’. The one single quote, taken from the aforementioned article, that I find most derogatory is the single line: “There are no musicians of that calibre today.” With all due respect to Mr. Trower’s age, experience, and musical knowledge, I must reply, poppycock!

The phrase, “The blues are a living, breathing thing,” has been quoted by artists, writers, and aficionados for years. Why? Because its true. The music known as the blues has developed from the field hollers, juke joints, and church meetings of the deep south, to the genre that is so popular today, that fans are finding it hard to find seats at festivals and venues the world over. That is no accident.

Today’s artists are taking what their mentors have given them, and just like Wolf, Hooker, and Waters, are making it their own. The blues music charts are filled with albums of authentic blues delivered by a combination of young artists and old schoolers, like Trower himself. I defy anyone to listen to Ronnie Earl, and not picture themselves sitting in the 708 Club. Drop the needle on “Trouble,” by Seth Walker, and its easy to imagine you’re hearing it live, in Uncle Jessie White’s backyard in Detroit.

There are second and third generation blues artists making their mark in the world. Folks like Bernard Allison, Shemekia Copeland, Lil’ Ed, Cassie Taylor, Cedric Burnside, Big Bill and Mud Morganfield, are among the host of artists that are household names in today’s blues, and following in their father’s, grandfather’s and uncle’s footsteps.

From down south, where it all began, come artists such as former Albert King Guitarist of the Year Award winner, Selwyn Birchwood, Alligator Records recording artist, Jarekus Singleton, and teenage multi-instrumentalist, Christone ‘Kingfish’ Ingram, whose influences run the gamut from Robert Johnson and Elmore James to Lance Lopez and Eric Gales.

Another thing that bothered me about what Trower had to say was his feeling that blues is only “black American folk music,” and only becomes “blues-influenced rock and roll when the white guys do it.” Using his three examples of true blues artists, Howlin’ Wolf, John Lee Hooker, and Muddy Waters, let’s not so quickly dismiss their own color-blindness when it came to the blues.

The Wolf’s childhood hero, was country music legend and Blues Hall of Famer, Jimmie Rodgers. “I couldn’t do no yodelin’,” Barry Gifford quoted him as saying in Rolling Stone, “so I turned to howlin’. And it’s done me just fine.”

John Lee Hooker had no problem recording a very successful album, Hooker ‘N Heat, with the group Canned Heat in 1970. Notoriously difficult to follow musically, Hooker was amazed at the talents of Alan “Blind Owl” Wilson, saying, “Wilson is the greatest harmonica player ever.”

And let’s not forget Johnny Winter, who, almost single-handedly, was responsible for the comeback of Muddy Waters. He produced, and played on three Grammy winning albums, on his own Blue Sky label, that gave Waters the greatest financial successes of his life.

Even the late, great, B.B. King, who surely falls into the same category as the blues titans that Trower mentioned, said, “I’ve said that playing the blues is like having to be black twice. Stevie Ray Vaughan missed on both counts, but I never noticed.” You remember B.B. King, right Mr. Trower? Wasn’t it you who said, “The first real thing I heard was ‘Three O’Clock Blues’ by B.B. King. That’s where it all began for me.”?

The blues, is an ever evolving, exciting thing. New words, attitudes, and melodies are added with each generation. It’s what keeps the genre alive and kicking. The blues can’t lie stagnant, never changing from its origins in black American life. Willie Dixon said it best, “The blues are the roots, and the other musics are the fruits. It’s better keeping the roots alive, because it means better fruits from now on.”

I don’t believe the blues luminaries of the past would lament the artists of today. I like to think that they’d celebrate them, take them under their proverbial wings and help give them flight.

Are there blues musicians on the same level as Wolf, Hooker, and Waters today? Personally, I say a resounding yes! Have they reached the status of legend? Perhaps not yet, but legends grow with time, and I plan on being around a long while to watch…and listen.