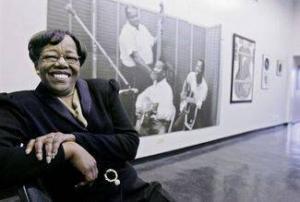 Marie Dixon, the widow of Willie Dixon, has died. She was 79 years old. A statement “on behalf of the Dixon family” has been posted on the Facebook page of Janice Monti and reads:

“Jackie and Alex Dixon, on behalf of the Dixon family, have announced the passing of their dear mother, Marie Dixon, after a long illness. Marie Dixon, widow of famed bluesmaster Willie Dixon, founder of The Blues Heaven Foundation, and much respected champion for the music and the musicians, made her transition this morning, November 20, surrounded by family and friends. Arrangements are pending and will be shared as they are finalized.”

Dixon was widely known and recognized as a nonprofit executive at the Blues Heaven Foundation that her husband had established in 1984. The foundation works incessantly to preserve the blues and its legacy, and also has diligently worked to secure royalties, and copyrights for the blues musicians who did not receive their due in the past. In addition, it assists musicians in need. Willie Dixon had said, “The blues are the roots and the other musics are the fruits. It’s better keeping the roots alive, because it means better fruits from now on. The blues are the roots of all American music. As long as American music survives, so will the blues.”

A fixture in the Chicago blues community, Dixon had worked tirelessly to promote the blues, and educate people on its history and legacy. Following the her husband’s death in 1992, she had purchased the building that housed the iconic Chess Studios in 1993. Thanks in large part to the immense efforts of Dixon’s daughter Shirli, the foundation moved into the building in 1997, and this is where the Blues Heaven Foundation lives.

The foundation has been instrumental in providing royalty recovery advice, and helping musicians in need. A statement on its website says that WIllie Dixon had, “established Blues Heaven Foundation not only to assist in documentation and promotion of the Blues, but to also support Blues artists and the business of music. A legendary songwriter himself, Willie has long been an advocate of education.” Indeed, and to that end, the foundation provides two scholarships yearly; the Willie Dixon Scholarship, and the Muddy Waters Scholarship.

Dixon participated in community events wherever there was an opportunity to further and honor the legacy of the blues and it’s musicians, both from the past, and up and coming performers as well. Every June through August, the foundation holds a series of concerts known as the Garden Concert Series. Donations received from these performances are “just to continue the programs,” as Dixon said in a 2013 interview.

At that time, she had also spoken about the foundation’s work with the Blues In Schools program. “We try to do blues in elementary schools during the month of February. We select the school, and we pick a musician (to go in there) and teach a one hour class to fifth and sixth grade students. Willie felt the younger they were, the easier it would be for them to learn how to play blues music, and go forward if that’s what they chose to do. It doesn’t have to be their career, but they would be introduced to blues music as fifth and sixth graders. He wanted them to learn. His saying were that ‘Blues was the facts of life,’ and he wanted the children to understand what the blues meant to the world.”

Noted harmonica player and Chicago blues staple Sugar Blue presented Dixon with the Blues and Spirit Award at the third biennial Blues and the Spirit symposium, held at Dominican University in River Forest, Illinois. Mrs Dixon was honored in 2013 with the Willie Dixon’s Legendary Blues Artist induction as well as the Willie Dixon Blues Heaven Foundation, into the Chicago Blues Hall of Fame.

Her passing is a huge loss for the blues, both its fans and its performers. Her life and her work on behalf of the blues community, the legacy of the blues, and blues musicians will be celebrated for many years to come.