Walter Trout: A “Grim” Fairy Tale with a Happy Ending 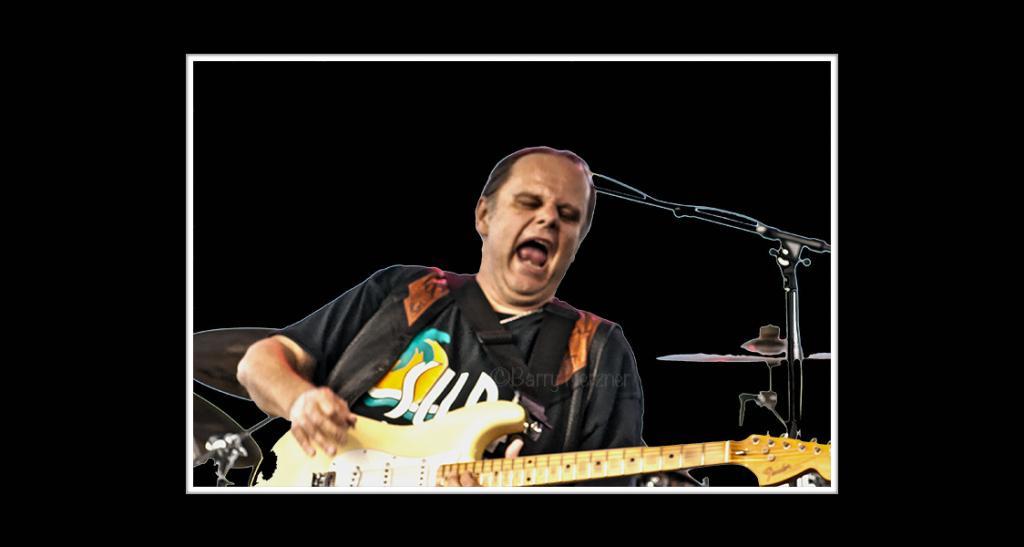 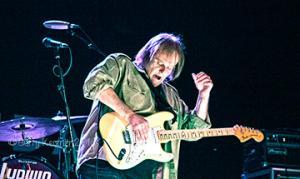 “It was eight in the morning. The door to the hospital room opened and she came walking in. The sun shone through her blonde hair and she kind of floated in the room. She looked like an angel from God.” — Walter Trout

His life story reads like the blues version of a Grimm fairy tale: a rough and tumble blues road warrior pushes back against hard luck and sorrow, clawing his way into the public consciousness against withering odds, wrestling with some of the most heinous hucksters in the business. He falls in love with a beautiful ‘princess” from a faraway kingdom. She engineers his career to new heights. He falls victim to a life-threatening illness, and she nurses him back from near death. Now, he shines the light back on her as they prepare to share their story at the International Blues Challenge “Blues as Healer” Seminar on Friday, February 3rd at 2:15 at Alfred’s on Beale (197 Beale St.) in Memphis.

Walter Trout’s childhood was, to put it mildly, a challenge. “(My stepfather) would try to murder my brother and I with the hatchet, and chop down the door of our bedrooms chasing us down the street. My brother would hold him off with a shotgun. It was not Leave It to Beaver that was going on back then.”

It was his love of blues that saved Walter’s sanity. “When I was 14 years old, I was flunking out of school. I told the guidance counselor, ‘I’m gonna be a blues guitar player.’ I already knew at 14. So, this has been it for me.”

The blues never did take away the pain, but instead made it “hurt so good.” He recalls early on, “Me and my bass player in Idaho with the band slept in a dog kennel where we each got our own cage, sleeping amongst the dog shit because we had no place to sleep on a road trip.”

There was the time his band got ripped off of all their money on a gig. “So, we got hired by the county to go clean up all the trash in the amphitheater, and they give us 100 bucks.”

Or the time a famous ’60s soul singer paid him in counterfeit cash. “He bragged that it was counterfeit. ‘Look how good this shit looks, man. This shit looks good.’ My girlfriend and I drove around Huntington Beach looking for a liquor store that had the darkest lighting so we could go in and buy a pack of gum and trade one of the $20 bills.”

By the time he was 30 in 1981, Walter Trout began a five-year stint sharing guitar duties with Coco Montoya in John Mayall’s Bluesbreakers. It was the only time in Mayall’s long career that he had two lead guitarists, and it was like rubbing two sticks together to make fire.

“The game was who was gonna be louder, and who was gonna be faster that night, who was getting over more,” recalls Coco. “John could see it. He knew he had something good going on. Me and Walter had a chemistry that really worked, and I’m not sure any of the other guitar players he had would have been able to work that form. That was the only time I could think of that he had two at the same time.”

Walter confirms Coco’s story. “He’s spot on with that quote. (John Mayall) encouraged competition between us, and what he got was who is gonna get the most applause tonight? He encouraged it, and it wasn’t always pretty between Coco and I, but what John got out of us every night was incredibly fiery, smokin’, energetic, passionate performances, and I may be biased here, but I think when I look back at John’s bands, that was right up there with the best edition of the Bluesbreakers he ever had.”

It was during his tenure with Mayall that Walter got clean. “I got sober when I was in John Mayall’s band, and what I learned from Mr. Mayall is that you can play this music, love this music and play it with all your heart, but you don’t have to be a tormented, fucked up, crazy person. You don’t have to be shit-faced and doped out and weird and strange to be an artist. The guys I came up with and the guys I have worked with who bought into that stereotype and tried to live it, they’re dead, and the guys that I know who don’t really buy into that, they have families. They have wives. They have children. They’re not all fucked up.

In 1990 Walter met the love of his life. He was headlining a gig in Holstebro, Denmark, in front of 2000 people when their eyes locked. “There was this light shining on her, and our eyes were meeting across the distance. She was in the back, and she was all I could see. She was looking at me, and she started moving forward through the crowd, and the crowd parted like the Red Sea. She stood in front of the stage. We stared at each other. We communicated with our eyes. There was lightning bolts going back and forth. I fell over the microphone.

“I suddenly had this thought. Wait a minute, I’m on stage, and I’m staring at this woman, and I have to remember I’m putting on a show, so I tried to walk sideways, but while walking sideways I was still looking at her, and that’s when I fell over the mic. stand and I finally just kinda leaned off the stage and said to her, ‘We have to meet. Don’t go anywhere.'”

About a week later Marie agreed to move to the United States with him. Today, she is Dr. Marie Trout. She manages her husband’s career. They have three sons. Her book, The Blues – Why It Hurts So Good is being published February 3rd, the day they appear at the Blues as Healer Seminar.

To say that Walter Trout was hot in Denmark in 1990 when he met and married Marie is an understatement in every sense of the word. Not only did he capture the heart of this beautiful Danish girl, but he also had a hit single on the European charts.  “It (“The Love We Once Knew” from Prisoner of a Dream) was outselling Madonna. So I go to do a tour behind the record in Europe. My manager from L.A. was road managing me. At the end of 10 weeks with a number one record, I was playing one day to 500,000 people.

Marie called the agent who handled the tour requesting the books and discovered a discrepancy of $70,000. The couple then showed Walter’s manager the books. “He says, ‘Eh, you caught me. Yup. I got your money. I’m caught, but my address is in Tijuana, and I have all the money in a Mexican bank.  So, if you want to come after me, you have to sue me in Mexico. You have to get a Mexican lawyer. You gotta come down there, but yeah, I’ve got your money. Tough shit!’

“Right to our face.

“So, at that point, I was still pawning guitars to pay the rent, and Marie looked at me and said, ‘Why don’t you give me a chance.’ I said, ‘So, take over. What have I got to lose here? I have nothing.’  And that’s when she started and she’s made it. It’s very lucrative now. We’re doing great, but only because if her hard work.”

In 2014 Walter underwent a successful liver transplant and was literally pulled from the jaws of death by Marie. His quote at the beginning of this article is about his memory of Marie entering his hospital room at a low point in his hospital stay. He wrote unflinchingly about his experience on the album Battle Scars. For nine months he lay in a hospital bed contemplating his demise.

“If I could get up, they’d carry me. They’d hold me up, and I’d walk and, if I made it 20 feet, everyone would celebrate. I didn’t want to die, but I felt like things would be easier if I just died. I was in such excruciating pain, and I was not myself, and I knew that her life was on hold because of me, and I thought it would be better if I were to die.

“I would say that to her, and she would say, ‘No, you gotta hold on. Hold on! Fight! Stay here for me. Stay here for your kids. Stay here for people who love your music,’ although at that point I thought, ‘If I can survive this, if I never got to play music again, well, so be it, you know. I’ll do something else. I’ll go work at Starbucks or something. I don’t know because I didn’t think I’d ever play again.’

“My son brought me a Strat and said, ‘You need to do this, and keep in touch with who you are,’ and they sat me in a chair and put the guitar in my hands. I couldn’t get a note out of it. I just broke down and said, ‘Get it out of my sight. I can’t relate to it anymore.'”

Marie wrote The Blues – Why It Hurts So Good as her Ph.D. thesis, and although it is not specifically about Walter’s ordeal, it was her therapy. At the Blues as Therapy Seminar, she and Walter will discuss the findings she made in her survey of more than 1000 blues fans for this book. As moderator, I will host Dr. Marie Trout. Walter, Louisiana swamp blues veteran Kenny Neal, Nurs’n Blues founder Patti Park. We are all blues survivors who feel that blues has played a role in saving our lives in one way or another. Walter is thrilled to have the love of his life sharing the stage with him for this unique event.

“She deserves it. She worked incredibly hard, and she did an incredible amount of research, and what really amazes me is that she had to stop in the middle for two years to save my life. I am bursting with pride with her, and she continually surprises me with the depth of her intelligence and her insights and her knowledge. She’s a never-ending source of wonderment to me, and I still wait for her to figure out she’s out of my league. I’m not worthy her. So, I’m in awe of her and, my God, does she deserve this more than anybody I know.

“I’m still playing the same shit, I haven’t changed what I’m doing. I just have somebody managing me who is eminently capable and eminently trustable, and that’s real hard to find. So, if these (IBC contestants) want to hear some stories, I got ’em.”

The Blues Foundation’s “Blues as Healer” panel is a marque event of the International Blues Challenge and will be held at Alfred’s on Beale (197 Beale Street, Memphis) on February 3, at 2:15 p.m. It is open to all International Blues Challenge attendees who hold IBC passes for the week. Entry is by pass only; there will be no drop-ins at the door.