Language of the Blues: ZOMBIE 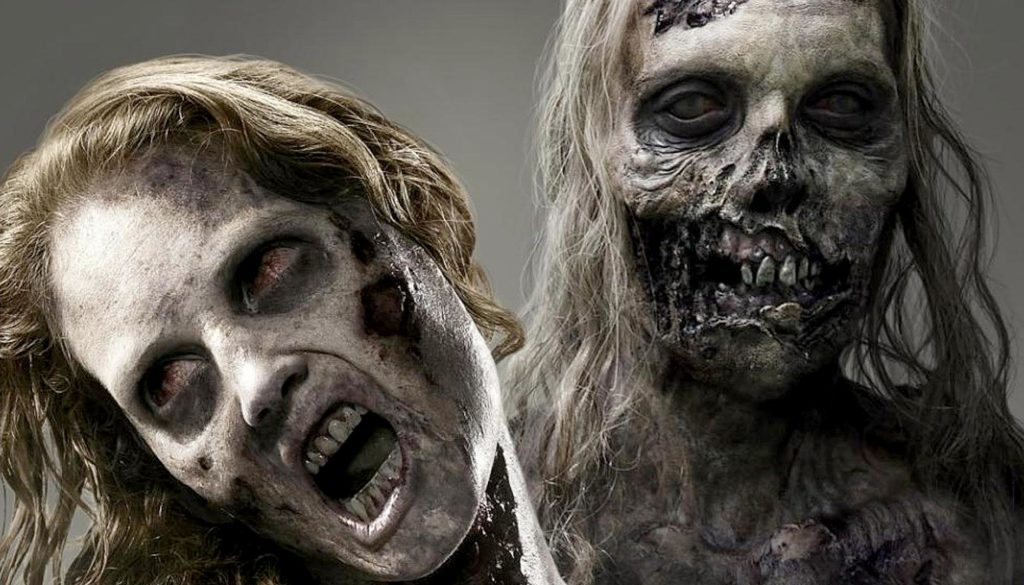 Horror flick zombies get their name from a holy West African religious experience that was misunderstood and misrepresented by European observers in Haiti, New Orleans and other strongholds of the Voodoo religion. In Voodoo – more properly spelled Vodou – the practitioner seeks the holy experience of union with nzambi, or God. Vodou possession is not the demon-possession portrayed by Hollywood movies, but rather the same state of union with the divine sought in most spiritual practices. It is akin to becoming “filled with the Holy Ghost” in the Pentecostal church, reaching the Buddhist state of nirvana, or attaining the yogi’s divine bliss, samadhi.

The Grand Zombie is another name for the Great Snake Damballah, which represents the supreme creator in the Vodou religion. In “I Walk on Guilded Splinters,” New Orleans rhythm and blues pianist Dr. John sings:

The New Orleans musician Coco Robicheaux, who’s called out in the song, explained in a 2008 interview in BOMB magazine that “In voodoo they call the gilded splinters the points of a planet. Mystically, they appear like little gilded splinters, like little gold, like fire that holds still. They’re different strengths at different times. I guess it ties in with astrology, and influence the energy. That’s what that’s about.”

The Vodou religion traveled to the United States with Haitian plantation owners and their slaves who fled the Haitian revolution for the nearby port city of New Orleans. In 1820, a Creole woman named Marie Laveau was elected the human representative of the Grand Zombie in New Orleans, making her the spiritual leader of Vodou practitioners in New Orleans. Laveau was extremely intelligent and insightful, and widely believed to be clairvoyant. She kept a python named Zombi, and danced with it on her shoulders during the ceremonies over which she presided.

In the Tshiluba language, the word nzambi means God and mujangi means the spirit of an ancestor. There is also nzumbi, from the Kimbundu of Northern Angola, which means a ghost or a supernatural force that can bring a corpse back to life.

This is where the sensationalized concept of a controllable dead or comatose person–the zombie of Hollywood movies–originated, fed by the book Haiti or the Black Republic, written in 1884 by S. St. John, that erroneously portrayed the Vodou religion as an evil devil-worshipping cult. The book contained gruesome descriptions of human sacrifice, cannibalism and black magic; extracted from Vodou priests by torture à la the Spanish Inquisition. The book later became a popular source for Hollywood screenwriters, who began churning out zombie and voodoo horror flicks in the 1930s.

There are two types of spooky zombies: the common zombie and the more dangerous juju zombie, also called “zuvembie.” Common zombies are people who are alive but have been rendered comatose by a finely ground dust of poisonous powder that is blown into their nostrils or touches their skin. Depending on locale, the powder may include gland secretions of the bouga toad, tarantula venom, the powdered skins of poisonous tree frogs, or seeds and leaves from poisonous plants. The active ingredient is probably tetrodotoxin, which can be derived from four different varieties of puffer fish.

Within minutes of touching the skin or mucous membranes, tetrodotoxin renders the victim unable to move a muscle. He or she falls into a coma-like state that strongly resembles death. Presumed dead, the person is buried alive. Once dug up and “brought back to life” as the drug wears off, the victim can be easily manipulated, and controlled by more drugging. The 1988 Wes Craven film The Serpent and the Rainbow explores this type of zombification and is based on the fascinating book by Harvard ethnobotanist Wade Davis, The Serpent and the Rainbow: A Harvard Scientist’s Astonishing Journey Into the Secret Societies of Haitian Voodoo, Zombis and Magic.

The juju zombie, in contrast, is a human corpse brought to life by ritual magic and animated by a loa, or spirit-god, that a bokor, or evil priest, controls. Juju zombification is a corrupt form of Vodou possession. The bokor may use juju zombies as bodyguards, to carry out murders and other evil deeds, or as slave labor.

Sometimes it’s the bokor who has killed the person in the first place, in order to use him or her as a zuvembie. The juju zombie is much more powerful and cunning than the common zombie because it is animated by a spirit-god. With that added power, comes more risk for the bokor, who has to be very skilled to keep the loa from regaining the upper hand.

Zombie horror imagery figured prominently in the wildly theatrical performances of Screamin’ Jay Hawkins (born Jalacy Hawkins in Cleveland in 1929), who would arise from a coffin onstage in a cloud of dry ice fog. Hawkins had originally intended to record his huge hit “I Put A Spell On You” as a soulful blues ballad.

Once the producer “brought in ribs and chicken and got everybody drunk we came out with this weird version,” Hawkins admitted, adding “I found out I could do more destroying a song and screaming it to death.” Hawkins kicked off the craze among rock ‘n’ roll performers from Alice Cooper to Marilyn Manson for imitating the undead.