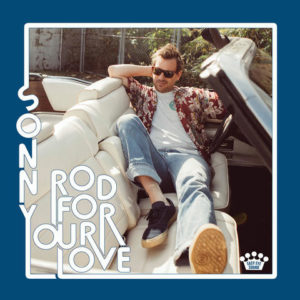 Sonny Smith, of Sonny And The Sunsets, will release his tenth studio album, Rod For Your Love via Dan Auerbach‘s new label, Easy Eye Sound, on February 9th. The record, produced by Black Keys frontman Auerbach at his Nashville studio, roots itself in old-school, guitar-driven rock & roll, and promises to be equally built for the garage and the dance floor, with big-hearted melodies and thick harmonies.

“I think a lot of albums are made in reaction to the one that came directly before,” says Smith. “By the time we got to Nashville and began working with Dan, I was thinking ‘let’s just make a fun, guitar-driven record. I don’t want to have any extracurricular stuff here. I just want it to be really pure.'”

For years, Smith has built his own brand of indie-folk and rock & roll, growing into a cult favorite along the way. To those who know his work, he’s an incredibly prolific creator, with a dozen albums to his name and a handful of related projects under his belt. A longtime fixture of San Francisco’s arts scene, he’s managed to fly just beneath the mainstream’s radar for decades, while still releasing a string of acclaimed records with labels like Fat Possum and Polyvinyl.

Rod For Your Love was recorded at the end of a cross-country tour, and features Smith and his band firing on all cylinders, their rough edges sanded down by weeks of nightly shows. Hearing that the Arcs, Auerbach’s side-project, had covered one of his songs during their own tour, Smith reached out to the label owner. From there studio time was booked, and when Smith wound up finishing his countrywide tour in Nashville, he and his road band tracked the album at Auerbach’s studio. The result pledges to be a deeply personal album, filled with heart-on-sleeve songwriting, without many overdubs or assorted clutter.

The goal with Smith’s latest was an album that felt both fresh and familiar at once, which nods to the past while still moving forward. With songs like “Pictures of You,” which find him remembering a former flame by sifting through old photographs, Smith may well have accomplished his objective in a big way.

Rod For Your Love track listing:

Pre-Order Rod For Your Love