20 Questions With Andrew McGibbon, Jr. of The Bonnevilles 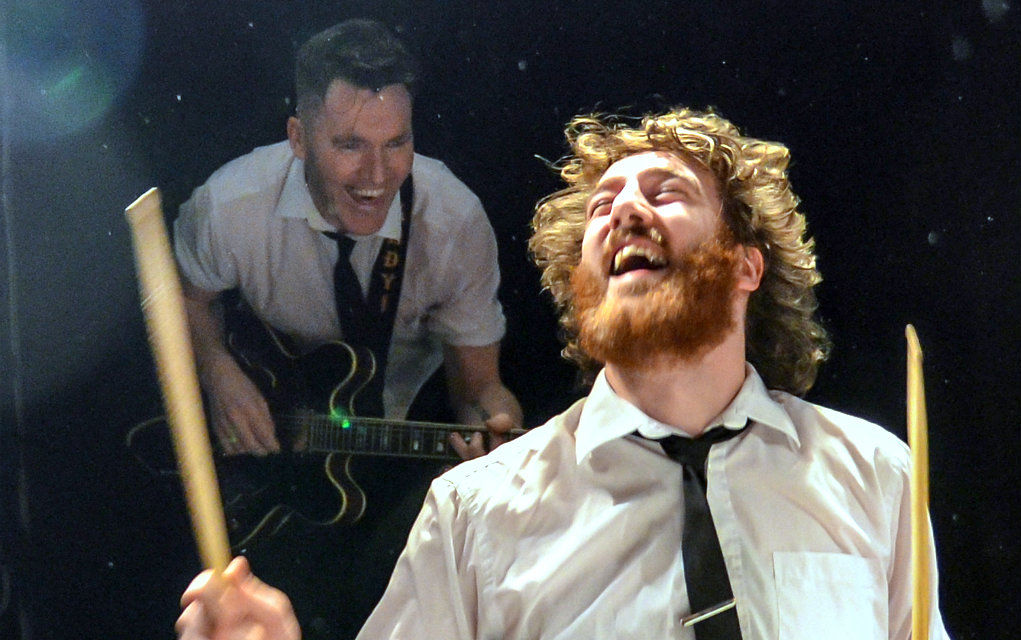 Northern Ireland rockers The Bonnevilles are renowned for both their incendiary live shows and soulful song-writing skills. Something beyond punk blues, the duo takes their sound from the true blues elders, then combining classic rock knowledge with modern day, DIY stylings. The Bonnevilles’ sophomore release via Alive Naturalsound Records, Dirty Photographs will be available on Limited Edition Vinyl, CD, digital and streaming formats March 16th.

On Dirty Photographs Andrew McGibbon, Jr. (Guitar, Vocals) and Chris McMullan (Drums), share their love for gritty blues, primitive rock ‘n’ roll and Irish folk. If a young Van Morrison, Iron Butterfly, and Led Zeppelin were to cut a jam album produced by Jack White, with a portrait of Robert Johnson on the studio wall, one would begin to define the sound of The Bonnevilles.

We recently had the opportunity to toss 20 questions to Bonnevilles’ singer/songwriter/guitarist Andrew McGibbon Jr.

What’s the origin of The Bonnevilles name? Have you changed the band’s name before?

As a kid, I was into the land speed record, Donald Campbell in England and the great American pilots of the ’60s and, of course, they drove those cars in Bonneville, hence the name… and, no, we’ve always had it.

For me Robert Johnson, Howlin’ Wolf, Muddy Waters, RL Burnside. The grunge thing also played a part in my story, listening to Soundgarden’s ‘Superunknown’ album made a big impact. It was the first heavy record I liked that was new to my generation, and Kim Thayil’s eastern guitar sounds blew me away. Then I heard RL Burnside’s ‘A Ass Pocket Of Whiskey’ album which is pretty much my favourite record of all time. It literally changed my life. Throw in a few ’60s influences and you have the roots of the Bonnevilles.

What significance does the title of your new album, Dirty Photographs, hold?

Other than it’s basically a saucy love letter to my wife, I’ve always wanted to write her a love song but it’s not what we do. I’d rather listen to Marvin Gaye than try and copy him, so I decided to write her a song she could dance to.

Dirty Photographs sounds to be more upbeat than your previous release. Was that thought out intentionally, or did the songwriting just lead in that direction?

Yeah, we kind of made a decision to write more upbeat stuff. My measure is, if The Dirtbombs would sing it then it’s good enough for us and I think they would be happy to sing a few tracks on this one. There are still a few slabs of solid woe on there though, to keep the blues people happy, or not.

Yeah, come in under budget, ha ha. Not really, we just wanted to build on the sound we’ve been developing – keep it garage, bring in a pop aesthetic with a few tracks. Not modern pop, ’60s pop. Don’t forget Jimi [Hendrix] was a pop act at the beginning.

Most of this album was written at my kitchen table when the house was empty, I have since built a studio at the back of the house and am now writing in there. We have a rehearsal space in Belfast. I write the track then bring it up to the room and we both develop it further. See what works and what doesn’t. Then we record in our friend Michael Mormecha’s Millbank studio at his house in the country.

We work real fast, this album was basically recorded in two days. A bit more time to mix it, of course. Most of the leg work is done in the writing and the rehearsal room and we let Mikey do his thing with the mix. He gets us completely and we love working with him.

What was going on in your life that made its way onto the album, either intentionally or unintentionally?

Ha ha, that’s a good one. We had a few little melodramas that life throws at you going on. These things usually find their way into a song in one form or another. Sometimes a line in a song or an entire song. “The Good Bastards” on this album is one of those tracks. I don’t want to name anyone in order to protect the guilty.

I do like “Dirty Photographs” probably because my wife, Janie, loves it and it is the poppiest tune on the album… different for us. Apart from that, I really like “The Poachers Pocket,” it has a great ’60s vibe going on that I really like.

In listening to Dirty Photographs we were reminded of the psychedelic era of the late 1960s, and particularly of bands like Vanilla Fudge. What would you tell potential new fans about the style to get them ready to listen to it?

That’s really cool, thanks. Nice to hear someone else’s opinion too. When you record an album you’re too close to it to have any decent means to judge it. I’m only now listening to our second album released in 2012, and able to hear it for what it is. Yeah this one, it’s a simple bluesy rock album basically with garage styling. A focus on songwriting and melody. That’s the most important thing in my opinion.

Oh yeah, the first time I heard Robert Johnson was easily the most important thing that’s ever happened in my musical life. I was 16 and I’d never heard him before then. I came across him in a library, actually I found a book first that told his story about selling his soul to the devil. Back then I was a practicing Catholic, so that shit really appeals to the dark aspect of my character. I got some of his stuff and I was completely and utterly mesmerized. I remember not understanding musically what I was hearing but being transfixed by it. In a war torn Northern Ireland in the ‘80s, the opportunity to hear Robert Johnson or Mississippi Fred McDowell or RL Burnside was very low.

What was the first record you ever bought?

What’s in your player these days?

Outside of music, what are your hobbies? Passions?

I’m a cyclist. I still race sometimes, although I’m very well past my best, as much as is possible with the band thing going on. It’s a beautiful sport. I love the solitary nature of it and the feeling of pushing yourself physically to collapse. I actually get a spiritual kick on a good day.

Favorite places you’ve visited that the music has taken you?

We have been very lucky to have visited so many amazing places and they all have their qualities, but hands down Mississippi. We were very fortunate to play Deep Blues Fest in Clarksdale in 2015 but I cannot even begin to explain the literal awe I felt. I don’t know if I was in a trance or under a spell but that place got into my blood. We stayed in touch with a mob of beautiful people from Tupelo and are still friends to this day. I felt like I was going to church going there. We signed our contract with Alive Naturalsound Records at Robert Johnson’s crossroads in Clarksdale. Still feels like a dream to me.

If we’re gigging, then obviously that. The band always comes first, if not I’ll try to ride my bike a lot then in the evening, go to the pub with my mate, Richey Magee. Sometimes we have house parties which usually run through to dawn. We have a lot of fun. Life in Lurgan is good.

What instrument/gear can you not live without?

Ah nothing really… I’m not a hugely nostalgic about instruments. They’re meant to be played and maintained but not idolised, in my opinion. I actually wouldn’t want an expensive instrument. I have a lovely old Kelly Amp from the ’60s and my main guitar is a black Epiphone Sheraton with custom pick-ups. I built a tremolo pedal a few years ago that is fantastic and would definitely be pissed if I lost it, but I would not like to get too attached to a thing.

What was the best advice someone gave you about the ins and outs of the music business?

I’ll be honest, I don’t think anyone has ever given me any advice. We got to where we are today by working our asses off. Gigging hard and often, focusing on songwriting. OK, just thought of something, don’t sign anything without reading it. We had to buy ourselves out of a publishing deal once. We brought it to a lawyer two years after we signed and he couldn’t believe we were so stupid, but in our defense at the time we didn’t have a que of publishers offering us contracts. It was this one and we couldn’t afford to have it checked.

What are your current tour plans?

We start a Euro tour on the 8th of April in The Netherlands, then move to Belgium and on to Eastern Europe, then Switzerland, Italy and France. Then we have a UK tour in July and another Euro tour in the Autumn. We’re also working on coming to the US at some point this year.

Gonna buy me my house.