Rich Sherman Gives Us the Lowdown on the Doheny Blues Festival 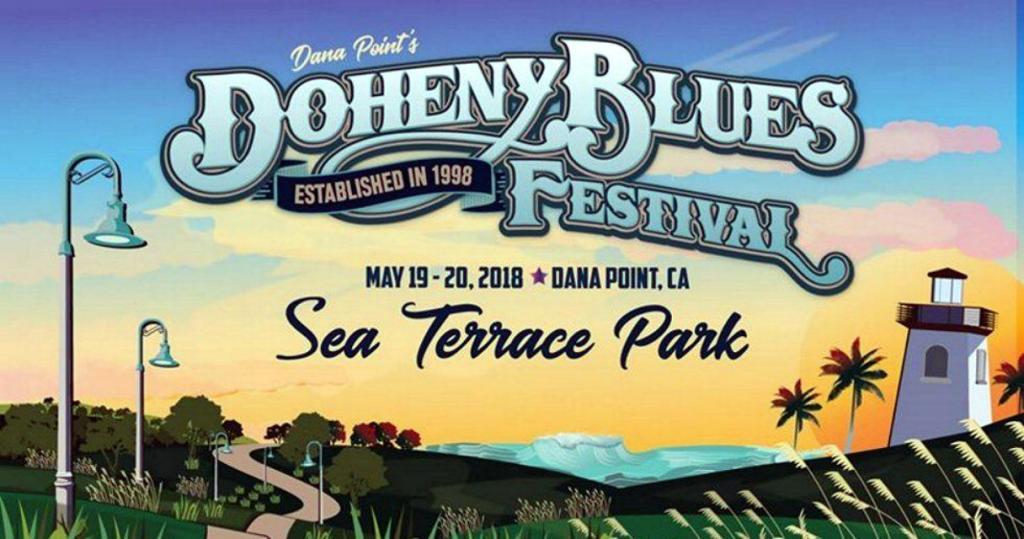 Doheny Blues Festival returns to Dana Point, California on May 19th and 20th. Dana Point “harbors the good life,” and Doheny Blues is one reason why. For two decades, the festival has brought the biggest names in music to perform, and this year is no different.

Two dozen acts on 3 stages over 2 days makes the Doheny Blues Festival one of the most popular in the area.

While gearing up for the 21st Annual event, festival founder Rich Sherman took some time to break it down for us.

So this year is the 21st Anniversary of the Doheny Blues Festival?

Yep, twenty one years. What can I say? It’s been a lot of fun. We are actually at a new venue this year. That’s the only wrinkle we have is after twenty years at one venue we’ve moved up the street a little bit. We’re still in Dana Point, but the new venue is Sea Terrace Park. We love it, and we’re looking forward to everyone coming out to our new layout at Sea Terrace.

Have you been part of the festival from the beginning?

Yes. I own the event and started it back in 1998 with some other friends. In the beginning, we didn’t really know what the heck we were doing. We were taking a shot, and were lucky enough to have John Lee Hooker at the first festival. That gave us a lot of legitimacy with other artists.

Over the last two decades you’ve had some huge talent appear.

It’s just been a great run. From the legends of American music like all the blues artists, to some of the more crossover names, we’ve really had a good balance. We’re able to bring in non-blues fans to an environment where they can find out about somebody from the South, or from Europe or whoever it might be. The luxury of having larger crowds is that we can introduce artists that may not be able to get to California often. We’ve been very fortunate in that respect.

What made you decide to start a festival there in the first place?

We were originally approached by some business leaders in Dana Point. I live nearby and grew up in this area of Southern California. These business owners were also music fans, and felt that the town was ripe for hosting an event like this. I think they had looked at the Waterfront Blues Festival in Portland thinking if they have an event on the water, we can do the same thing on our waterline. Naive or not we gave it a shot.

We started with a couple stages, some food vendors, and sponsorships from local businesses. There was a lot of risk taking in the beginning. We were probably too naive to know what those risks were at the time. This was also at a time when some of the larger music festivals weren’t around yet. We think about it now and every state has something for everyone. Back then, there wasn’t a lot of festivals to choose from. There was no Coachella, or anything like that yet.

Artists like Mavis Staples and Buddy Guy can play at some of the non-Blues festivals out there, and they have big budgets for talent, so it makes it challenging to schedule artists each year. When we started Doheny Blues, the artists we were targeting weren’t playing on lineups with crossover rock acts, there was just less competition. We probably did not see that the concert industry as a whole was going to gravitate towards outdoor events. There are a thousand or more festivals now, just in North America.

I’m located in Kansas, and our festivals are much smaller, but there are still several of them a year.

It’s a been an interesting shift for artists, because as they make less money on recorded music, they need to tour more. Festivals have helped out with that, and more power to the artists… they need to get paid. Out here on the West Coast, San Francisco Blues was an anchor date for many, many years, as was the Long Beach Blues Festival. Whatever reasons you can name, whether those events evolved or didn’t, they just went away which is a bummer for the fans and for the musicians.

With blues being a smaller musical genre than rock or pop for example, I like how Doheny fills in slots with artists that still compliment the genre.

Larkin Poe is a good example of that. They’re a young band, who very smartly utilizes social media to connect with their younger audience. In that way, they’re able to introduce them to the artists that inspired the band. They cover Howlin’ Wolf, the Stones, George Thorogood, whoever it may be. I think the tribute songs they’re doing, combined with the video vignettes has set them apart. We need artists like that, who can reach a new audience. We expect some of their fans to come out to Doheny Blues, but we also expect the artists to awaken the more traditional blues fans too. You have to tip your hat to an act who is inspired by early American music. We’re happy to have them.

The Record Company played here a couple years ago, and they’re on a similar path. It may be more rock based, but there’s a blues element to it. Certainly they’ve made their way onto lineups across America. There are a lot of acts out there like that. Grace Potter, The Black Crowes, Sharon Jones, Charles Bradley have all played here. Unfortunately Sharon and Charles have both passed away recently, but it’s nice to have that mix of music and to be able to appeal to various fans. That’s what we’re thankful for at Doheny Blues.

Will you still have multiple stages?

That includes the Backporch Stage?

Yeah, that kind of started as a Q&A stage. Our idea was if we’re booking Bo Diddley on the main stage, let’s see if we can get him to answer some questions on this other stage. We put some live music up there too, but it was really meant as an intimate way to get closer to the artists. That concept spread like a wildfire.

Then we started actually booking that stage just for itself. We try and place artists there that can really connect fans. We also expanded the backdrop and the roof and everything. We’ve actually had Trombone Shorty and his whole band on that stage, so it will hold up. It’s a smaller stage that resembles a Mississippi shack but is a fan favorite. Los Lobos have played the Backporch Stage, as has Keb’ Mo’, Kim Wilson with James Cotton, and several more. Each year we try to put a couple of acts up there that you just “can’t miss.” This year Larkin Poe is scheduled to be over there, so I imagine they’ll have a pretty huge crowd.

We weren’t the first ones to invent a back porch kind of thing, but it is certainly a piece of our event for which we’re well known. It’s not going anywhere.

I’m assuming the Vendor Village will move with you as well.

Oh, yeah. We’re just responding to what people want to do when the come here. The flattering thing is that people arrive early, the doors open and everyone rushes in and grabs their spot. Then, they start having fun. That may include great food and beverages, shopping through Vendor Village, or just bouncing around between the stages. Our event layout is designed to make it a great weekend for the fans. They’re here the whole weekend. Some people get here so early that we don’t know if they get any sleep. The least we can do is make the venue as hospitable as possible. We only throw this party once a year and we want to get it right.

Doheny Blues supports a number of charities as well correct?

This year we’re partnering with the Rotary Club and their connected charities. We’re very thankful to the city of Dana Point for supporting us, so we want to give back to the local community. We were previously on a state property, but this new venue is on city land. There are a lot of different agencies involved, and we’re involved with several different charities, not the least of which is the Rotary Club. We’re excited to get their expertise in volunteerism. I think it’s a great partnership.

Is there any one thing that you’d like to see people focus on with Doheny Blues Festival?

To the blues community – we’re looking forward to this year’s festival, as well as the future of the event. We’re very thankful for twenty years of support, but need the fans to come out, especially this year. We’re aware that some fans are a little disappointed that the venue changed. We were too, initially, but we’ve found a great new home at Sea Terrace Park. We love this venue, and we’re going to build it just like we built our former location. We look forward to the fans coming out and re-discovering Doheny Blues all over again.

Ticket prices are also something we’ve always been sensitive to, but we think we offer a heck of a value. We have an audience that loves blues, roots, and soul music, which is really niche music genres, but the reality is that talent fees have gone way up for festivals, just because there are so many festivals out there now. It’s a competitive business and there’s nothing we can do about that. Plus, the cost of insurance, security, police services and the like have also escalated, and we’re just trying to stay in line with those escalating expenses. Still, we feel that we have a great value.

We always try to mix it up with some great crossover names, a big list of contemporary blues, and a handful of acts you may have never heard of before but will get blown away by. We’re certain we’ll have something for everyone, and we look forward to the blues heads coming out and enjoying this year’s festival. I’m buying the first beer! 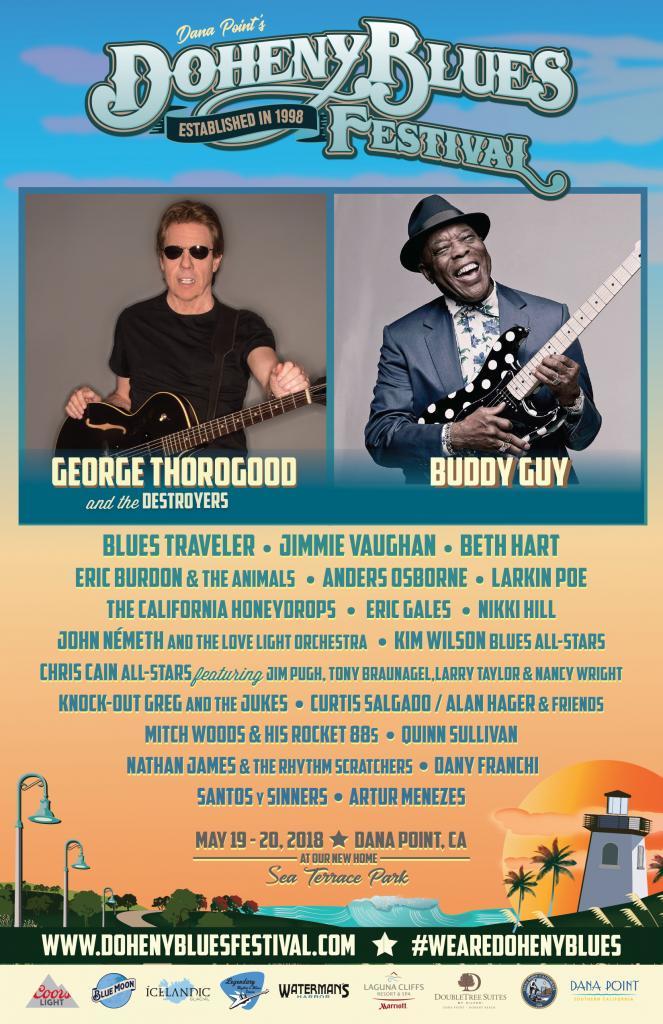