Tommy Z Celebrates 4th of July with Blues in Apopka 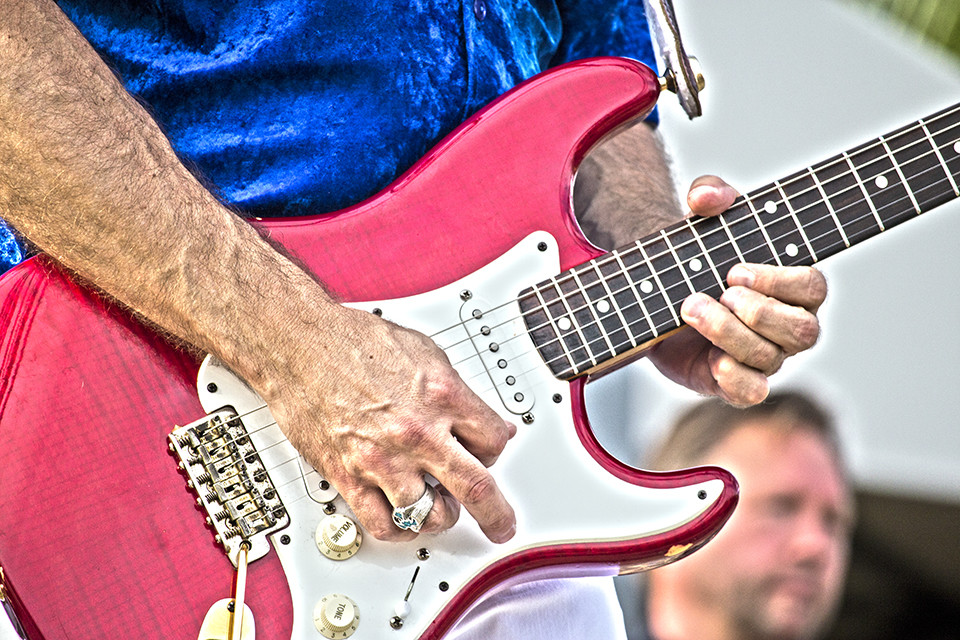 The East Coast has been wrapped in a heat wave that just won’t quit. In Florida, this is complicated by the rainy season where there are showers almost every day throughout the state.

The weather almost put a kibosh on the planned 4th of July celebration in Apopka, Florida. Due to hit the stage at 6 PM, the Tommy Z Band couldn’t even begin placing their equipment onstage until after 5 PM, when the rain had moved out, and the stage became somewhat dry again.

As they began their sound check, concertgoers continued to fill the seats and claim spaces on the lawn at the Apopka Amphitheater in the beautiful, sprawling Northwest Recreation Complex. These folks would not be denied, and anticipation continued to build as the band completed their checks.

As the band was introduced and jumped into “Bags of Cool,” the weather was now sunny and bright with the slightest pleasant breeze blowing through the area. From the first notes, Tommy Z and company gathered up the crowd and took them for a blues-infused rock tinged ride that did not disappoint.

In addition to performing live, Tommy broadcasts the blues Sundays 7 PM-Midnight at WBFO 88.7 on your FM dial. Comfortable sequencing songs, he guided the band’s set from one eargasm to the next without missing a beat. His guitar tone was deep, pointed, and fat enough to have a bit of meat on the bone. Their set included the story of woe, “My Eyes Keep Me in Trouble” from the Blizzard of Blues album, along with the deeply felt “The Blues Has Got to Come Home” from the album Sometimes, which was punctuated with deliciously biting guitar lines.

During the very politically relevant “Living in a Blue State” also from the Sometimes album, Tommy introduced the members of the band. Tom Scime was just killing it on keyboards, and the Wurlitzer rotating speaker cabinet had his jaunts along the ivories sounding magnificent.

Dave Herr was wielding his bass with the passion and precision of a swordsman, and along with the tight Samurai drumming of David “Teaspoon” Hulett, they held the rhythm in the pocket convincingly.

What makes this band sound as good as it does live is the way that they hold their own keeping the groove fat, solid, and alive when the guitar enjoys a pause. Because of this, when Tommy brings the guitar back in, it lifts the sound giving it another layer of depth and richness. To sound this solid for a live performance after being delayed so long from sound check speaks to the professionalism of the band members and the soundman.

Tommy introduced “Going to a Party” as an “audience participation” song where the audiences chimes in with “Going to a party” at the appropriate time. Besides great guitar work and sweet guitar lines, the crowd appreciated Tommy playing lead behind his neck for a good little spell.

Another touch appreciated by the crowd was Tommy walking among them, bumping fists even as he was still playing. The band finished up with a finely executed performance of the Johnny “Guitar” Watson classic “Gangster of Love.”

After the Tommy Z Band left the stage, the Mayor Byran Nelson made announcements and introduced Apopka City Council. Following this, local group The Legendary JC’s led by vocalist Eugene Snowden took the stage, brandishing their finely honed funky blues and soul with authority. There’s a reason these musicians have such a devoted following. They had the audience moving and grooving, shakin’ tail feathers to all kinds of juicy performances such as “Memphis,” “Liftin’ Me,” and more.

If you have not had a chance to catch up with the Tommy Z Band, or The Legendary JC’s you are indeed missing out.

Learn more about these artists, their available music, and touring schedules at their websites.

*All photos by Barry Kerzner