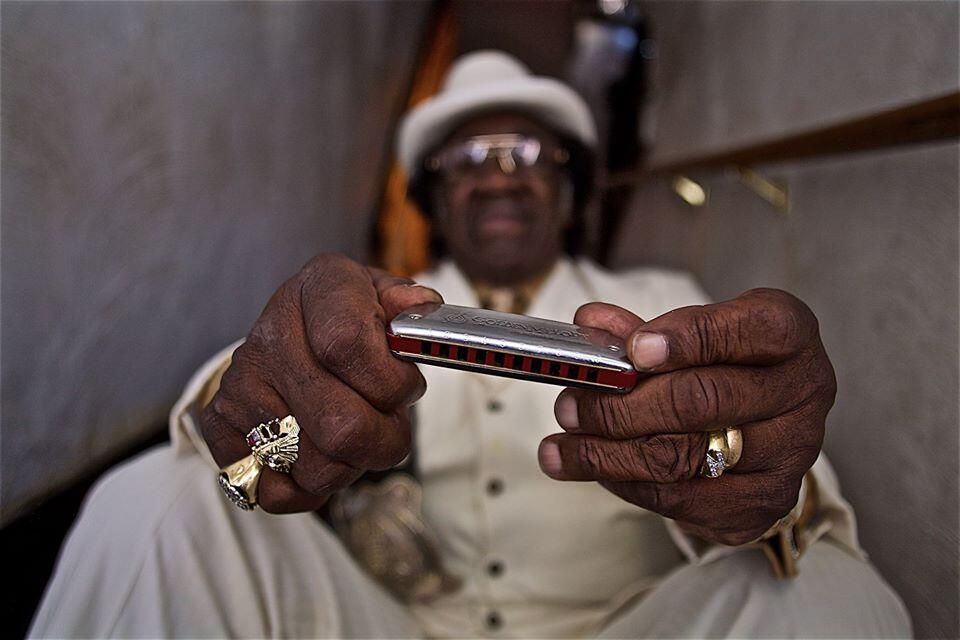 *Editor’s note: Roger Stolle is the owner of Cathead Delta Blues & Folk Art in Clarksdale, Mississippi. He is also the founder and owner of Cathead Promotions and Cathead Presents. Stolle is one of the leading authorities on blues music and culture in the Delta. Big George Brock received five Blues Music Award nominations on albums he released via the Cathead label. Stolle told us, “I was really just his friend and promoter, I guess. Our relationship is one I will cherish for the rest of my life.” Special thanks to photographer Lou Bopp for his amazing feature image of Big George.

One of the mightiest bluesmen I’ve ever known has passed, just a month shy of his 88th birthday. The Mississippi-born gentleman of the blues: Big George Brock.

HE WAS A LIVING FOSSIL OF THE BLUES.

His life was the ultimate blues story. He picked cotton, boxed and played the blues in Mississippi. Then, like other bluesmen of the era, Big George moved North in search of new opportunities. In his case, he didn’t make it all the way to Chicago. He stopped in St. Louis where he opened a series of blues clubs and shared the stage with blues masters like Muddy Waters, Howlin’ Wolf, Albert King and Jimmy Reed. He claimed an amazing 42 children – including multiple sets of triplets and twins. His brother-in-law was the late Delta bluesman Big Jack Johnson, his nephew was James “Super Chikan” Johnson and his half-brother was ex-ballplayer Lou Brock.

I first witnessed the raw blues power of Big George back in the mid-1990s at an urban juke joint in a tough part of St. Louis. Called Climmie’s Western Inn, the club featured no cowboys and wasn’t an inn. But the owner’s name was Climmie, and she was as tough as the neighborhood. As I entered the old-school venue, I could hear the band running through a fast and frenzied blues instrumental. After a couple songs by the band, a series of bigger-than-life harmonica riffs came roaring through the bandstand’s PA system — with no harp player in sight. Suddenly, everyone’s attention was drawn toward the basement stairwell, near the center of the club. Out of the downstairs ladies’ restroom, up the steps and into the audience came a large man in a colorful three-piece suit and hat. From that moment on, Big George Brock had both his mic and the audience in the palm of his hand. Muddy Waters, Howlin’ Wolf, Jimmy Reed, Sonny Boy Williamson II, B.B. King. He conjured up their sounds and a little of their souls that night. And I was hooked. Honestly, I just couldn’t believe that such a living fossil could still exist in such modern times.

Born in Grenada, Mississippi, on May 16, 1932, Brock’s family soon moved to Flower’s Plantation in Mattson – just outside of the boomtown of Clarksdale. Brock started picking and chopping cotton as a child. Because he was a particularly large, strong young man, he soon became a favorite of Plantation owner Roy Flowers.

As Brock told me during the interviews for the blues documentary Hard Times in 2006, he was never afraid of hard work, and it was at Flowers’ that he learned to plow a mule:

“I had a mule that if you didn’t sing the blues, she didn’t want to work right. And if you sing the blues, that mule, she’d work all day. You walking the cotton field, you walking the fields all day long. You just don’t know how many miles you go in the run of a day. Them’s a long mile. They used to plant cotton with a mule. Now, they plant it with a tractor. Plant it, work it, grow it, pick it. They do everything now with tractors. But back in them days, they did it with these. You did it with your hands.”

Those were the days when cotton was king, Clarksdale was the “golden buckle on the cotton belt” and blues or gospel were your only musical choices. Brock chose blues.

THE COMEBACK – A MISSISSIPPIAN GOES GLOBAL.

In 2005, I was fortunate enough to work with Big George on his comeback album Club Caravan, and soon we were traveling overseas to promote it. Italy, Switzerland, France, the U.K. and beyond.

On a French trip to play the awesome Cognac Blues Festival, we toured a cognac facility and played a show at a castle. Everything was calm, cool and collected till 10 minutes before the final festival gig of the week. The organizers had Big George and the band in a slow-moving golf cart while I walked alongside on the way to the stage. Big George casually leaned over to me and said, “I meant to tell you. I ‘blew out’ my last A harp last night.” What the?! The key of A was HIS KEY! Before I could even start stress over it, completely out of the blue, a young French fan came running out of the festival crowd, catching up with our motorcade, completely unaware of the current conversation. His English was broken, but he said he’d be honored if Big George would accept one of his homemade harmonicas as a gift. A big hand snatched up the harp, and yes… It was in the key of A. And all was right with the world.

After I moved from St. Louis to Mississippi in 2002, I mostly saw Big George either down here or at the airport. But, one of the times I drove up to STL for a show, I spent the night at his 3-story brick home in North St. Louis (in the same room Jimmy Reed once slept). In the morning, Big George started frying a half pound of bacon. I figure A) the eggs would be next, and B) we would be sharing it. Nope. Once fried, he handed me the entire plate of pig and then went to fixing himself a couple packets of Quaker instant oatmeal. Ha. Well, I ate as much bacon as I could take. He was so sweet.

Big George always loved coming back home to Mississippi, though — especially Clarksdale. He was always ringing me up with thoughts and schemes to get him back to the Delta. He loved the music fans here as much as he loved the heat and humidity.

And dang, he was good.

I was just telling some friends this morning after I heard the sad news of his passing. Whenever Big George played on the same stage as some “more famous names,” one of my favorite things to do was get out into the crowd and watch their faces as this “unknown to them” bluesman hit the stage. First, the band would start playing. Smiles. Then, Big George would hit the harmonica. Hoops and hollers. Then, he’d sing. And minds were blown. I know this because I was once one of those minds.

Lord, I will truly miss that man — both the bluesman and my friend. Thanks for sharing your life with us, Big George. RIP.