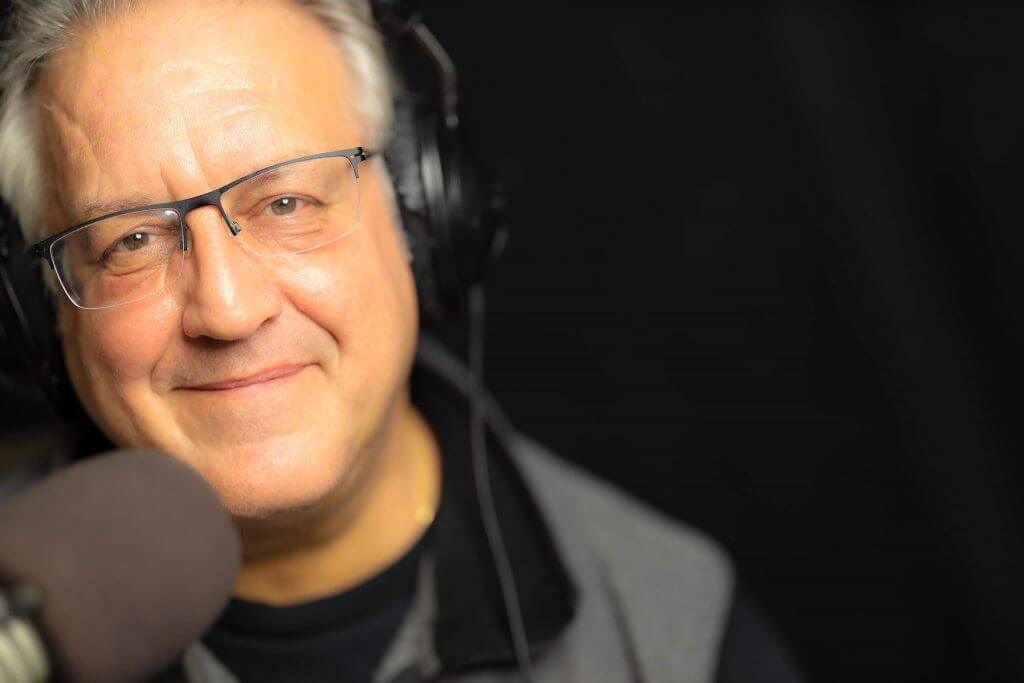 Hambone’s Blues Party has been featured in the Chicago Tribune, Sun-Times, and the Daily Herald. Since 2000, Hambone has emceed Blues on the Fox Festival presenting national acts to crowds of 10,000. He’s a contributor to the webzine Chicago Blues Guide, blogging his monthly picks for Hambone’s Top Spins.

From the backseat of his black Cadillac parked on the corner of Jazz Avenue and Blues Boulevard, Hambone has produced one of the longest running radio shows in a town known for the Blues. Fans and musicians alike tune in to hear Hambone play contemporary Blues and classic R&B recordings. Hambone shares the background, bios, and anecdotes about the music he plays.

I think I picked up the name in Law school. One of my friends named me. With the last name of Hammer, I have had a number of nicknames. I went to law school in 1979 and it has stuck for over forty years. For many years I lived in Buffalo Grove, Illinois. I lived on a tight knit neighborhood block. Every Labor Day weekend we would have a block party. It was centered around where I lived.

I have always been into music and I have always been accused of having good taste in music. I would bring out my secondary stereo and play music. In 1995, one of my neighbors told me I should get a gig on the radio. A few months after the block party, I received a call from a radio station. It was called WCBR 92.7 at the time. They were looking for a nighttime part-time person to play Blues. I thought one of my friends was pranking me. I nicely told the guy to get lost more or less over the phone. The guy called back and twenty five years later I am still on the radio.

Can you talk about your radio show: Hambone’s Blues Party? Do you broadcast from the back of your Cadillac?

That’s my tag line. Fans always ask me how’s the Cadillac. It is funny because I do drive a Cadillac. People always laugh when they see me. I think it’s a memorable pickup line. It has worked out very well.

One time we were going to try and stretch some mics from the old radio station and put them in the Cadillac but we never did. I say I broadcast on the corner of Jazz Avenue and Blues Boulevard from the backseat of my Cadillac. It has stuck nicely and a lot of people come up to me. One time I was at a bar and the guy didn’t believe I had a Cadillac. He made me go outside and show him. I have had over 600 bands play live on my show in twenty five years. Some of the bands who have never been on my show do a double take when I show up in the Cadillac.

A lot of great musicians have been on the show. Solo acoustic, 9 piece swing bands, jazz bands, soul bands, and Caribbean drum players have been on. I try and support local musicians. I am able to pick out my own music. In homogenized commercial radio a lot of people cannot play what they want to play. I try to feature live music as much as I can to support the community. The local Blues and Soul people really enjoy it. It is an opportunity to be heard and plug gigs and CDs. Sometimes artists just enjoy being on the show.

How do you organize your show?

Some people probably say that I don’t. The first hour I play jump blues, classic R&B, and contemporary new releases. Sometimes I will play music ranging from Ry Cooder to David Bromberg. The second hour of my show is the soul music hour. I pick my own music and I am not pigeonholed into it if it’s blues or not blues. I will play gospel music too. Monday and Tuesday I think about what I am going to play. Wednesday I will pull my music.

A lot of DJs play their music in exact order and know what they are going to play in advance. They write down the set list before they get to the station. I don’t do it that way. I bring in enough music so in my head I think about what will sound good after the song I just played. Most stations don’t think about sets, they just play whatever the top songs are. I try to make the set sound good. A lot of times I change it up on the fly. I am not improvising like a jazz musician but I always change it up.

Were you close to Muddy Waters?

When I went to Georgetown, I saw Muddy a lot. I saw him over a dozen times in the mid 70’s. I bumped into him often. I can’t say I was close to him but it was a good introduction to the Blues for a white kid from Long Island. That was when Muddy came out with his Born Again album. He was pretty popular and had a great band. I saw Muddy a lot and I am happy to say I did.

What are your thoughts on the current Chicago Blues Scene?

We get a little spoiled here during the normal period. You can go out and hear music at clubs seven days a week. In recent years, some of the South Side clubs have closed down which is unfortunate because there is a whole separate scene down there. I think Chicago is good because we have a lot of great musicians. There are a lot of musicians who aren’t known nationwide. Rico McFarland is a monster and he has played with everyone.

You can hear him once or twice a week at B.L.U.E.S. on Halsted. He’s probably not very well known outside of the Chicago music circle but he’s tremendous. There are great singers and great vocalists. I was just reading that Vance Kelly is playing tonight at the Taylor Street Tap. On Sundays they have a funky groove going on. It’s a special place. I don’t play Eric Clapton or Stevie Ray Vaughan on my show.

I try to introduce music that you have not heard. I play Chris Cain who doesn’t get any radio play here in Chicago. I always feature local artists signed to Alligator Records and Delmark Records. They are two big labels here in Chicago. They put out great material. I don’t play classic front porch solo acoustic country Blues. I enjoy it but I don’t play it. I don’t know if it translates well on radio.

Can you talk about your blues blogging?

I used to do that years ago and I used to review CDs for an online Chicago Blues based Guide. I don’t do much blogging anymore but I probably should. It’s on the list.

What shows have you emceed?

For over 20 years, I have emceed the Chicago Blues fest and Blues on the Fox in Aurora. I emceed the Taste of Chicago when they used to have a Blues stage and the Chicago Jazz fest. I introduced Art Hoyle. He just passed away. It was a great moment. I had to pinch myself to make sure that I wasn’t dreaming. I also emceed the Little Bear Ribfest in Vernon Hills. I have emceed some great shows and I enjoy doing it.

What’s next for the Hambone?

I hope to be doing live radio again. Up until the coronavirus, I think I only missed five shows in twenty five years. I get a jolt from doing it live. It would still be cool if I prerecorded the show but I wouldn’t get the same buzz and excitement. It’s almost the feeling a performer gets playing live in front of a live audience versus cutting a record. I hope to continue playing the blues on Thursday nights and spread my love of Blues music with everyone. I want to introduce people to the blues and restore faith in mankind by playing blues on the radio.