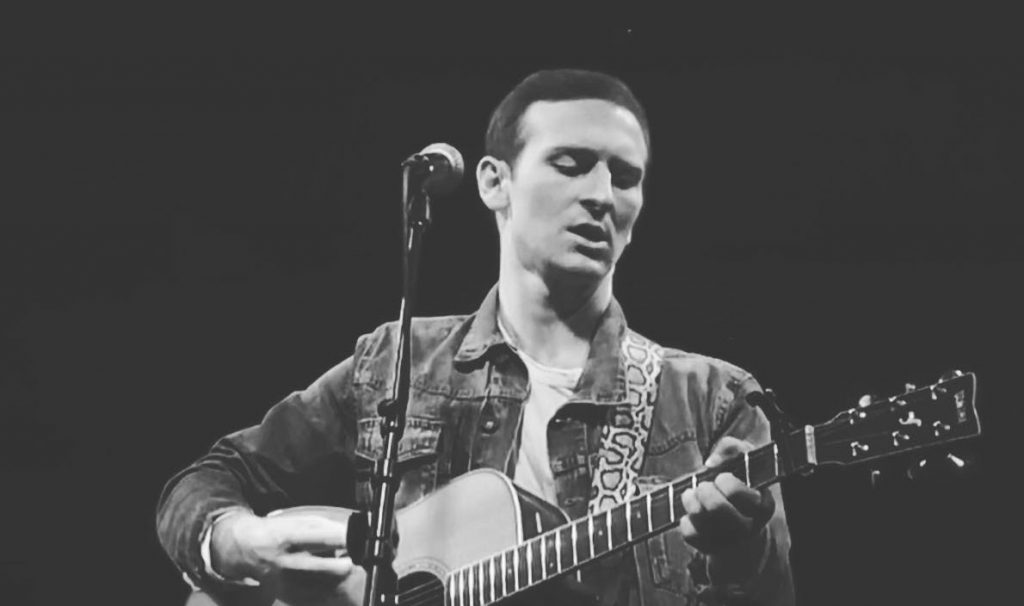 Luke Ray never recovered from the first time he saw the Beatles on VHS. He had to play guitar, play live in front of an audience, and someday write songs like they did. Ray grew up in a Chicago suburb discovering and learning the music that made every second of life worth living. He made it through school and into full-time work when he was confronted, once again, by his music passion. Ray realized there had to be a reason he reached for his guitar every day.

Inspired by the songs that changed his life, Luke Ray started writing songs in the summer of 2018, leaving another career behind. They weren’t written with his own voice in mind and he eventually realized it would be easier and cheaper to sing the tunes himself. Ray’s debut EP Thank You, Anyone — featuring the swinging single “You Could Ruin Me” — is the sound of a new songwriter embracing the inspired life he’s always wanted. Up-tempo power-pop arrangements and melodies carry his introspective lyrics, coming from a man falling in love with music all over again. 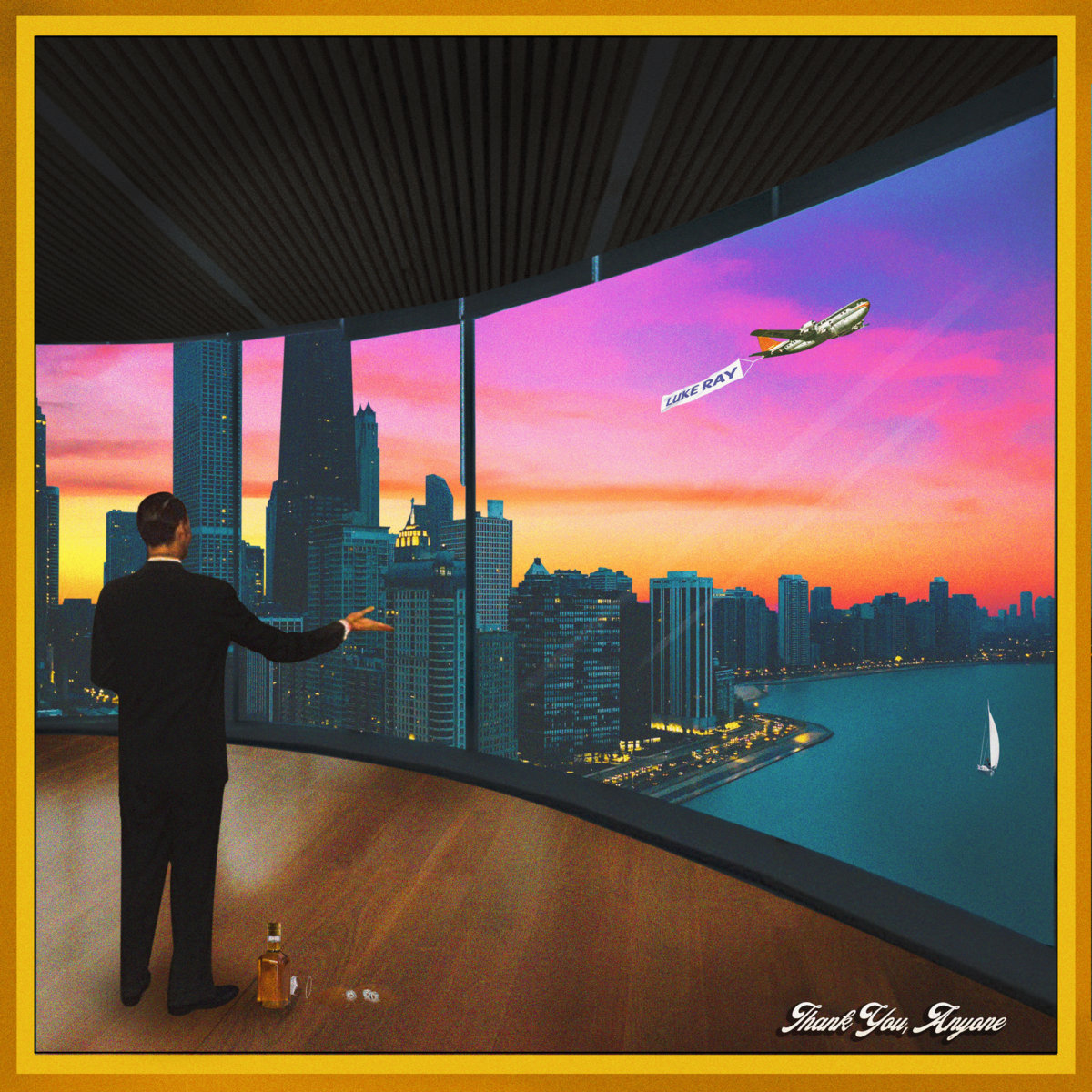 Can you talk about your new EP Thank You Anyone?

Since I started pursuing music full on, I was a guitar-playing sideman for other artists and bands around the Chicagoland area. I wouldn’t have made this EP without the lockdown. I would have been busy learning songs for other people and playing gigs. I have had a lot of time to think, and two years ago I started writing songs and stockpiling. I figured this was the time to get around to making them and having fun. I picked some of the more up-tempo songs. All the songs span the two-year period when I started writing.  The chorus hook to the song ‘Weight of The World’ came to me before I started writing songs full-time. It came out of nowhere and it is one of the first songs I wrote. I wanted to include it because it’s one of the songs that got me started.

As far as the recording process goes, my friend J.B. Bartlett recently started a studio called Shoe Box Studio II. It’s in the northwest suburbs. I went in and played everything on my own as I had a clear idea as to how I wanted to do it. Instead of other people playing all the parts, I figured I could do it by myself. I did everything with the exception of Angela Reinhart singing on a song. It was great in that this was my project and I didn’t have to compromise in any way. Since I am not a singer, the vocals were the hardest part. I just sing to get the songs out, as I would rather be a songwriter and guitar player. It took me a long time to get the courage to show people my music, let alone singing them. When I had a rough version of the EP, it was the first time my parents had ever heard my voice.  It took me twenty-seven years to show them.

Do you have a favorite song?

My favorite song is Safety Net.’ It came to me all within an hour and when it all falls out, that usually means it is one of the better ones. It is my favorite melody. Lyrically, it is the most autobiographical song because I was thinking about the time I was following another career and a whole different life. I was trying to figure out what was missing from my life and I took the jump when I realized it was music. When I hear my favorite music, I get inspired and want to get up and do something. I want this song out there with the others I am releasing as I feel it accomplishes that more than the rest.

I am going to sound like a baby boomer saying this: When I was a kid, my mom rented a VHS tape from Blockbuster of the Beatles playing on Ed Sullivan. The Beatles counted into ‘All My Loving’ from their second album and within the first five seconds it completely hit me and changed my life. There is something about it. I was awakened and suddenly there was color in the world, even though it was on a black and white screen. The Beatles are always going to be my main influence. I am an oldies guy and I love stuff from the sixties: Motown, The Stones, Peter Green with Fleetwood Mac, and David Bowie. Mick Ronson is my all-time favorite. As far as songwriting goes, I like Noel Gallagher, Rick Nielsen of Cheap Trick, and Neil Finn. There are loads of other people and I feel bad leaving some out.

Songwriting is new for you: Can you talk about your transition into it?

It is indeed. I tried to write lyrics and songs before, but it always seemed way too personal and vulnerable to me. I would write a few lines and think it was stupid. I could always write music and I wrote a lot of instrumentals for fun and for other bands. A couple of years ago, I was in between jobs and I saw a list of the one hundred greatest British artists. Oasis was near the top spot and it surprised me as I had never given them a chance. I started listening to them and it gave me a huge burst of energy and inspiration. The melodies gripped me and I loved the positivity in the music. I realized this is what I should be doing and I can do it. I decided to write a song to see what would happen and it was terrible. But that was o.k. For me it’s a numbers game. You have to write some bad ones before you write a few good ones. I figured I would get five to six bad ones and eventually a good one would come. I pushed hard at it with the idea that I am going to become a good songwriter. It seemed attainable and I fell in love with songwriting.

Does Chicago inspire your sound?

I don’t know if it inspires the sound much, but definitely the way I look at life. I get inspired just by walking and driving around the city, just getting perspective. That’s not to say a lot of the musicians I’ve known and played with here haven’t helped and influenced me. Greg McDonald did the cover of my EP. He booked a few shows for me in the past and he builds these images on his computer. There is a building called The Lake Point Tower in Chicago. The cover looks to me like the guy is looking north onto Lake Shore Drive from that tower. You can also see the Hancock Building, or whatever it’s called now since it was sold. I told Greg I wanted a cover with a guy looking out into something much bigger than himself. I was looking for something inspiring.

With Weight of The World,’ I had that chorus stored away, and the bass line I wrote probably when I was nineteen. A lot of times the melody comes first. That happened with ‘Radio Knows.’ I texted my friend something goofy on his birthday when a song that he really liked was on the radio. I texted him something along the lines of ‘the radio knows it’s your birthday.’ That had a ring to it. I sang a melody into my phone as I was driving and built it around that. The best ideas come when I am driving around and I don’t have a guitar. Those end up being the best melodies because they have to stand on their own without any music. Most of the time it starts with a melody. I let the music follow it. At the end of the day, it has to stand up on an acoustic guitar. If it doesn’t, it’s most likely not a very good song.

Where do you see yourself going?

I have a hard time looking ahead. I want to keep writing songs and playing guitar live. I do not like singing lead. Having done my first few singing gigs earlier this year and doing it in the studio, it is a lot of work and pressure. As a guitar player you can zone out and feel things out. You do not have that luxury as a singer. You have to really be on it. I am singing because I write the songs and I am the only guy who knows them. I would like to keep playing guitar, recording, playing live gigs, and I would like to write songs for myself and for other people. I get a lot out of writing on my own. It makes my days a lot better.