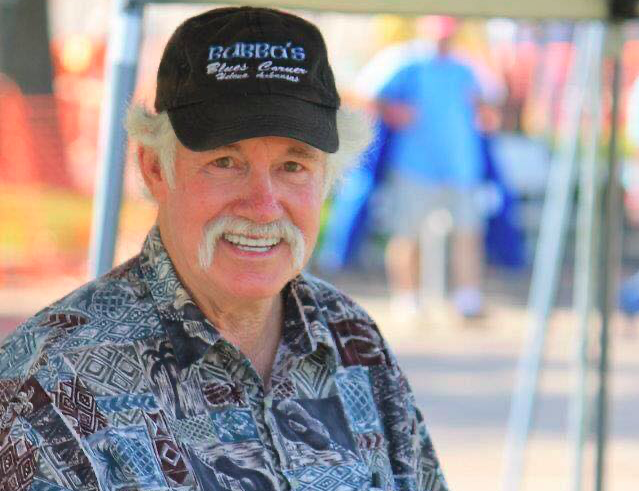 Bubba Sullivan has passed. I can’t wrap my head around it. It’s like being told the sun won’t shine anymore.

Bubba was one of the founders of the King Biscuit Blues Festival. There was the Mississippi River, the hundreds of acts that grace the stage in Helena, Arkansas. And Bubba! He introduced all the acts on the main stage, sat at the back of stage throughout and held court absorbing the best blues in the south decade after decade, year after year, day after day, hour after hour.

I nicknamed Bubba the Godfather of the Biscuit. It was tongue in cheek in that he was about as much like a Mafia mobster as the grandfather I never knew. It’s as hard to imagine the Biscuit without him as it was to imagine King Biscuit Time Radio Show after Sunshine Sonny Payne passed.

He would call me once or twice a week usually in the early afternoon, and we’d trade war stories. He’d pay 50 cents to see Elvis and Jerry Lee Lewis in an Arkansas club in 1954. He helped Billy Gibbons find a fan for a fan. He sold Taj Mahal hundreds of dollars’ worth of records, and he was in orbit that Bobby Rush sang at his 81st birthday a couple weeks ago.

Bubba Sullivan on The King Biscuit Blues Festival: “We decided to (present King Biscuit) and had no idea in the world. It’s just like a young guy meets a good looking woman, and he says, ‘Man, that the prettiest woman I’ve ever seen in my life,’ but he knows good and well she isn’t gonna have a damn thing to do with him. But he keeps on, and he keeps on. It’s like King Biscuit. After you worry somebody for a long time. ‘Well, hell, I’m going out with him just because he’s bugging me to death.’ That’s the way the music was. It just kept getting better and better, and everybody heard about it.”

“I’ve always been in the right place at the right time,” Bubba told me in 2020. “You want to see the festival keep going and all these musicians ’cause you think there’s been a ton of musicians that have been here that are already dead and gone. We probably got people that come to the festival now that never got to see Frank Frost. They never got to see Sam Carr, but might not have got to see Robert Lockwood or Pinetop or any of those guys that played in Muddy’s band.”

“Robert Lockwood would come over to the shop early, and he’d get in town early and we’d sit there and just talk about stuff, you know. He was so like my second father. My father died in ’93.

Robert Lockwood to Bubba Sullivan: “You think Robert Johnson is the only guy that got poisoned? Back at the time there was 15 millionaires in Tunicca, 14 of ’em was white and one was black. Old hard face, he owned a liquor store and a gambling joint. “(I was) with a white lady. She happened to be a nurse, and one of the people in town spiked my drink. Lucky she was there. Being a nurse and all, she got me rejuvenated back up.” Bubba told Lockwood, “Robert, I never heard Sonny Pane tell that story.” And Lockwood shot back: “I don’t tell Sonny Payne every damn thing in this world.”

Bubba Sullivan on King Biscuit Entertainers at county stores: “There was like 142 – 152 county stores out around the county, and Mr. Max Moore was selling King Biscuit Flour, and so it came time for him to be on the radio, and so they gave 15 minutes to King Biscuit Time radio show, and Sonny Boy got on the air and said, ‘Meet me and greet me there.’ Two or three days a week they would show up, and they would announce it all day. ‘The King Biscuit Entertainers are gonna be in Elaine and Marvel and Wabash,’ and they would stop at all these stores, and there would be these crowds. You could just imagine what it was like back in those days.

“I worked in a country store in Wabash Howe Lumber Company, and they would come down and play in Wabash and Elaine and Marvel and all the places. They’d bring a pickup truck down. I mean a truck and Dudlow Taylor was the piano player, and he was so big they had to leave him sittin’ up on there.

“They’d pull up in front of a store and play maybe 30 minutes or whatever and advertise their flour and corn meal and, man, there was a lot of people in Phillips County then and a lot of families. I know the store I worked in. I was 13. I worked at my uncles’ store owned by the Howe Lumber Company, Jim Howe’s dad, and them, and man, we sold a hell of a lot of flour and corn meal back in those days, and we weren’t the only store that did that.”

Bubba Sullivan on Paul Thorn: “Reba Russell happened to be standing by, and she said, ‘I’ll tell ya what you need to do when Paul Thorn comes on. You need to go get you a beer or a drink of whiskey, and you need to get up to the top of that damn levy, and you set back and just listen. There’s just something about him that he just has the crowd in his hand.’ You think about what he played. I mean he got B.B. King coming on next, but that didn’t faze Paul Thorn one bit.”

Bubba Sullivan to Jimmy Dawkins at KBBF: “You used to be called Fast Fingers. Then, they say in the last year or so you just don’t play as well as you used to, but My God in heaven, you were wild.” He said, “Young man, I grew up in Mississippi. I’m back home.”

Bubba Sullivan on Son Seals at KBBF talking to media: “Look, young man, I come back to Arkansas. They invite me back to King Biscuit Time. I’m an Arkansas resident. I mean this is where I grew up. I get paid better down here than in most places on the circuit.’ They started asking him about racism. He said, ‘There’s not racism at King Biscuit. It’s about community.’ And he said ‘The sad (thing) about that is, you people on TV, you don’t understand. You gotta be from this area. You gotta be a musician and understand how things work.’”

Bubba Sullivan on Billy Branch: “Billy Branch had taught music here. He would come in on a Sunday or something, and go out to Central High School, and they would get on stage on Friday night, and most of those kids had never seen a damn harmonica on Monday, but by God, they got up and played down there and were pretty good. Billy Branch is amazing because not only is he a great harp player, but when he got the key to the city award two years ago, his wife told me, or his girlfriend, she said, ‘Billy felt like he was back home.’”

Bubba Sullivan on Frank Frost at KBBF in 1999: “Pinetop Perkins had to be way up in age then, and Frank got up on the stage and he just couldn’t blow that harp or anything, and that was Saturday, and then on Monday they were going to put Frank back in the hospital. So, I went over there, and Frank said, ‘I’m not going back in the hospital. If I can’t blow harp, I’m ready to go.’ And so he did I think on Tuesday, and I had to sit with him till the coroner came, And he was just laying in the bed, died peacefully, you know. When he couldn’t blow that harp anymore, he didn’t want to be around.”

This was my birthday message to Bubba:

Happy 81st birthday to Bubba Sullivan, the mover, the shaker, and the blues star maker.

Congratulations to the survivor of the pandemic who’s never academic.

You are the spark that lights the flame that barbecues the Biscuit.

The medium that has the message.

Your weekly calls bring me up when I’m down, and the tall tales you tell are all true.

I bow down and kiss the ring of The Godfather.

The road goes on forever and the music never dies. And, if by some odd twist of fate, that’s not true, we’re all gonna die trying to make it true, and you, Bubba, will lead that charge.

Love ya, brother of another mother.