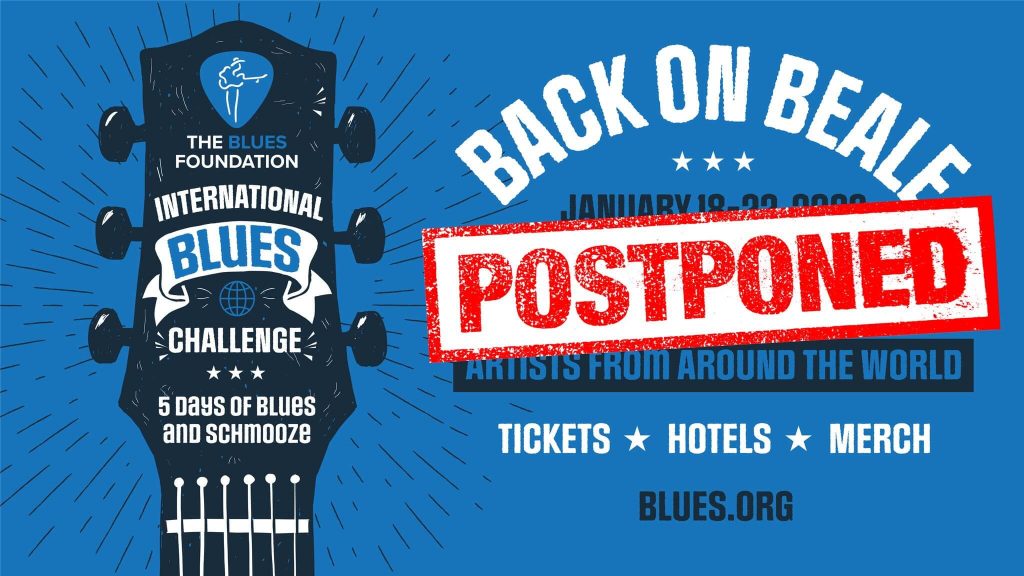 On New Year’s Eve, The Blues Foundation announced the “postponement” of the 2022 International Blues Challenge (IBC) less than two and a half weeks away. The announcement came the day before the organization’s new CEO Judith Black starts her job and less than three weeks before more than 250 acts from around the world were scheduled to perform at the IBC on Beale St. in Memphis.

One hell of a challenging way to begin a new job.

Black is co-founder and previously served as President of the Tarik Black Foundation, which has a mission to “provide young people access to practical information and exposure through real world experiences.” She also held senior posts at the Memphis Brooks Museum of Art, St. Jude Children’s Research Hospital, the National Civil Rights Museum and as chair of the city of Memphis’ Minority Business Development Oversight Commission. A very powerful resume for a lady who will suddenly be thrust into a very different game.

The Blues Foundation’s Board Chair, Scott Fitzke, made the following announcement of the IBC postponement:

The Blues Foundation Board of Directors has made the very difficult decision to postpone the 37th International Blues Challenge that was to take place January 18-22, 2022.

While this decision is coming at a late stage, it was not made lightly. As recently as mid-December, the COVID-19 pandemic and Omicron variant seemed under control, as vaccination rates were growing and large events were taking place successfully with safety protocols in place. The past couple of weeks, however, have shown a significant increase in positive cases not only in the US but globally. Memphis has seen its highest spike in positive cases this week since the inception of the pandemic.

After consulting with our IBC partners including hospitality vendors, event venues, and merchants; as well as with the University of Tennessee Health Sciences Department, similar organizations, and members of our blues community, the decision was made to postpone IBC until later in 2022. We recognize this will be a great disappointment to the challengers, affiliates, fans, and supporters, but we hope each of you understands our primary concern in making this decision is your safety and wellbeing.

The Blues Foundation is actively working with our IBC partners to determine a new event date, and we will share that news as soon as possible.

Details regarding ticket options will come in a follow-up email. Room reservations can be canceled or changed directly with your hotel.

Thank you for your continued support and understanding. We’ll see you back on Beale soon!

For questions or concerns, please contact The Blues Foundation’s Board Chair, Scott Fitzke, at [email protected].

Joe Whitmer, producer of the Blues Foundation’s annual Blues Music Awards (BMAs) concert, arguably the most complicated edge-of-your-seat event in the genre, ran the above announcement on his Facebook page with the following three words added: “It is (italics mine) postponed.”

I responded, “Cookie man! Thank God you’re a voice of reason crying in the wilderness.” He replied, “love you, my dear friend!” I’ve known Joe since he was a volunteer for the Blues Foundation three or four CEOs ago. He KNOWS the organization. It’s an uphill battle. For the second year in a row the BMAs will go virtual.

Dylan sang very early in his career that there’s something going on here, but we don’t exactly know what it is.

The extinction of the motion picture industry was once again predicted when the remake of “West Side Story” bombed at the box office. BUT Spider-Man: No Way Home took in $353 million in North American theatres opening weekend and continues to break records.

CBS took up the entire New Year’s Eve prime time with a live presentation of Nashville country acts performing at several venues ranging in size from clubs to arenas, and nowhere in the crowd shots did a I see a single mask. That after the host began the evening with a broad smile claiming they were paying attention to all the protocols.

Anderson Cooper and Andy Cohen got totally shitfaced in CNN’s New Year’s Eve coverage of a reduced attendance in Times Square New Year’s Eve. The highlight – if you can call it that – of their coverage had a wide-eyed Cohen ripping outgoing Mayor De Blasio a new one as new mayor Eric Adams was sworn in on Broadway holding a photo of his late mother over his head.

Until last week I was feeling like Cark Kent who had taken off my glasses. Am I from Krypton because I’m fully vaccinated including boosters, or am I going to contract some horrible disease from an antidote that hasn’t been tested long enough?

Are people dying by hundreds of thousands in emergency rooms, or is the media selling us a lie that attracts concerned viewers and readers that each media outlet is trying to woo away from the others to keep from going under?

In New York you have to wear a mask on entering any public building, but if you’re in a restaurant you can take your make off as soon as you sit down to order. Huh?!

It’s all about common sense duking it out with business interests spun by politicians? Does half the population die from the virus or from ignoring protocols? Is the omicron virus just a sniffle or a killer? Am I more likely to die because I’m 77, or are younger people who refuse to obey protocols more likely to die from contracting the disease?

Strangely, the arts seem to be thriving creatively if not financially as artists put more energy into their muse because they have more time on their hands, and conflict and heartaches are a great source of inspiration.

If we as a society have any sanity left, it will be the arts that see us through. 2021 saw some of the best record releases in years including:

Zac Harmon, Long As I Got My Guitar, Catfood Records