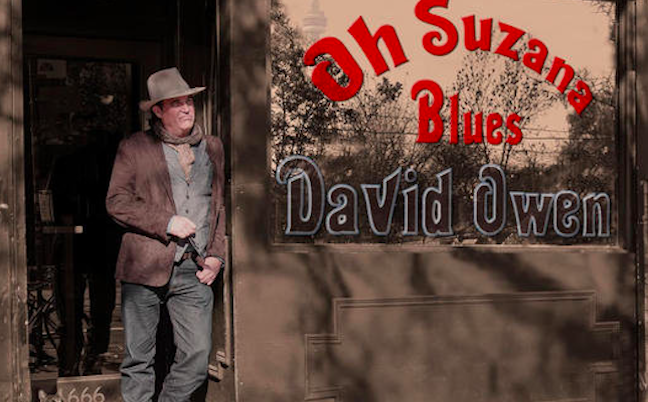 David, who accompanies himself on guitar and blues harp, was last heard from in 2015 with Livin’ Life — a recording that created real blues-world buzz. (“This is a well-done, good-sounding and tasteful album,” commented one industry insider, Bruce Iglauer, proprietor of Alligator Records.)

The Ottawa-born troubadour’s life-long musical quest died four summers later, sadly, when the police showed up at his door to inform him that his wife and mother of their three children, Suzana, had been in a boating accident at Lake Joseph, in the Muskokas. David rushed his children to a hospital in Sudbury to be informed of her passing and allow the children to say their goodbyes.  It would take months for the singer-songwriter, who had been estranged from his wife, to write the goodbye song to his lost love, however.

“Oh Suzana Blues,” along with “Stella Marie” — a song specifically about Suzana’s death — are the heart and soul of David’s latest album.

“Oh Suzana our time went oh so fast/ I wish I could have slowed it down and made it last.”

Oh Suzana Blues is produced by guitarist extraordinaire and blues legend Colin Linden, who has played and recorded with Keb Mo, Lucinda Williams and Bob Dylan, and many others. Joining David and Colin on this recording are Dominic Davies and Fats Kaplin.

Before tragedy and the pandemic struck, Dave’s career had been steadily building in Ottawa, Toronto and other parts of Canada since the ‘80s. In addition to headlining his own shows, the gifted singer-guitarist-songwriter has opened for the immortal Bobby “Blue” Bland, Muddy Waters’ boy, Big Bill Morganfield, Sue Foley and many others.

He continues to live in Uxbridge, Ontario, where earlier this winter he fashioned a “rink of dreams” for he and Suzana’s three young children.