It is refreshing to see these two women throwing out any rule books to how they should be perceived. In fact, they aren’t just breaking the rules, they are making up their own. 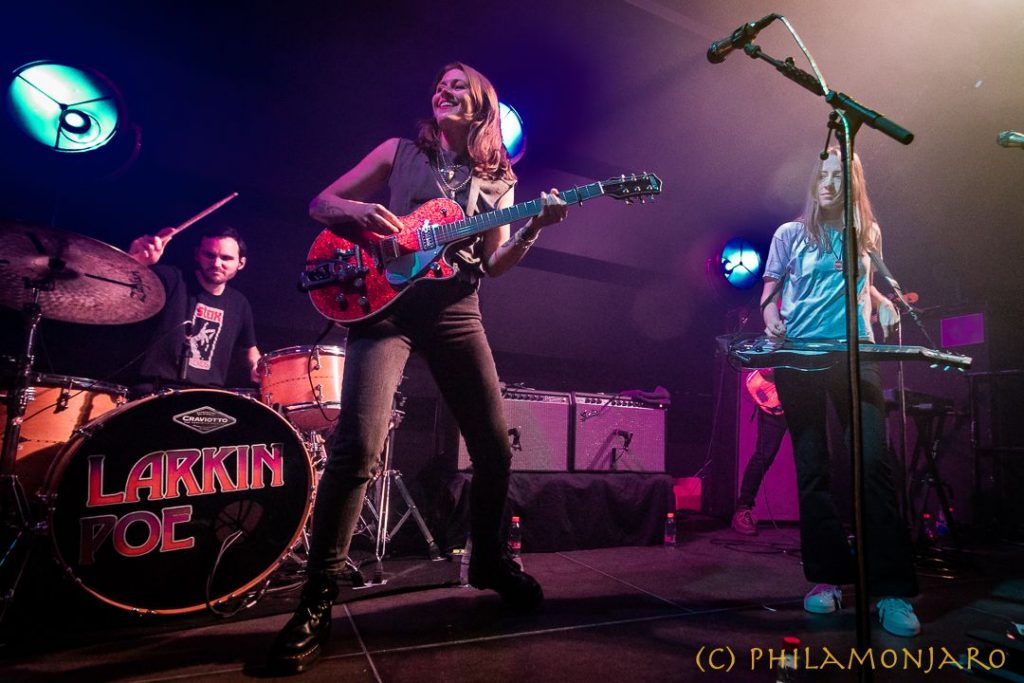 Editor’s note: This review is co-authored by Alex Baker and Phil Solomonson.

The energy in the room was electric as the Lovell sisters Megan (lap steel, vocals) and Rebecca (guitar, lead vocals) entered the stage. Rhythm section Tarka Layman (bass) and Kevin McGowan (drums) were already in a groove that locked in with the cheering crowd.

They quickly plugged in to their instruments and broke into the opening track from their 2020 release “She’s a Self Made Man.” The intro power chords and dada-dada against a straight 4/4 open hi-hat thrust the crowd in unison with them for the night. Next they went into the gossip smackdown “Keep Diggin’”and then “Trouble in Mind” – each turning up the temperature.

Backing down a notch, Rebecca started a crunchier rhythmic backbeat guitar launching to “Beach Blonde Bottle Blues.” Another original with brilliantly poignant, satirical, witty lyrics that stand up to their equally great arrangements.

“Shell-pink Cadillac, Cherry Cola six-pack /  The pop and fizz it / Hits you like a hammer / She is turnin’ heads / Weapon-grade legs / Seen her on the big screen / Y’all Got nothin’ on that”

Avid fans who packed the house had waited a long time for this night. No wonder, it had been two years since they were in Spain. Many were seeing them for the first time as Rebecca learned when she asked how many were at their first Larkin Poe concert.

“Holy Ghost Fire” blends their roots and classic rock influences as it is faintly reminiscent of Blues Oyster Cult’s “Godzilla.” But make no mistake, it is indisputably their own.

“Burn burn, baby, burn with that holy ghost fire / From your fingers to your frets, gonna testify.”

Jerusalem Pop & Rock is a small enough venue to see the whites of their eyes from the back of the room. So when Rebecca and Megan performed, it was a visceral experience. Strutting left, right and front stage, they played it big like arena rockers. Often facing off with each other trading licks, in unison or dueling improvisation.

And at other moments they portray an intimacy of a house concert, like when they played the haunting “Mad As A Hatter” – a song written when Rebecca was 17 that is an emotionally raw, bare-all testament as they witnessed their beloved grandparents’ mental health slipping away. A personal and uncomfortable topic. It brought the energy down and the crowd listened respectfully. This song is featured on their new release Paint the Roses.

A uniquely full spectrum of dynamics, Rebecca’s guitar solos could be like molasses on leather or screeching hot. Megan’s lap steel playing was smooth, harnessed with a master’s skill. As the set continued, they transitioned into the soulful, soft bluesy vocals of “Might as Well Be Me.” They played their take on Son House’s “Preachin’ Blues“ and another pre-war song traditional, the swampy gospel tune, “John the Revelator,” made popular by Blind Willie Johnson.

Quick to honor their roots, they acknowledged their heroes; Muddy Waters, Bessie Jones and Freddy King. Mentioned in their Wikipedia entry that “they are often touted as “the little sisters of the Allman Brothers”, it’s no surprise they played The Allman Brothers’ “Blue Sky.”

Mid-set Rebecca asked the audience “Can you keep a secret?” then played new material from their upcoming release. I’d tell you more but… well, it’s a secret. Find out for yourself as they are extensively touring Europe, U.K. and back in the states by the end of July.

It is refreshing to see these two women throwing out any rule books to how they should be perceived. In fact, they aren’t just breaking the rules, they are making up their own rules, without it yearning for attention. In a league with other contemporary blues guitar slingers like Samantha Fish, Melody Angel and Ana Popović, we are witnessing the best this new blues-generation has to offer.

By the encore, Rebecca’s voice had signs of fatigue but not without first ringing out every drop of energy on and off of the stage. The encore was Robert Johnson’s “Come On In My Kitchen,” which is a featured track on their 2017 Peach release. A fitting close for these roots-music evangelists.

Through these trying times, it was reassuring when Rebecca reminded us of the “healing power of music.” True to form, it was an entertaining night, full of joy and energy. And in so many ways, the medicine we’ve all been looking for.