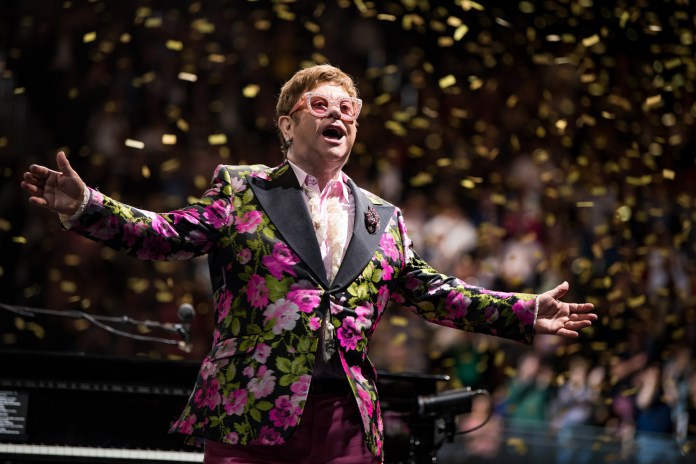 I’ve had tickets to see Elton John’s Farewell Yellow Brick Road Tour since 2019. I shouldn’t have to tell you what truly global event prevented me from going until well into 2022. I’d forced it out of my head and resigned myself to the likelihood that it wouldn’t ever be rescheduled.

Well, I’m still riding the high that it happened alright.

I beamed at the realization that I’m settling into my Amalie Arena seat at 8pm sharp and that there’s no opener. No sooner do I sit than a big, blue halo of light catches me by surprise and a rapturous applause percolates throughout the audience as the band enters the stage.

The fondly familiar piano intro to crowd favorite “Bennie and the Jets” kicked the night off. As kinetic a performance as it was, it wasn’t until the end of the song when Sir Elton stood up from his piano and flashed his thousand-watt smile that I knew just how special this night would be. It wasn’t just any smile. It was the smile of a man who genuinely loves what he does, loves his fans, and performs like no one else I’ve ever seen.

When you consider his age, the length and intensity at which he plays without a single break, and the immortality of his many compositions, these are the things that make you wonder if time itself is a naive illusion. Or so I tell myself. Because the truth is, it’s my first and last time seeing him and it’s hard not to be sad about it.

Colorfully dressed individuals of all ethnicities danced across the overhead screen during “Philadelphia Freedom,” reflecting an implicit message of love and equality as freedom. At the end, Elton stood up again – this time looking out to everyone in all corners of the arena and mouthing, “I love you guys.” The signature vocal harmonies on “I Guess That’s Why They Call It The Blues” – courtesy of Davey Johnstone (who has co-writing credit), Nigel Olsson, and Matt Bissonette – did exactly what they always have over the airwaves for nearly 40 years: add markedly to the song’s power. The only thing missing, of course, was Stevie Wonder’s harmonica solo.

Elton took the time to share with the audience the story of flying to Los Angeles in 1970 to make his U.S. debut at the Troubadour, which kickstarted his career. “When we finally got through customs and out into the actual territory as it’s known I could smell the creativity that comes from this country.” Then he joked, “Having watched The Beverly Hillbillies quite a lot… They had palm trees! It was amazing. There’s no palm trees in England.” When Elton made his Troubadour appearance the album Elton John had just come out. And at the same time he put the first single “Border Song” out, Aretha Franklin covered it. “Imagine that. Bernie (Taupin) and I are two young songwriters from England, and the Queen of Soul covers your song?”

Throughout his 50+ year career, he’d performed, recorded, and become good friends with Aretha. Her last performance was at a benefit for the Elton John Aids Foundation in New York. “She was very sick, and she was this thin,” Elton said, holding up one index finger. “I went to her backstage and said, ‘Aretha, I’ll go on instead. You can’t go. You’re too sick.’ And she said, ‘I let you down last year. I’m not letting you down again.’” He went on to say how by the end of her performance everyone was in tears, then proceeded to dedicate “Border Song” to “the wonderful Aretha Franklin who I love passionately, still.” On the screen were projection images of figures such as Rosa Parks, James Baldwin, and Nina Simone cast upon the everyman.

“Tiny Dancer,” “Have Mercy on the Criminal,” and “Rocket Man” seemed to be a showcase for Johnstone’s guitar chops. If there were high falsetto lines not fully hit, Elton more than made up for it with every bit of his silky, smoky, soulful baritone quality intact, still well within an extreme range. In the sea of red heart and blue star light-up glasses during “Rocket Man” I noticed that nearly everyone was filming, as Johnstone experimented with space sounds on his Gibson SG doubleneck for the extended version of the song. “Take Me to the Pilot,” a hit from the 1970 posthumous album, shaped up to be one of the more driving, energetic songs of the night.

I have a confession: I’m a concert crier. I never know how and when it’s going to hit me. Would it be during “Goodbye Yellow Brick Road”? Would it be during the self-revelatory natural high of a song “I’m Still Standing” somehow? One thing’s for certain, I knew I’d cry for the duration of “Someone Saved My Life Tonight.” Elton recalled how many doors were slammed in his and Bernie’s faces, and at times they thought they’d give up. “We persevered, and thank God we did. And this is one of my favorite songs we ever wrote,” he said before playing the #1 hit from his 1975 autobiographical album, Captain Fantastic and the Brown Dirt Cowboy.

Maybe Elton’s private struggles involving suicide attempts laid the groundwork for the song that arguably saved my own life. Maybe it takes me to a time when I felt so low and misunderstood that listening to this song as loud as my sound system would allow, lying on the floor to feel its vibrational frequency, felt like the only answer. Maybe I could listen to it a million times in a row and still have my breath stolen at the second verse as the lyrics “I’m strangled by your haunted social scene” hit me like a ton of bricks singing to my very core.  Tonight’s answer doesn’t involve drinking to forget or pissing off downstairs neighbors from a small apartment, though. Tonight involves the safe number of decibel levels appropriate to the space – a venue that has significantly stepped up their sound, giving justice and further clarity to Elton’s soft notes like rain and clusters of bass notes like thunder that need to be heard and felt.

“Levon” found the band in fine and unexpectedly funky form, Elton and percussionist Ray Cooper in particular. The free-form nature of the classic hit’s lyrics lent itself to the whims of the musicians. Most would call it a jam, what the song morphed into, but since it’s Elton and his all-star band I like to call it a melodic improvisation of instruments.

His piano transported slowly to the other side of the stage then back during “Candle in the Wind,” with videos of an actress portraying Marilyn Monroe playing in the background. “Funeral for a Friend/Love Lies Bleeding” proved another rocker, with Elton sporting his custom Gucci wool mohair jacket with floral embroidery.

Before launching into “Don’t Let The Sun Go Down On Me,” he noted his current lineup – John Mahon and Nigel Olsson (drums, backing vocals), Ray Cooper (percussion), Davey Johnstone (guitar, backing vocals), Matt Bissonette (bass guitar, vocals) and Kim Bullard (keyboards) – is one of his favorites, and that they continue to inspire him. On “Crocodile Rock,” Elton left it entirely up to the audience to tilt their heads back gleefully and sing the falsetto “la-la-lala-la” parts. He just listened, smiled, and worked the piano as the screen displayed their faces.

Golden, glittery confetti rained down on the crowd suddenly as the band performed “Saturday Night’s Alright For Fighting” to highly-charged fans, a bittersweet signal we were near the end. Indeed the spotlight faded, with Elton eventually returning in a pink robe. The three-song encore included his current hit, “Cold Heart (Pnau remix)” featuring Dua Lipa, and first hit “Your Song.”

Removing the robe, he unveiled a tracksuit. He thanked and congratulated his fans for dressing up, adding, “It makes me so happy to see you all here. You’ve been amazingly loyal, as you have been throughout my career. America is where my career took off, so I owe you everything… I’ll never forget you, because how can I? You’re in my heart and soul.”

From behind his piano, he bid us “Farewell. Goodbye.” Not only was title track “Goodbye Yellow Brick Road” the obvious perfect choice to cap off the Farewell Yellow Brick Road Tour, but it was a foremost example of Elton’s remarkable ability to translate the grooves of a record and amplify that experience into live performance. We all belted out in unison the “ah, ahs,” heightening already palpable moments of the song. With that, he mounted a platform that carried him up and faded him from view as if riding into the sunset.

Bennie and the Jets

I Guess That’s Why They Call It the Blues

Have Mercy on the Criminal

Rocket Man (I Think It’s Going to Be a Long, Long Time)

Take Me to the Pilot

Someone Saved My Life Tonight

Candle in the Wind

Funeral for a Friend/Love Lies Bleeding

Burn Down the Mission

Sad Songs (Say So Much)

Don’t Let the Sun Go Down on Me

The Bitch Is Back