The Revivalists’ live show is a must-see, always a party befitting their New Orleans roots. And with her Flying V guitar, Grace Potter can seemingly do it all, crossing genres and styles without ever appearing out of her element. 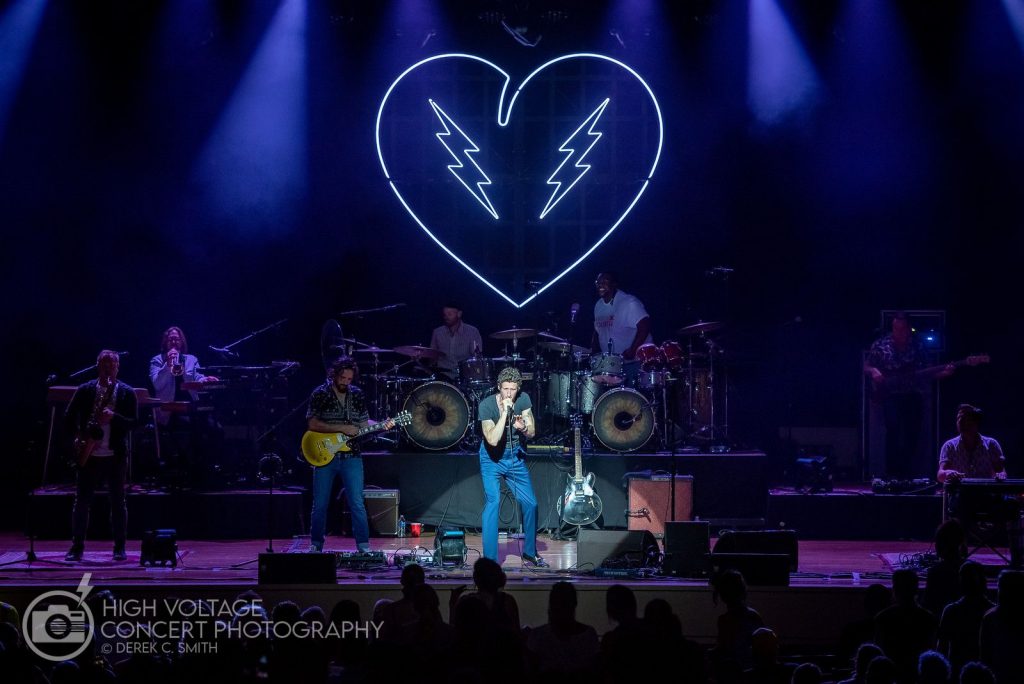 It was an inauspicious beginning to an otherwise superb evening. Headlining Ravinia, a 36-acre outdoor music venue nestled in the woods just west of Lake Michigan and north of Chicago, The Revivalists took the stage at approximately 8:45 pm in the sweltering summer heat that is common to the Chicago area. Seeking to keep the audience ablaze, the band launched into “Criminal,” their scorching rocker from the 2014 release “City of Sound.” Unfortunately, the song was even too hot for David Shaw’s mic to handle.  No sound.

You couldn’t help but feel for Shaw as the rest of the band – consisting of Zack Feinberg [guitar], Andrew Campanelli [drums], George Gekas [bass], Ed Williams [pedal steel guitar], Rob Ingraham [saxophone], Michael Girardot [keyboard, trumpet] and PJ Howard [drums, percussion] – continued laying down the funk, soul grooves of the song. It had to be tearing Shaw up inside, but in front of the thousands of sweat-drenched fans who flocked to the venue, Shaw was as cool as could be, keeping his composure until finally finding a working mic before launching into the aptly titled “It Was A Sin” from the 2015 release Men Amongst Mountains.

If the faulty mic was a sin, it was quickly forgiven by the crowd who raucously cheered when Shaw light-heartedly engaged the crowd about the hiccup.  From then on, it was all systems go, with the band firing on all cylinders for the next 90 minutes as they gradually stretched and grew their sound until reaching a masterful four-song crescendo to close out the show with “Celebration” (from the 2018 release Take Good Care) and an encore of “Soulfight” (from their 2008 self-titled release), “Catching Fireflies” (from the 2010 release Vital Signs), and “Wish I Knew You” (from Men Amongst Mountains).

These closing numbers exemplify why The Revivalists are a must-see live band.  Whether it is the unique backbeat of dual drummers Campanelli and Howard, the driving bass of Gekas, the soulful and powerful voice of Shaw, or the extended grooves from the respective guitar, sax, trumpet and pedal steel solos of Feinberg, Ingraham, Girardot and Williams, The Revivalists’ live show is always a party befitting their New Orleans roots. It’s one you will surely not want to miss.

Opening for The Revivalists was Grace Potter, the singer-songwriter and multi-instrumentalist who previously helmed the rock band Grace Potter & the Nocturnals. She has since gone on to solo success, including the 2019 Grammy-nominated release for best rock album, Daylight. She enthusiastically took the stage after her band kicked into the dirty and driving rhythms of “Medicine” from the 2010 self-titled release Grace Potter & The Nocturnals, and never let up over the course of her 75-minute set. Throughout the evening, it was difficult to tell who was having more fun – Potter or the audience. Her smile and boundless energy were infectious.

It’s the breadth of her musicianship, however, that really stands out. From the sad love song “You and Tequila,” the duet with Kenny Chesney that earned Potter her first Grammy nomination, to “Paris (Ooh La La),” the hell-raising rocker on which Potter shreds her Flying V guitar, Potter can seemingly do it all, crossing genres and styles without ever appearing out of her element.