Ryan Lee Crosby Has His Foot in Two Worlds

"Spending time with Jimmy 'Duck' Holmes and learning from him has been something of a process of unlearning." 'Winter Hill Blues,’ recorded in Memphis by acclaimed producer Bruce Watson, is out now! 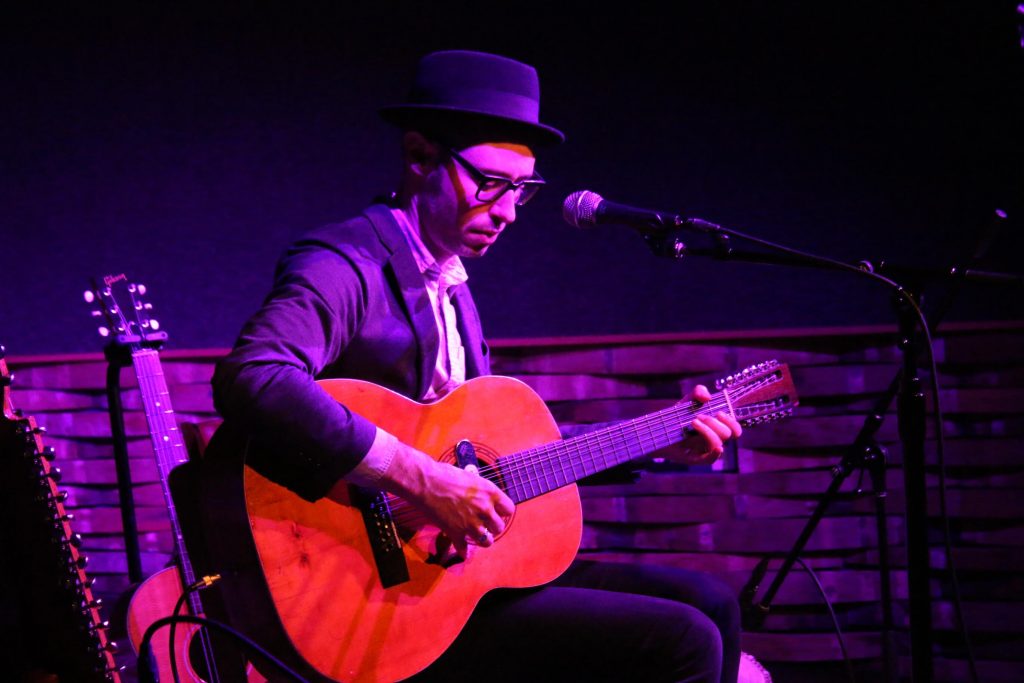 Ryan Lee Crosby has an English degree from Northeastern University in Boston and once fronted a post-punk rock band named Cancer to The Stars inspired by Joy Division. They played in Boston nightclubs with names like T.T. the Bear’s Place, The Middle East, and Lizard Lounge. But his just-released album Winter Hill Blues takes the listener into a very different world of Bentonia blues which he’s learned under the tutelage of 75-year-old Mississippian Jimmy “Duck” Holmes, the prime practitioner of a style Crosby calls haunted, supernatural, brooding, ethereal and moody.

“Spending time with Jimmy ‘Duck’ Holmes and learning from him has been something of a process of unlearning,” says Crosby. “I see him as a mentor and teacher. It’s a process of having a foot in each world. I do take an academic approach to it when it’s relevant or useful or interesting to me, or it helps me to communicate something to other people in my class, but there’s a strong emphasis on this idea of the music being different each time, of it being intuitive. And just because Jimmy’s approach to it might be different than, say, any of the academic experiences I’ve had with music, I don’t think it has any less wisdom. In some regards, I think it has deep wisdom.”

The Recording Academy nominated Holmes’ 2019 album Cypress Grove for a Grammy Award as Best Traditional Blues Album at the 2021 Grammy Awards presentation. One of 10 children, Holmes is the proprietor of the Blue Front Café in Bentonia, Mississippi, which his parents opened in 1948 and he has operated since the early 1970s.

Smithsonian Magazine described Bentonia as “a village of 400-odd souls, one of the few signs of life are the half-dozen pickup trucks parked or idling outside Planters Supply, the local feed and seed. The Blue Front Cafe sits at one end of the street, next to the rusted husk of a former cotton gin and across the railroad tracks from a string of long-shuttered storefronts and sagging rooflines.”

Bentonia is a couple of thousand miles away from Boston, but it’s where Crosby finds his muse. “I always try to say, ‘This is how Jimmy showed it to me.’ My experience with his teaching style is that sometimes it’s a matter of you sitting there, and he’ll tell you to watch his hands, and sometimes he’ll show you fragments of songs or prevalent themes, melodies, and riffs from certain songs.

“It’s more like working with bits and pieces and how you string those together in a way that’s true to you. It’s where I think a lot of the artistry is and the uniqueness of the music. In my class we may look at a section of a song or a riff or an idea, and sometimes we may just take one part of a song and play it over and over and over for a while, but I’ve been trying to transcribe recordings as meticulously as I can, too, because to my knowledge nobody has done this yet.”

The title cut on Winter Hill Blues is about Crosby’s mother who died when he was 36. He told one journalist she was “preoccupied with angels and devils.” His father died nine years earlier. “There was a lot of tension in my household growing up, and music opened the door to feelings of freedom, power and beauty.”

In my interview with Crosby he explained, “Blues had always been important to me. The very first song I tried to write was a blues song when I was a kid, and when I was in my early 20s, with my band Cancer to The Stars, this idea of illness and healing and loss, those themes have always been in my musical experience regardless of what genre I was working in.

“Getting into the Bentonia style just feels to me like it holds all the qualities of how I want to live my life in music. It feels like the kind of music in which I can most be myself. It just seems natural to me.”

Winter Hill Blues on Crossroad Records was recorded in Memphis by producer Bruce Watson, whom I interviewed recently for American Blues Scene. He has a storied career at Fat Possum/Big Legal Mess/Bible & Tire Records and has produced albums for Junior Kimbrough and RL Burnside.

“I always try to say, ‘This is how Jimmy showed it to me.’ My experience with his teaching style is that sometimes it’s a matter of you sit there, and he’ll tell you to watch his hands, and sometimes he’ll show you fragments of songs or prevalent themes, melodies, and riffs from certain songs.

“You can’t separate your life from the music, and I think with all music but certainly especially blues, I know this is something Jimmy has talked to me about. Your life is your music. You have to play what is true to you and what you love, and what you have experienced directly or someone you know has experienced. And yeah, I feel a lot of these themes have been in my music for a long time, but there’s something about the Bentonia style in particular that holds it well, and helps me to feel like myself.”