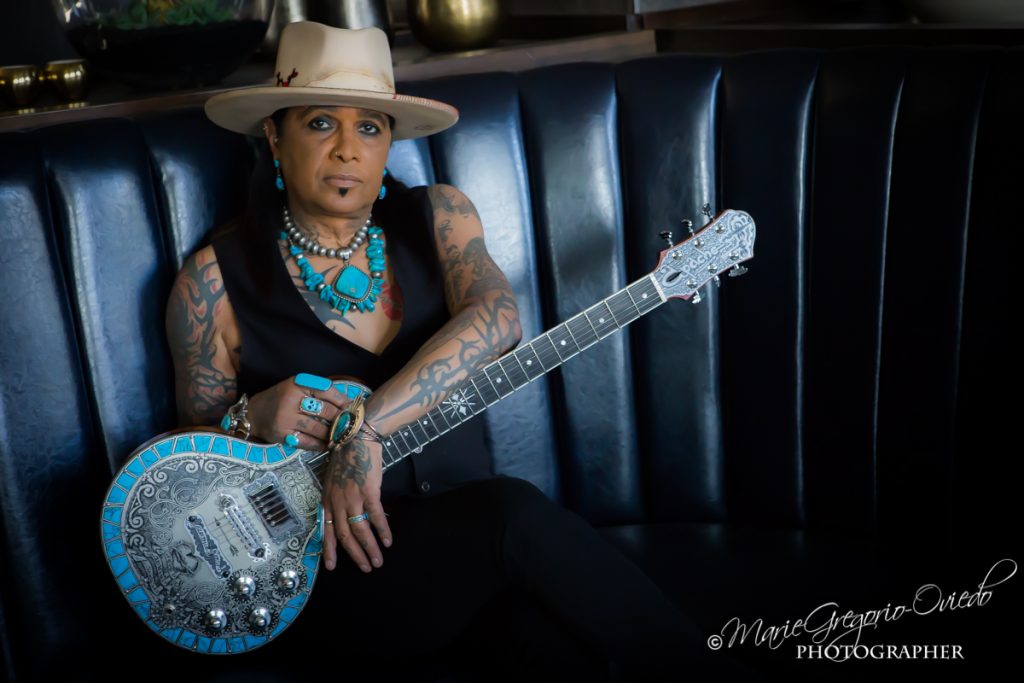 Grammy Award-winning singer, songwriter and incendiary Native American guitarist Micki Free has released a new single which features guest appearances from Santana’s band members: Cindy Blackman Santana, Karl Perazzo and Andy Vargas. The track and its video were inspired by all the turmoil going on in our world today and highlights images from across the globe of various injustices (Covid, racism, Women’s rights, war, famine, etc.).

Can you share the main message of “World On Fire” and how you developed the lyrics?

To me the message is very clear in my song; I was inspired by all the turmoil going on in our world today: Roe v. Wade, the war in Ukraine, BLM, Native Americans fighting for water rights and ALL injustices happening worldwide. I literally wrote the lyrics based on current events happening in our world today; Covid, brother fighting against brother, racism, smashing a women’s right to choose, war, famine, prejudice, any and all things that moved me.

How did this inspire the music video?

I literally wanted to bring my words to life in the video, to show images of the world today and all the injustices we are facing. My video is just a small part, a small mirror shall we say of my interpretation of the world today.

You enlisted guest musicians Cindy Blackman Santana, Karl Perazzo and Andy Vargas who are all currently players in Santana’s band. Can you tell us how they came to be on the track and the impact they had on writing its music?

Carlos Santana is one of my biggest idols and friends; ever since I was a boy, I’ve been inspired by his music and guitar playing. To actually call him my friend and jam with him now is a honor and dream come true.

Cindy Blackman-Santana was in my band American Horse Trio; she is my sister and dear friend, the bridge/link between myself and Carlos. The song ‘World on Fire’ is actually my musical homage to Carlos Santana, his feel, style and messaging. I became ‘Santana Family,’ as Cindy and Carlos call it, with my connection with Santana, and jamming with Carlos at his residency at The House of Blues in Las Vegas and joining him onstage worldwide whenever possible. My dream was to have Carlos play guitar on it as well, but he was busy recording his last album. I’m playing ALL the guitars on the song. Andy Vargas and Karl P. are my brothers as well. I asked them to guest on this track; their influences help give it the feel I was going for.

“World On Fire” is featured on your latest solo album Turquoise Blue released earlier this year. The album highlights your reverence for the blues-rock genre with some slight R&B undertones. How do you feel your past career influenced the music on this album and what separates it from previous releases?

I’ve loved blues-rock as long as I can remember…the style of combining blues-based riffs and rock together moves my soul…I am driven by guitar tone.

Bands like Santana, ZZ Top, Bad Company, Jimi Hendrix, The Rolling Stones and Aerosmith, to name just a few, have always been an inspiration to me. Their swagger and style and songs molded my guitar playing style. Joining the group Shalamar helped me understand R&B at its finest. Turquoise Blue to me is my best album to date, bringing together all my eclectic influences and style. I wrote the whole album during Covid when we were all confined to our homes. I did what I do best–write music. I was inspired to tell a story through my songs.

You’ve just released a remixed version of “World On Fire (Warrior Remix),” what changes did you make to the song and why?

The new ‘Warrior Remix’ is a bit more aggressive, and the Latin feel to the song is more apparent, bringing the percussion and solo guitar more upfront and center. Doing this adds more groove to the track, inviting the listener to move and dance.

I added a Spanish guitar intro solo to the song as well to introduce the listener to the journey we will be taking together on a Latin-inspired magic carpet.  I really wanted the listener to connect with my Santana influence in my guitar playing and percussive rhythms.