There were old-school Dead Heads, parents with their offspring and a smattering of first-time festival goers. It truly was a throwback ambience with everyone bonding together for the musical moments and end-of-summer merriment. 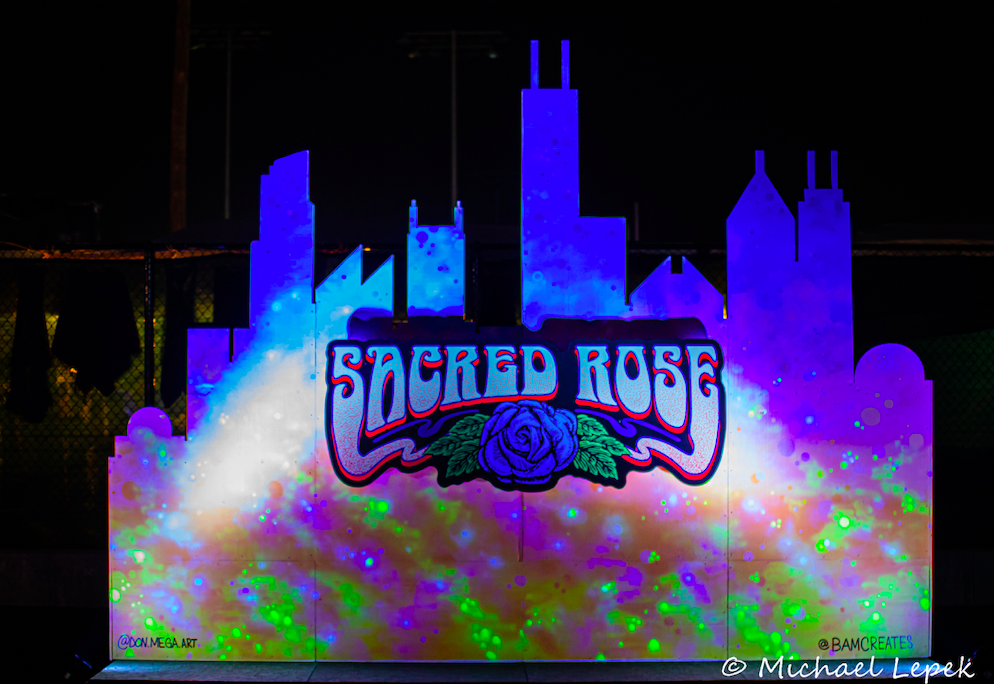 This is part two of our Sacred Rose festival coverage. You can check out part one here.

The second day of the first-ever Sacred Rose Fest was everything organizers and attendees hoped it would be. The weather was stellar, the bands were stupendous, and some schedule modifications helped with the sound bleed issues that had threatened to overshadow all the great acts that graced the three stages on Friday.

The original intent of the Sacred Rose festival was to bring back the peace and love spirit of the sixties. On this sunny Saturday, the groovy vibe was on full display as attendees from all over the country converged on Seat Geek Stadium in Bridgeview, Illinois.

Many came dressed in their festival best, which added to the joyful mood that prevailed throughout the day. There were old-school Dead Heads, parents with their offspring and a smattering of first-time festival goers. It truly was a throwback ambience with everyone bonding together for the musical moments and end-of-summer merriment.

The love-in and camaraderie extended to the featured artists as there were guest appearances throughout the day. Sierra Hull, who performed on Friday, came on to jam with Cory Wong who noted that “the great thing about these festivals is your friends come and join you.” Artist-at-large Margo Price performed with Goose as they did a great rendition of Marvin Gaye’s “Don’t Do It.”

The first stop was at the Vega stage to catch Lotus in action. This band came into being in neighboring Indiana but now divides their time between Philadelphia and Denver. Like so many other acts at Sacred Rose, Lotus is a multi-genre band that leans heavily into rock, electronica, hip-hop, funk and other influences.

The Disco Biscuits were next on tap, and they lived up to their jam band billing with a free-flowing set that gave new meaning to the “trance fusion” style that they’ve been linked to. The Disco Biscuits are another band that hails from Philadelphia and there was an overload of trance dancing and neighborly love throughout the course of their 8-song setlist.

As with other acts, you could catch samples of music made famous by sixties soul groups as the homage to that era continued to rule the day. During the Disco Biscuit’s set, snippets of Motown and the Sound of Philadelphia were in evidence when they took their turn on the Canopy Stage.

Then, it was over to the Dreamfields Stage to see what the Cory Wong buzz was all about. This multi-talented, Grammy nominated artist came out blazing and backed by a boisterous 8-piece band who were more than ready to bring the house down—which they did. Wong hails from Minneapolis and while some of his musical licks summoned up Prince-like sound bites, Wong and company have their own sound, style and turned in a truly captivating live performance.

Wong has collaborated with many artists of note and credits his music school background for being able to jump in and jam with a diverse list of bands. He came on with Goose who followed him on the Dreamfields stage where he joined them for a lengthy version of Goose’s original tune, “Hot Tea,” from their recent Dripfield release. The Connecticut-based band opened their set with an extended version of “Pancakes” before segueing into a seven-song set that included more cuts from Dripfield and older material.

The day’s perfect run of musical moments culminated with an incredible two-set show courtesy of Umphrey’s McGee. Formed in 1997 at Notre Dame University, this band cut its teeth at local Chicago institutions like the Vic and Riviera Theaters. Whether it was the energy from being back near their home turf or simply feeding off the appreciative audience, they put on an inspired performance that covered every genre of music but still left the crowd wanting more.