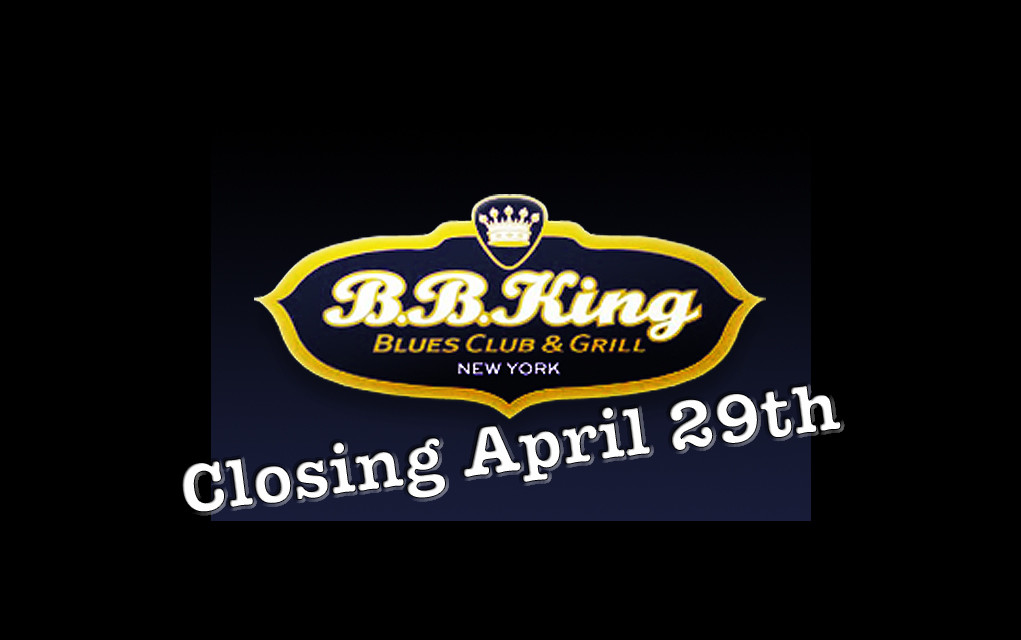 "...We feel extremely grateful for the overwhelming support we have received from both fans and artists over the years to create some truly historic and incredible memories in this space."

New York, NY — A blues institution will pass into history as the Times Square B.B. King Blues Club & Grill closes its doors on April 29th. Since opening in June of 2000, this venerated blues venue located at 237 W 42nd St. has showcased the biggest and boldest names in music for over 18 years.

Please note that all shows that had been scheduled at the club beyond April 29th are being moved to other venues throughout New York City. The popular Lucille’s Grill located inside the club will be open until April 29th and will host sets by B.B. King Blues Club All-Stars, Jon Paris, A Decade of Soul, and more.

The weekly Sunday Gospel Brunch featuring The Harlem Gospel Choir will give their two final performances at B.B. King’s on April 22nd & 29th. BB King’s is currently working with the group to find a new home for their weekly residency which will be announced shortly.

The venue is closing due to escalating rent at the current location and the process is ongoing to select a new Manhattan location for the club. Tsion Bensusan, Chief Operating Officer said:

It is with an extremely heavy heart that we share the news about B.B. King Blues Club’s closing. Despite many sold out shows, the location’s rent escalated to an unsustainable level, leaving us no choice but to close our doors. Unfortunately, this has become a growing trend in New York City, with other iconic music venues and businesses falling victim to opportunistic property owners.

This venue’s legacy extends much further than the stage, playing a role in Times Square’s revitalization two decades ago. It is a shame that wasn’t taken into consideration regarding its future in the area. Nevertheless, we feel extremely grateful for the overwhelming support we have received from both fans and artists over the years to create some truly historic and incredible memories in this space. We hope that we can find a new place to call home very soon so we can continue bringing live music to you all.

Tickets are on sale NOW!

Stay tuned for more shows to be announced here in the next few days.