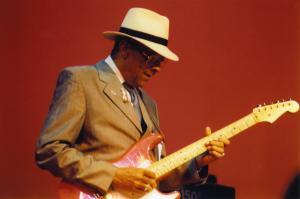 Keith played on Sumlin’s 2004 solo album About Them Shoes. He recently released a statement expressing his sadness over Sumlin’s death, saying “to me, he was an uncle and a teacher, and all the guitar players must feel the same as myself.” Since he was a young man, Richards has always loudly professed his close relationship to the blues; his autobiography being as much an homage to blues greats as to his hard-rockin’ lifestyle.

“Hubert was an incisive yet delicate blues player,” said Jagger. “He had a really distinctive and original tone and was a wonderful foil for Howlin’ Wolf’s growling vocal style. On a song like ‘Goin’ Down Slow’ he could produce heart-rending emotion, and on a piece like “Wang Dang Doodle” an almost playful femininity. He was an inspiration to us all.”

The Blues Foundation had previously made an open call to donate to the HART Fund for Hubert’s burial, with any remaining money to be allocated to other blues musicians in similar need. Though Hubert’s burial has graciously been covered by the Stones, readers should still consider donating to the HART Fund, a charity helmed by The Blues Foundation in Memphis that aides blues musicians in need, whether that need is rent, repairs, unexpected expenses, or funeral expenses.

Sumlin will be laid to rest Tuesday next to his wife in Washington Memorial Gardens, in Homewood, Illinois. At 8:00 pm that evening, Fitzgerald’s in Berwyn, Illionis is hosting a celebration of Sumlin’s life, with donations being collected at the door going to the HART Fund. Bob Margolin and Bob Corritore, both dear friends of Sumlin, will lead a jam in honor of the late blues great. Both men shared the main stage with Hubert in October at the King Biscuit Festival — Sumlin’s second to last public performance.

Donate to the HART Fund