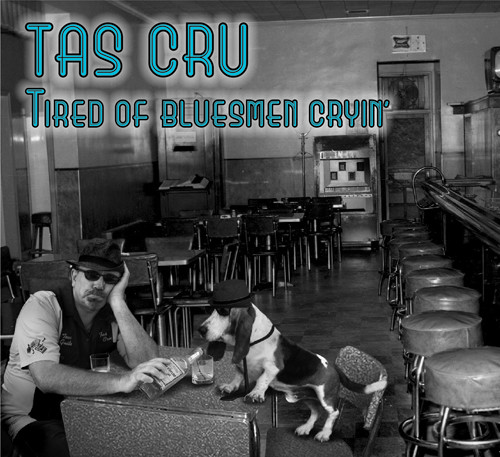 So where are you out of?

Cool! I’m looking at your latest album, Tired of Bluesmen Cryin‘. This is fun, you’ve got a dog on the cover gettin’ into your whiskey! Let’s talk about, first, what people can expect from this album?

Well, they can expect the usual thing I do, which is an ecclectic mix of different kinds of styles. I’ve got some rock and stuff, some cigar box kind of thing… get your mojo goin’, and some of the blues rock stuff!

This one is a little more high energy than the last one, but it’s pretty much the same thing that I do! People seem to like that!

But it’s upbeat! Let’s talk about the topic real fast! Why “tired of bluesmen cryin?”

Well I talked about this in great detail in the liner notes, which people can read, but the short story is that I work a lot with kids doing blues in the schools programs. I’ve been working with this kid and she likes to sing the blues and she’s into that, and I asked her the kind of stuff she listened to, and she said “well, I listen to it all, but I like more of the upbeat stuff. I don’t like the stuff too much about all these bluesmen cryin’ about everything that went wrong in their lives.” Not only that, she said from what she knows, a lot of the way they lived and the choices that they made, maybe they deserved some of it too, you know? So she said “I’m really kind of tired about bluesmen cryin’ about that kind of stuff!” And I tell you what, I said that’s the title of a song, right there! I was driving down the road away from that and that’s what I came up with! So I thank her for that!

Then I decided, when I put this record together, that I would go more for that kind of song. Songs that are more about the celebratory side of the blues… where people would sing their music and write the songs and dance to it and party with it… so they could use it as a way to get over the bad things in their lives! Get over their blues, not just lamenting about everything that’s going on. I’ve got a couple of them on there too, that’s just the way things go sometimes, but that’s kind of the feel in the album! Upbeat!

Let’s talk about your blues in the schools work, because this is pretty cool! I know you got a KBA nomination for some of the work you’ve been doing?

Yeah! Some people involved with a blues society here in New York State, Blues Society of Western New York in the western area. They kind of admire what I do and they put me up for that nomination. There’s a lot of great people out there doing this stuff… a lot of great people. It’s real important to continue doing this stuff. If we don’t turn this music over to generations, we’re in trouble.

We’ve got to replace ourselves eventually, you know what I mean!?

The program, Blues in the Schools, is fantastic, and I love what people are doing across the country. They continue to bring the music to the students and keep giving them perspective and allowing them to enjoy it.

It’s more than schools too! I like to talk more about blues education, because a lot of this takes place not necessarily in schools, but community centers, public libraries, after school programs, boys and girls clubs, things like that. Any time you’ve got kids gathering together, that’s a great place to do that. But in schools, the kids just absolutely love it, because it’s a much different kind of thing than they’re experiencing most of the time. Schools are tough place for everybody right now — kids, teachers and parents. So it’s nice to provide them a bit of a break from routine, so to speak.

You’ve been known as this “king of the triple entendre”! Can you talk a little about that?

Well I laugh about that! I had to figure out what the guy was talking about! “The master of the triple entendre!” It was in an interview in a magazine some time ago. It was kind of funny, then I had other writers try to tell me what they think that means and it’s kind of funny to hear different people’s interpretations of it!

But it’s simple: what it means, you’ve got double entendre in blues — that’s been a tradition for a long, long time. That’s when the lyrics would say one thing, but you know they meant something a little bit deeper or a little bit different.  Triple entendre is another layer! It’s what you mean when you write it, what the listener thinks you mean, and then what the listener thinks that it really should mean. That’s the third layer to that. And a lot of my songs make that kind of happen when they listen closely to those lyrics. I think it’s a compliment! I just do my best to try to live up to it, I guess!

You’ve been touring quite a bit this last year or two! The album has just come out… And you’re going to be touring next year?

Well I’m gearing up on some things to support the album right now! A lot of regional things. Up to the first of the year, there will be some touring up in the midwest, then the south, and then hopefully next summer, when festival season kicks in, there’ll be a lot of that too! So that’s what I’m looking forward to!

Like a lot of the guys right now, after festival season, we take a little pause, get geared up and get ready to go on!

Try to breathe again, sure. One of those places you’re going to be, and a lot of readers will be too is the International Blues Challenge! You’ve got a well-known jam during the event towards the end of January! Let’s talk about that for a second!

January 29th! I’ve been doing that for a while. We used to do it down at the Ground Zero Blues Club down in Clarksdale [about 70 minutes south of Memphis]. When IBC changed it’s format, where they start a day earlier, it made more sense to do it up in Memphis. So we do it at the Rum Boogie now! This will be our third or fourth year at Rum Boogie, and about five years at Ground Zero before that.

It’s kind of like the annual thing! Everybody gets into town, sniffing around Beale Street, getting a little BBQ, having a few drinks and getting to know what’s going on. It’s an opportunity for competing musicians to relax a little bit, play a little bit, get comfortable with playing on Beale. It’s a real relaxed atmosphere. We don’t do a showcase — a lot of bands will want to come in and do a showcase, but we try to mix it up. We get people from all over the world playing with each other! It’s amazing! It’s so much fun, and we go for a long, long time! Start at 8:00 and we go until the last cow drops! I’m tellin’ ya! 3:00-3:30!

It’s probably the only jam during IBC week that if you want to get up there and play, you get to. I’m proud of that.

So where can people find a little bit more about you?

They can go to my facebook page. Tas Cru Rum Boogie Jam! They can like that page and send me messages to me there. They can also get me on my regular Facebook page too.

Where can people pick up your album?

At the usual digital media outlets! I can name them all but you know what they are. They are iTunes, Rhapsody, all of that. Physical copies are through CDBaby.

Thanks a lot Tas, for taking the time to speak with us!