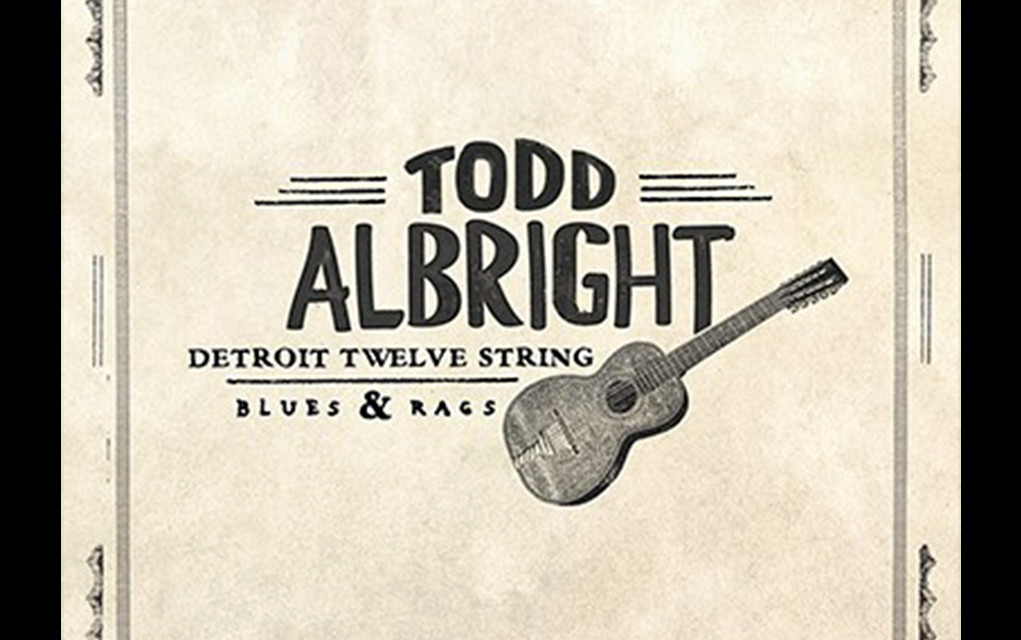 In the first part of our conversation with Third Man Records recording artist Todd Albright, we discussed masters of the finger-picked guitar, both originators, and modern players as well. We also examined how Albright strings, tunes and plays his twelve string guitar the way he does to achieve the tone and timbre he does. Albright also shared with us anecdotes regarding his previous and current recordings.

Here in part two of our conversation, Albright discusses why Jack White has been so important to the music industry in terms of preservation of music that otherwise would have vanished, and also in terms of innovation and moving the industry and music as a whole forward. He also opines on the state of affairs and music in his hometown of Detroit.

So how did that come about, you and Third Man Records?

I was sitting in Detroit, minding my own business, and they had just opened Third Man Records in Detroit. They had just started a thing called Third Man Books, a book imprint, and they were doing a poetry reading and wanted some music. I guess I was more or less a palette cleanser?

Sure, like they used to do in The Village.

Right. Exactly. That’s what that was. Jack [White] was there and I played two really short sets, three songs each, and when I came off my first set, they asked me if I wanted to do a record. Jack liked it.

The thing about Jack White is that he never rests on his accomplishments. You never know what he will be doing next. In that way, he is a lot like Miles Davis. He is always moving forward.

Just as Davis talked of his masterpiece Kind of Blue, that he had done it, and that was long ago, and he’d moved on, Jack is always moving on, moving forward, growing, working on new ideas.

It’s really great for the music.

Yeah. It’s not just his own work. His own projects aside, it’s what he does for music in general, and the artists on the label. From an artist’s perspective, you couldn’t ask to be on a better label – as well as they treat their artists and the amount they’re willing to promote, stick up for their people, push their projects. You’re not getting that anywhere else.

The other thing with him that’s really cool is his preservation vein, how he’s all about trying to preserve and bring music back and restore it so that things don’t vanish into oblivion. What Ted Turner did for the old movies, he’s doing for music.

Sure. Just think about what he and Dean Blackwood did with the Paramount Box sets.

Exactly. That’s not the only one he did. He did others as well.

Well thank God he’s doing it, otherwise, a lot of this would be gone!

Yeah. I mean, it’s not like the Paramount Box sets were gonna fly off the shelves. Those things cost a lot of money to produce.

I don’t know if he’ll make ANY of that back!

In the long run, he really doesn’t care because his point is, ‘OK, it’s out there, and the people that are gonna preserve this art-form are gonna buy it. And that’s all I’m concerned about.’

He was not concerned with sales at all. It doesn’t factor in.

No. It’s all about the preservation of the art form for him.

Where else are you gonna get everything recorded on Paramount records? All in one place? You’re not.

And that’s a beautiful thing to do for people.

It’s not just the music. It’s every ad, it’s every possible detail, every poster, everything. All the records are in those box sets. Incredible.

Let’s talk about your band, The Staving Chain. You also play other things besides Delta blues. You play Piedmont, you play country blues; I know you do. The description of your band says, “The Staving Chain, which specializes in the Delta blues.” I read that and I’m thinking about the music that I’m listening to you play, and I’m like, “No, they had to play more than that.”

Staving Chain was a string band that sounded like, what we attempted to sound like was the 1942 Library of Congress Recordings of Son House and Willie Brown. That’s what we were aiming for, and I think some of the time we hit the mark. I wasn’t the singer in that group; I was just the auxiliary guitar player. It was as ‘official’ sounding as it could be. I was that record was still in print, but …

I would love to get a copy of that.

I don’t even have any of them.

That was a string band?

It WAS a string band. It was two guitars, washboard player, a harmonica player, mandolin player, a zobo player. It was kind of a – it was a RUCKUS! I think there are some things on YouTube maybe.

Will you be doing any touring, and if so, when and where?

We’re doing an in-store at Third Man Records Nashville the same night as North Mississippi All-Stars are playing and Alvin Youngblood Hart (May 19th). That will be cool. We have a bunch of things in the pipeline, but nothing confirmed yet. The summer is gonna be busy. Folks can check my site. I’ll post about it, they’ll post about it, everyone will post about.

Here at American Blues Scene, when people browse around the site they see that in addition to blues, we write about rock, soul, roots, Americana…

I’ve been looking at it.

We try to keep our readers informed. We also try to bring some of this to new generations of listeners. The older blues fans, most of us are baby boomers. We’re gonna be gone eventually, so we try to introduce artists that are reviving the old music.

Or even taking the old music and changing it like John Mayer, and some of the newer artists. It’s great to play Muddy Waters note for note, but after a point, you have to move forward.

You can walk into any place and hear Muddy Waters being played by somebody.

And there are people that play it better than other people, but —

There’s no end to it.

We spoke with Eliza Neal a while back and she told us that Detroit was undergoing a revival; the music, various neighborhoods, and the people. What are YOU are seeing, and is it being accomplished?

I think Detroit has never gone through any kind of revitalization. It’s always existed. Musically, since Charlie Spand was playing piano in the twenties in Detroit, in the Black Bottom, Paradise Valley, it’s always been there. Then it moves on to Motown and the enormous garage rock scene that happened in the ’80s and ’90s. Then the White Stripes.

Every decade, Detroit has always produced something really important.

How about the city? Is the city itself coming back a little bit? The infrastructure, etc.?

You know, here’s the deal with that. So, the city is eighty, maybe ninety percent African American. It’s a Black city; it’s the blackest city in the country. Those folks aren’t being helped out. At all. Not as far as I can see. We elected the first white mayor in what, thirty years? Maybe forty years? What they’ve done is made the city center, the downtown area very safe and very comfortable for white people, who don’t live there.

The jobs that are opening up there are mostly low-paying service jobs; there’s no industry anymore. That’s gone; that will never come back. Factories are done. That’s never gonna happen again. It’s incredible to me that you’re seeing condos being sold for hundreds of thousands of dollars in the Cass Corridor, which was one of the roughest neighborhoods in Detroit at one point. Now, you’ve got condos going up that are selling for $350,000, and it’s like, ‘Where’s this money coming from?’ It’s a bubble; I don’t know what’s gonna happen, and I don’t think anybody knows what’s gonna happen.

Almost exactly a repeat of what took place in New Orleans?

Exactly. Exactly. Think about this. What happened in the ’60s, with the interstate projects. You’ll notice that all the interstates in the country are driving right through what used to be Black neighborhoods. They ’eminent-domained’ the whole thing and flattened all the houses, and put the interstate right where they did it on I75 going through Detroit. They did it in Atlanta. They’ve done it in anywhere there’s an interstate. They always run it through the most impoverished neighborhoods they can find.

So, has this climate affected the music in any way that you can see?

I don’t think so. I think it’s not improving it, but it’s not any worse for it.

So, it’s still basically thriving and growing and changing as it always has?

Yes. It always will. I think that maybe things will change a little later on. You have to realize that people emigrate to the next largest city. Detroit WAS always it, in this area. It was really cheap, so it was affordable to do what you love to do and you could get by on a lot less. I think that’s gonna change. I think that as housing prices increase that artists go elsewhere. They leave; once things start to get too gentrified, they’re gone. They will move on to the next affordable place.