Blues From The Top Festival Is a Labor of Love 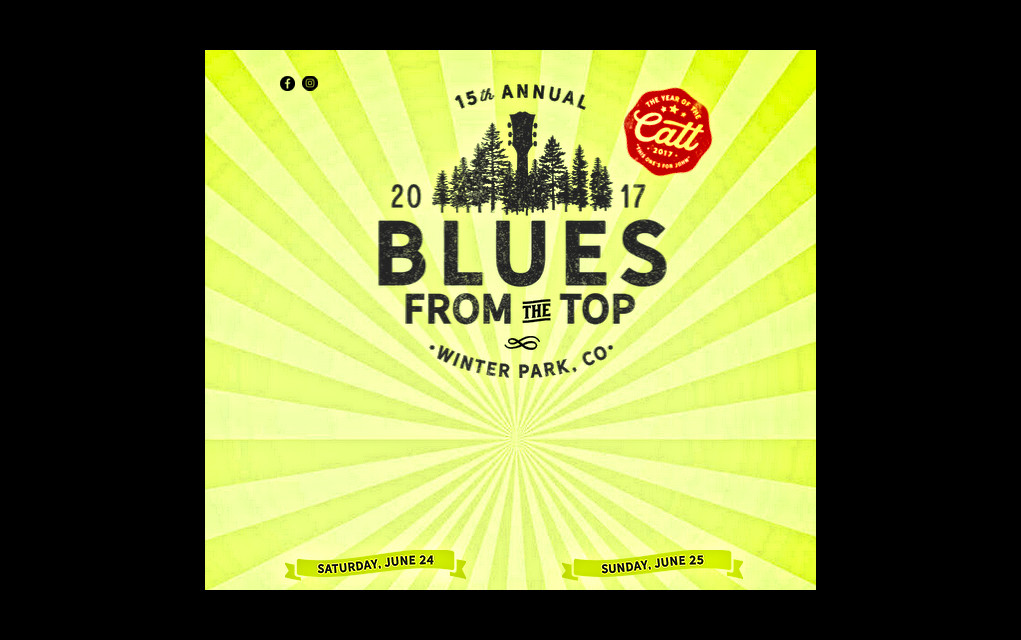 Blues festivals are a great way for blues lovers to gather together and share their love for live performances of the music they enjoy so much. It’s a great way to “Leave your worries on the doorstep” and experience exciting music and good food, all while helping to keep the blues art form alive and well.

For the Grand County Blues Society and the good people of Winter Park, Colorado, keeping the blues tradition alive and bringing the blues to others is a community effort. This year Winter Park will host the 15th Annual Blues From The Top Festival, founded by the late beloved blues evangelist John Catt and the GCBS. Treasurer Art Farrari recalls, “Around January 2003 I think, we started thinking would it be cool to do a one day blues festival. And folks were silly enough to say ‘Sure. We could do that!’ Our founder, John Catt, started looking at all the different bands we had here at the bar where we were producing shows, and went through and picked five bands that had been here and had played. This way our locals would know who these people were, when it came time for helping us promote the festival.”

As many of you may know, starting, organizing and promoting a new festival is no easy task. The first Blues From The Top Festival was no exception as Farrari concedes. “We then went and attempted to get a venue, thought we had a venue, and then that fell apart. Then a very small ski area that’s here kinda came to our rescue, allowing us to put on the event at the base of their ski area. The name of the ski area at the time was Sol Vista.

“So we went about promoting and organizing our first blues festival in the summer of 2003. We did all of the introduction efforts and ended up with about 500 people showing up. And, we took about a $10,000 loss. We were able to get some funding, so we did not have to renege on any contracts or anything. Through building our blues society over the next couple of years, we were able to repay any debts.”

It took time to pay these debts though, and this was accomplished through many entities coming together. Farrari says, “For the most part, I would say that we’ve been profitable from then on. We had one or two years where we would break even, but we’ve been able to make a little bit of money to help with our other efforts throughout the years.”

What makes the festival a true labor of love that the entire community takes part in is that the proceeds go to fund programs that help the community and the blues as well. These programs include Blues In Schools, monthly community blues shows, and to an extent, Blue Star Connection.

Farrari says that festival proceeds “allowed us to have money in the bank for future festivals – a cushion reserved for future festivals. It has also allowed us to continue doing our Blues in Schools program and our monthly blues music shows. Our mission has always been to bring national and international blues talent to our mountain community. You can probably say that it also assisted Blue Star Connection in it’s early years.

“For the last eight, nine years, Blue Star [Connection] has been self-funding. That is very intentional. The services that Blue Star [Connection] provides do not impact our local community here very much, so we consciously decided to not raise local funds since we are a small, under-serviced community in the first place. We didn’t want to tap our local funds for something that was a national program.”

“They are in 57 different hospitals in the Music Therapy Centers for children’s hospitals. I call John and the others the Blue Star Connection Guardians, who are the people that go around and arrange their funding to buy the musical instruments that are donated to the different children’s music therapy programs.”

And those monthly blues shows? Those are held at Smokin’ Moe’s featuring national blues artists that in the past have included the likes of James Cotton, Tab Benoit, Marcia Ball, Jimmy Thackery, Joe Bonamassa, Samantha Fish, Mike Zito, and many more. According to Farrari, as many as 300 people attend these shows, bringing blues to the Winter Park community.

Another program the festival proceeds support is Blues In Schools. Chavez speaks of her early days in the GCBS and how she came to be involved in Blues In Schools. “We live at 9000 feet in a small town that is totally booming, so it’s not so small anymore. John [Catt] was tired of driving around looking for music, so that’s when he said ‘Why don’t we bring music here?’ A year after, he had this idea. I moved up here, and he was talking about how he was involved with music and concerts, and with kids. I love music, concerts, and kids. He was saying how hard it was to get the Blues In Schools organized with somebody who is passionate about it.

“I took that and ran with it. I decided to join the board to make everything successful, and it was great! I became the director of the Blues In Schools and brought in national and regional artists to the school system to educate young kids about the origins of blues music. I also facilitated and made John’s goal a reality: One time, every kid in Grand County was given a harmonica. There were lessons and the whole nine yards.”

So how far has the festival come from its humble beginnings? With a well-deserved sense of pride, Farrari points out, “From that 500 folks we’ve grown it into a two day two nights festival, attracting 2500 hundred folks per day. Our goal is to continue growing the festival and continue producing an award winning event. We’ve gotten some Colorado awards, and Colorado Blues Society voted us best blues festival in Colorado. We are continuing to try to get a nationally recognized festival. We are also trying to keep it profitable; either expand the festival itself or continue to fund our current local program.

“There were three of us that were the main producers of the festival. One, our founder, John Catt passed away. Another woman that was on our board resigned from the board this past year. Two new board members have now stepped up, so there’s still three of us that are primarily involved.” Those two new members are Maria Chavez and Tim Hubbard.

Chavez explains how John Catt influenced the festival in the past, and now, going forward. “Interestingly enough, Blue Star again is about kids with cancer primarily, and other life-threatening illnesses. John Catt was always one to take things and run with it, and he came down with his brain tumor, and he realized that he was the oldest Blue Star. At that point, little did I know that last year he told us that that was going to be his last festival because he wanted to concentrate on Blue Star and take it to even another level.

“This year, everyone on the board also realized that it’s an aging blues crowd. So, we also want to expand what blues is and not just bring in 12 bar blues, but extend it to rock and blues, like for instance, Anders Osborne, which is still very blues-centric, but has more of a jam and a rock base. We want to educate people that blues is the root of all music. So, what is that, and showing the flower of the different sounds that it creates.”

When asked what the community thinks about the festival Farrari offers, “I think the community is very proud that their local resources can help us produce this event. It’s also the first major festival of the summer season for our community.” Chavez adds, “The blues festival is a blues family that includes the fans that have come together with all of us, partnering to make it a success. We are planning to move forward stronger and harder, and continue on the great path that we have been on.”

Blues From The Top