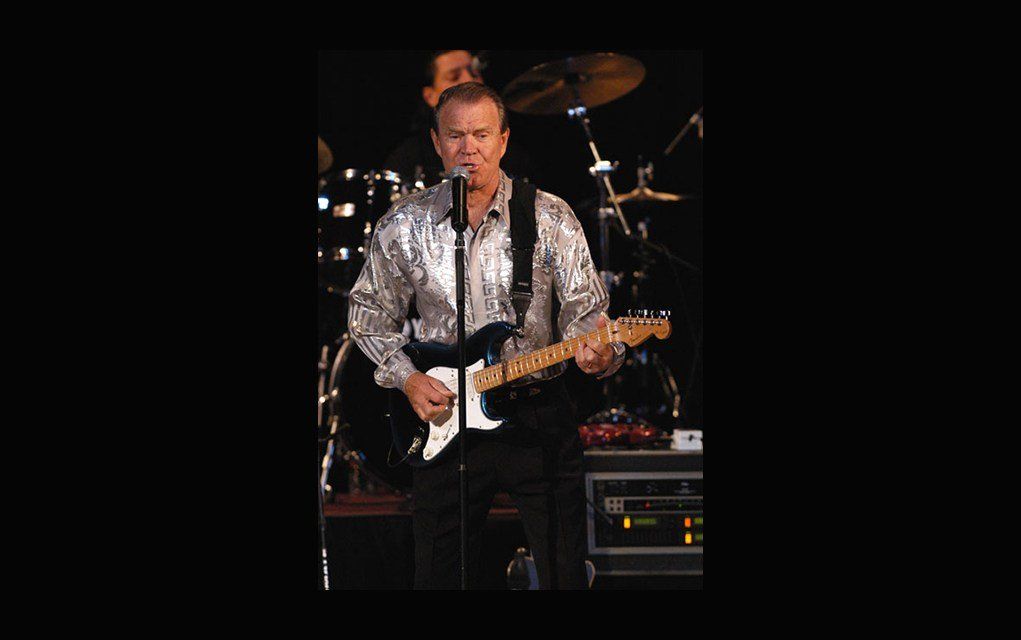 Nashville, TN — Glen Campbell, whose numerous hits include “Rhinestone Cowboy,” “Gentle on My Mind,” “Wichita Lineman,” “Galveston,” and many more has died. Campbell was 81 years old. He is survived by his wife, Kim Campbell, and 8 children.

Campbell announced he had Alzheimer’s in 2011, and had been bravely battling the disease ever since. A statement on the Glen Campbell (Official) Facebook page read:

It is with the heaviest of hearts that we announce the passing of our beloved husband, father, grandfather, and legendary singer and guitarist, Glen Travis Campbell, at the age of 81, following his long and courageous battle with Alzheimer’s disease.

In lieu of flowers, donations for Alzheimer’s research may be made to the Glen Campbell Memorial Fund at BrightFocus Foundation through the donation page at Careliving.org.

The family appreciates your prayers and respect for their privacy at this time.

Heartbroken. I owe him everything I am, and everything I ever will be. He will be remembered so well and with so much love. pic.twitter.com/1Z8mm8Jzth  — Ashley Campbell (@ashcambanjo) 8 Aug 2017

Aside from his many hits, Campbell also hosted his own TV variety show from 1969 to 1972, The Glen Campbell Goodtime Hour. Just as Jimmy Page was rock’s most in-demand session player, prior to being a country and pop star, Campbell was country music’s most in-demand session player, known for his speed, ability, and uncanny ear. For someone who really didn’t read music, he could play. Drummer Hal Blaine said, “Glen Campbell didn’t really read music. He could look at charts and get a sense of what was going on, but everything he did was by ear.”

When Brian Wilson decided he didn’t want to tour with the Beach Boys any more because he wanted to spend more time in the studio writing, Campbell replaced him on guitar out on the road. In 1969 he stared alongside John Wayne in the hit movie True Grit.

Campbell was blessed with incredible writing and performing talent, and he made the most of it. Over the course of his career he received many accolades. He won 10 of the 21 Grammy Awards he was nominated for. He won 10 of the 11 Academy of Country Music Awards he was nominated for. He also earned three American Music Awards, two Country Music Association Awards, and three GMA Dove Awards.

He wrote his memoir in 1994 titled Rhinestone Cowboy. The Glen Campbell saga had its rough patches too. Drinking, drugs, multiple marriages, and other issues caused difficulties for the singer at various junctures. His life improved immensely when he married former Rockette Kim Woollen, who was instrumental in turning his life around and helping him get back to being the best person he could be. There were still occasional stumbles to be sure, but for the most part, Campbell raised up, cleaned up, and brought the best of himself he could summon to each new day.

When he did let the world in on the battle he was fighting in 2011, he released his Ghost on the Canvas album, touring in support of it, and as a thank you to all his many fans who had supported him throughout the years. The documentary Glen Campbell: I’ll Be Me depicted the strength and courage he showed during that last tour. The song “I’m Not Gonna Miss You,” was nominated for an Oscar.

Throughout the online universe, many are paying respects to their friend and mentor:

Thank you @GlenCampbell for the artistry, grace & class you brought to country music. You were a shining light in so many ways. — Brad Paisley (@BradPaisley) August 8, 2017

I’m very broken up to hear about my friend Glen Campbell. An incredible musician and an even better person. I’m at a loss. Love & Mercy. — Brian Wilson (@BrianWilsonLive) August 8, 2017

Glen Campbell was one of the greatest voices of all time. I will always love you, Glen! pic.twitter.com/LQFEWA42lF  — Dolly Parton (@DollyParton) August 8, 2017

Very sad to see Glen Campbell go after a long goodbye. He and his music will always be with us. Thanks, Glen. Rest in peace.  — Clint Black (@Clint_Black) 9 Aug 2017

Sad to hear Glen Campbell passed. He was a GREAT guitar player, and a great person. Rest in peace my friend- Thanks for all the music. — Joe Walsh (@JoeWalsh) 8 Aug 2017

The Alzheimer’s Association posted this: