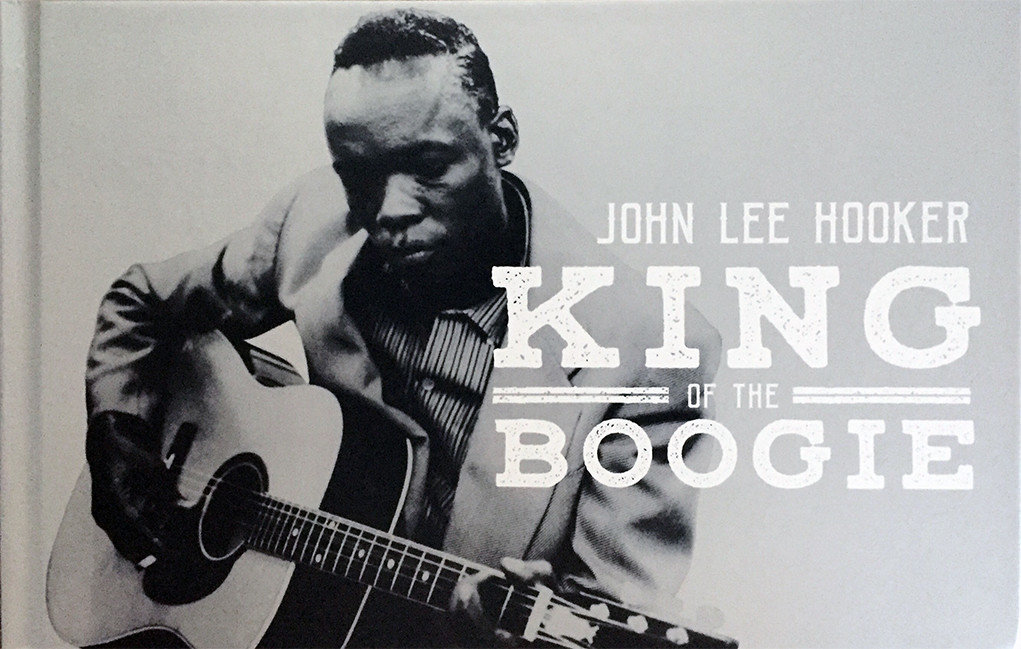 Recently, the 5 CD set King of the Boogie John Lee Hooker arrived in my mailbox. As I opened the package, I was instantly transported back to the holidays of my childhood when I opened my gifts and was so excited…

The set lives in a 56 page hardcover book that also serves as a case protecting the CDs from the perils of the outside world. The book is a treasure trove of treats for John Lee fans of all ages. There are photos throughout, along with new liner notes by historian Jas Obrecht. There are also liner notes by John Lee’s longtime manager and friend, Mike Kappus.

A great deal of anticipation washes over me as I press play and settle in for what I hope to be a blissful communion with the power and wonder that is John Lee Hooker. John Lee has been with me through schools, marriages, divorces, 20 years in the military, good times, bad times, and everything in-between. I was so looking forward to this.

Even at 100 tracks, King of the Boogie only represents a cross-section of John Lee’s work, but what a marvelous cross section it is! Disc 1 began with the 1948 recording of “Boogie Chillen'” and then moved right on into “Sally May,” also recorded in 1948. That was followed by “Hobo Blues,” and by now the hairs on the back of my neck were standing at attention! I was firmly seated in the church of blues, and John Lee was preaching The Word. Then strains of “Crawlin’ King Snake” filled the room, and so it went, on and on with each performance better than the one before it. “Black Man Blues” shook me to my core, leaving me breathless. There is a reason that John Lee communicates on a spiritual level with so many people; he speaks to the universal soul that lives in all of us. And there is more; so much more.

Other interesting tracks on Disc 1 include the original of “I’m In The Mood” (as opposed to the later version with Bonnie Raitt from The Healer album), the infectious “Huckle Up Baby,” and the almost Rock ‘n Roll of 1953’s “Wobbling Baby.” “I’m A Boogie Man” has a rock ’em, sock ’em edge to it, and there’s “Shake, Holler And Run,” a rousing take off on “Shake Rattle ‘n Roll.”

While I listened, I read through the liner notes and the quotes that are interspersed throughout the book as well. The essays are informative, and the quotes show how much John Lee meant to his peers and disciples.

“Boogie Chillen” grabbed a lot of people’s attention back then because in those days you couldn’t turn your radio on and find a guitar player every time you changed the dial.

Traveling through Discs 2 and 3, there are still more gems including, “Unfriendly Woman (aka Stop Now)” with Jimmy Reed on harp, and Eddie Taylor on guitar; an enticing version of the traditional “When I lay My Burden Down,” and a take on “Good Morning lil’ School Girl” that is almost a holler accentuated by acoustic guitar urging the song onward. There’s also a bare-bones rendition of “Will the Circle Be Unbroken” dripping in echo and reverb-drenched guitar that is just so satisfying!

“Boom Boom” opens Disc 3, and my whole face lit up with a smile. Among those joining John Lee on the performance are Funk Brothers favorites Benny Benjamin on drums and James Jamerson on bass! “Blues Before Sunrise” follows and it is achingly good! There’s John Lee’s boogie version of “Money,” and a Chicago down-and-dirty-in-the-alley “One Bourbon, One Scotch, One Beer” that’s perfect. “The Motor City Is Burning” is electrifying with John Lee joined by Buddy Guy on guitar and Eddie Taylor on bass. “Early One Morning” is downright seductive and Deacon Jones kills it on the organ. On “Deep Blue Sea,” John Lee lets us know that he can make an acoustic guitar boogie just as well as an electric.

Disc 4 is the Live disc. It opens with a poignant telling of “The Hobo,” and further on there is a juggernaut go at “Boogie Chillun.” Later on, a positively haunting “You’ve Got To Walk Yourself” holds attention and a spry “Boom Boom” tears it up.

John Lee Hooker just drives me crazy. When I hear him, I get fever and chills.

For me, the high points on Disc 5 (Friends) were “The Healer” with Carlos Santana, “I’m In the Mood” with Bonnie Raitt, and a towering, grand performance with B.B. King on “You Shook Me.”

With John Lee, there’s no front. He’s just a bare soul. There’s no dressing to his music, and his chord changes are feeling and sincerity.

Again, this is just a cross-section of John Lee’s career, and as such, it cannot possibly include every song that each one of us feels should be here. But, there are rarities and unreleased tracks included.

Everything about King of the Boogie is well done from the book / case, to the essays within, to the listing of the recordings, and the selections themselves.

King of The Boogie