Jorma Kaukonen to Connect With Fans on Three Streams This Weekend 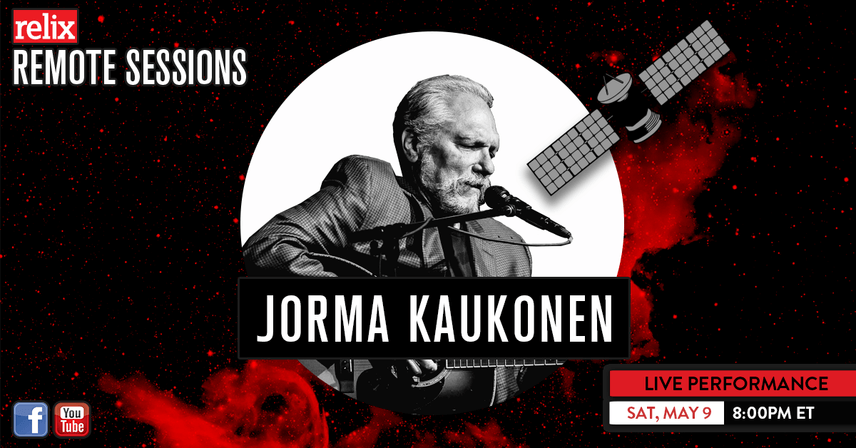 GRAMMY-winning legacy artist Jorma Kaukonen is all over the internet. On Saturday night at 8 p.m. EDT, Jorma and Relix Magazine team up for an online performance, the 6th solo Quarantine Concert from Jorma’s Fur Peace Ranch in Meigs County, Ohio in an event billed as “spreading the message to Stay in Peace!”  The concert is part of their Relix Remote Sessions. Jorma will perform, tell stories and talk about his songs, often playing them on the very guitar he wrote the song on.

Partnering with Relix Magazine is a smart move for Jorma. Relix is the contemporary how-to catalog for the independent hippy ethos that created an alternative lifestyle born out of the Haight Ashbury section of San Francisco in the mid ’60s. The Haight nurtured a pioneering spirit made up of musicians unfettered by the conventions of postwar American society ready to rewrite the very fundamentals of everyday life.

It’s going to take a similar view of freedom for music to function and thrive in the wake of the pandemic. The Live Nations of this planet do not work now and will not work in the new normal that will rise out of the horror of an invisible enemy that punishes mass social gatherings. Musicians by the thousands, both regional to international, are using the internet to connect musically, but not physically. 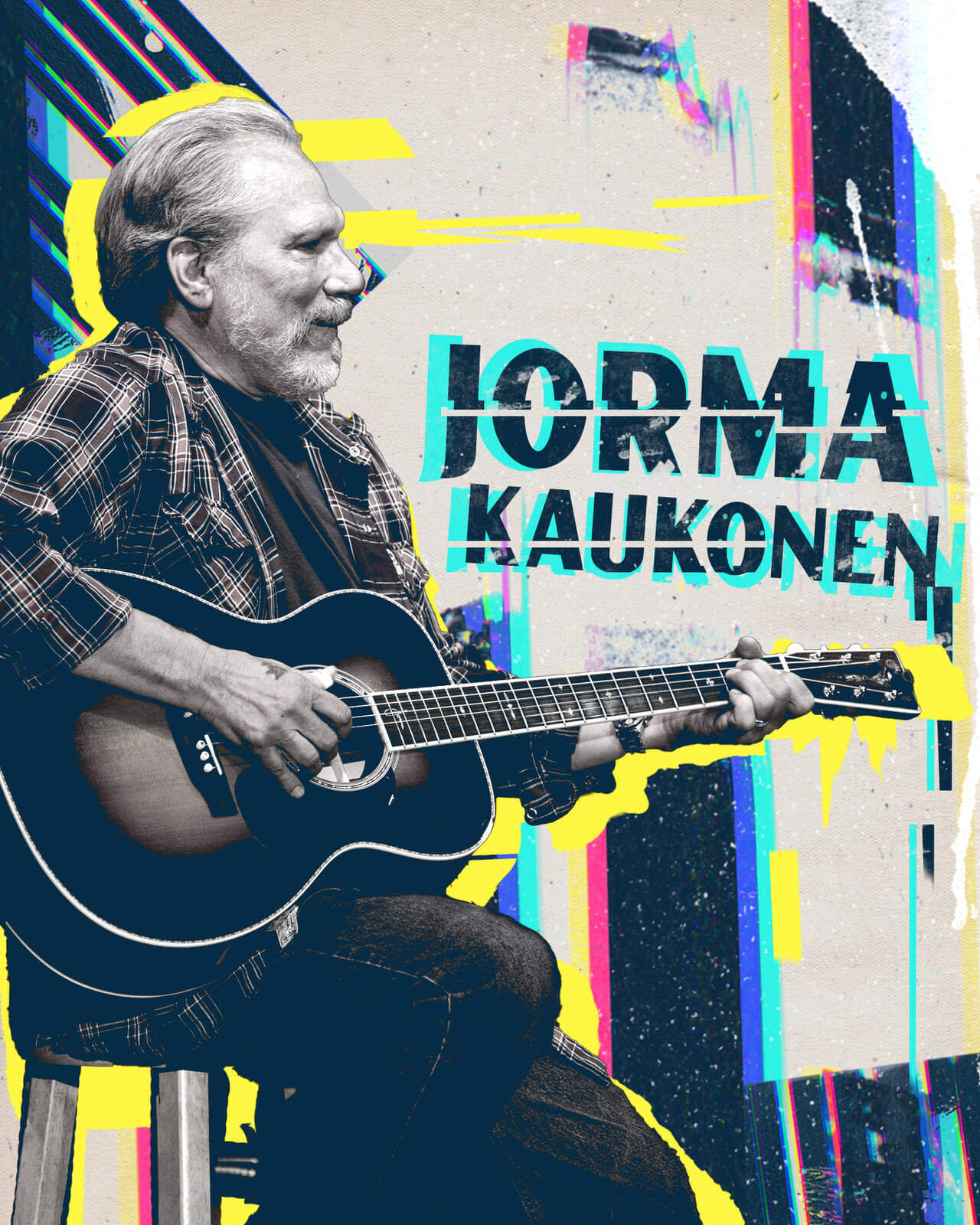 Jorma, member of the Rock & Roll Hall of Fame and a GRAMMY recipient, has spent more than half a century redefining “real music” through massive changes in the music business. His first professional gig was with the Jefferson Airplane in San Francisco in the mid-60s. He claims their repertoire was so boring to him that had he not been stoned at the time he never would have persevered with that band. But the creators of Surrealistic Pillow laid the foundation for his long-term success.

The Airplane were the first psychedelic band to enjoy international mass acceptance. They created a large enough market for the Grateful Dead to ultimately succeed while they (The Airplane) deteriorated into a mass market pop confection called the Jefferson Starship.  By that time, Jorma with bass player Jack Casady had moved on to the more granola friendly Hot Tuna, a band with two alter egos, one electric and one acoustic. More than half a century later, Jorma, largely with Hot Tuna, still volleys back and forth between electric and acoustic shows and fits comfortably as legacy forebearers of the eclectic and more recently named Americana style.

Jorma is to roots guitar what Keith Richards is to blues guitar. Both borrow from heritage masters of the first half of the 20th century American roots artists without slavishly copying them. If The Beatles built a mass awareness of the rock and roll that inspired them and created the British Invasion that built a foundation for The Rolling Stones’ ultimate success as “the world’s greatest rock band,”  the Jefferson Airplane did the same for Hot Tuna’s take on American folk and blues songs.

Just as the Jefferson Airplane and Hot Tuna made use of then new technology to deliver mass acceptance of music born out of a previous generation’s front porch jams, Saturday night fish fries, and chitlin circuit night clubs, the survivors of today’s pandemic are already building a new order with the current technology that allows us all to be together emotionally while surviving apart physically.

Of the cooperative efforts, Relix comments, “Clearly not content on resting on any of his legendary laurels, Jorma Kaukonen continues to find ways to wed his muse to the right material and create a colorful tableau.”

Jorma Kaukonen will also take part in Blues/Gospel Icon Reverend Gary Davis online at the NYGF on Sunday, (May 10, 2020) at 4 p.m. EDT via the New York Guitar Festival YouTube channel.

Reverend Gary Davis: In Search of the Harlem Street Singer will be presented live on YouTube, the twelve-song series commissioned a diverse group of stellar artists, to explore the music of blind blues musician Rev. Gary Davis.

“I never studied with him,” says Kaukonen. “I couldn’t afford the $3 an hour he was charging back in those days (’59 or ’60), but I did see him play a lot. I met him, and he was an important man in my life. Still is!  He had incredible depth, the artistic power of the man. I mean he was a strong personality, musically and as a man. I believe the Reverend is one of the important not just guitarists but musical figures in American music in the last century. I just think he’s incredibly important.

“The Reverend’s style is so idiosyncratic, and people who are Rev. Gary Davis specialists that have really gotten into it in some ways capture that. I mean, listen, I’m a white rock and roll player who plays some blues and stuff, and I like things to be in fours, and I like the meter to be moderately consistent. The Reverend is very, very sophisticated, and I just couldn’t get that. I’m always telling my students, most of the stuff I accomplish as an artist is a result of my inadequacies rather than whatever skills that I might or might not possess.

“Rev. Gary Davis actually was a street singer, Jorma told me in 2016. “If he could have plugged in and been louder on a street corner in Harlem, you bet your ass he would have. Some people say, ‘Well, the Rev. never did it this way.’  I saw it. The Rev. played on the street a lot. I’ve heard him on the street, and he was a loud guitar player and a powerful, strong man, and I suspect had he lived in these more technological times, he would have had some battery-powered something.”

Last but not least, Jorma will also be performing at the co-produced City Winery All Stars and Billy Bragg Mother’s Day concert that will be broadcast on YouTube on Sunday, May 10, beginning at 2 p.m. Pacific/4 p.m. Central/5 p.m. ET/10 p.m. UK.  A private YouTube concert viewing link will be e-mailed to all ticket buyers two hours before the show begins on Sunday, May 10. 100% of net ticket proceeds will be donated to the United Nations Foundation fund. Read more.

Quarantine Concert #6 goes live on Saturday, night at 8 p.m. EDT at link below: