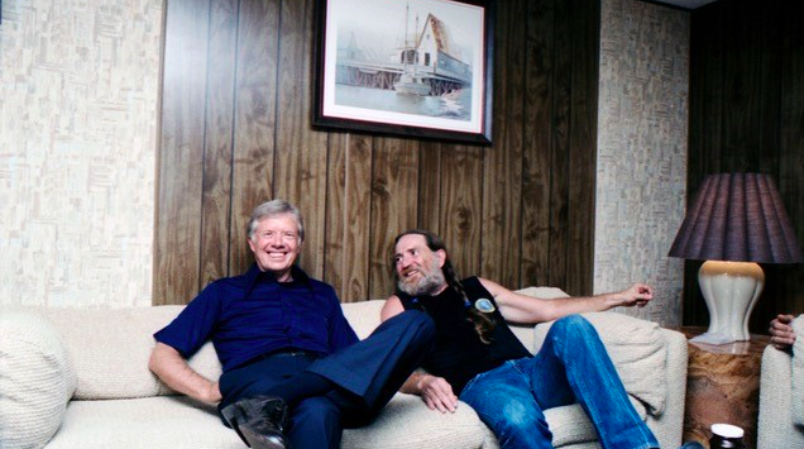 So, here’s a 90-something-year-old Jimmy Carter in front of a camera with a shit-eating grin on his face admitting to the world that his son smoked pot with Willie Nelson in the White House when Dad was president in the late ’70s.

Gregg Allman stares into the camera and recalls coming in late for a meeting with Carter, finds him dressed in torn jeans and proceeds to down a whole bottle of whiskey with The President. Still smiling that Cheshire cat grin, Carter suggests that Gregg’s memory may contain a bit of hyperbole in that he, Carter, was drinking wine at the time. Nevertheless, the two-hour CNN special Jimmy Carter: Rock & Roll President has footage of Carter introducing The Allman Brothers to an audience in 1976 when they performed one of several benefit performances that helped pay for advertisements that got him elected.

I was 32 years old and had been reviewing rock and roll for several local and international newspapers for seven years when Carter was elected president, but my memory of him was that he was a mild-mannered peanut farmer from the backwoods of Georgia who incidentally had a degree in nuclear engineering.

Footage of him at the time almost always found him with that patented grin seemingly permanently painted across his face, but at the time I dismissed it as a good ole boy declaration of innocence. Little did I know that he was hobnobbing with Dylan who was questioning him about his views on Christianity at a time when he, Dylan, was writing songs about his own conversion. Or that Carter was so familiar with both southern gospel songs and country hits of the day that he could sing along in church without opening the hymnal.

To say that this two-hour special is an eye-opening revelation of musical tipping points during the 39th President’s time in office doesn’t give the documentary enough credit. This is a backstage pass that’s as interesting musically as it is as a historic document. One might expect such a presentation on a news network like CNN would tend toward a more perfunctory evaluation of his term in office. Far from it. Because Carter was a sitting president at the time, the cameras were often rolling. There is much footage featuring performances with him interacting with everyone from Mahalia Jackson to Dizzy Gillespie who has a wang dang doodle on stage, with Carter injecting the words “salt peanuts” into the jazz master’s performance of the song.

Toward the end of this extravaganza, it is stated that Carter lost a second term to Ronald Reagan who took 486 electoral votes to Carter’s 52 in 1980, denying Carter a second term. And that the day Reagan took office, Iran released the 52 American hostages they had been holding in what at the time seemed an eternity.

But history has been kinder to Jimmy in the intervening 40 years. His work with Habitat for Humanity, rolling up his sleeves to build homes for the homeless well into his ’90s and his stint as a preacher in his hometown of Plains, Georgia and conquering cancer in the process have endeared him to fan base who would love to see a man with his integrity and commitment to societal betterment in office right now at a time of great social divide and unrest.

I will always remember telling my mother late in her life that I was on my way to Arkansas for the King Biscuit Blues Festival but would be back in a week to visit her in the nursing home. “Ahkasaw,” she said in her thick Bostonian accent. “Yah fathah nevah went to Ahkansaw.” To many in my mother’s world, the deep south might as well have been a different country. Jimmy Carter taught us in the north that Ray Charles’ “Georgia on My Mind” was a welcoming clarion to the world. This documentary proves it many times over.

Carter in his inauguration speech shown in this program says “I want to thank my predecessor for all he has done to heal our land.” Gerald Ford beams. He had brought us out of the nightmare that was Nixon’s impeachment. Ford was a Republication and Carter a Democrat. Can you imagine such a scene today?

The list of artists and the backstories of their involvement with the Carter administration, plus the performance footage, makes the two hours of this show pass in a flash. They include Paul Simon, Aretha Franklin, Jimmy Buffet, Bono, Barbara Mandrell, Garth Books, Charlie Daniels, The Marshall Tucker Band, Lynyrd Skynyrd, Rosanne Cash and The Staple Singers.