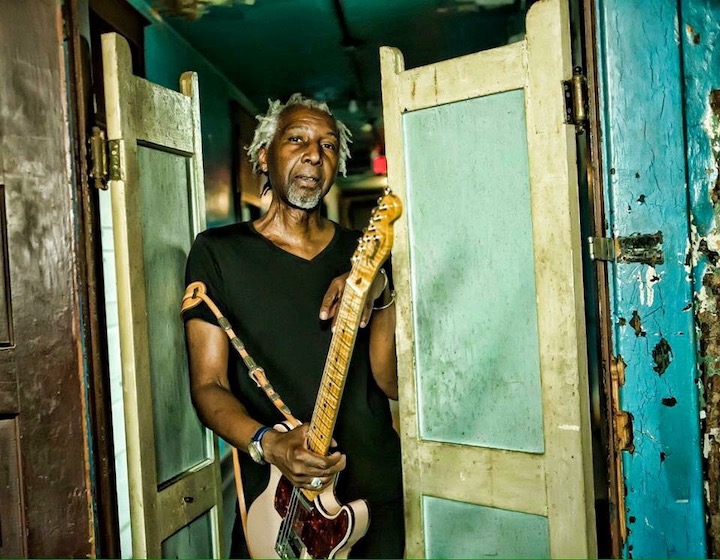 If you’re one of those people who measure success in music by the size of your fan base or the number of records you’ve sold, then Eddie Turner is far from the top of the food chain. As he puts it, “If everybody got what they thought was coming to them, nobody would take out the trash.”

Give his latest record Change in Me the blindfold test, however, and chances are you’ll put it next to the best of Hendrix. His sound is awash in swirling colors on a rollercoaster that needs no seatbelt. He takes us there on his cover of Jimi’s “My Friend.” And his musical history goes back almost as far as Hendrix’s. 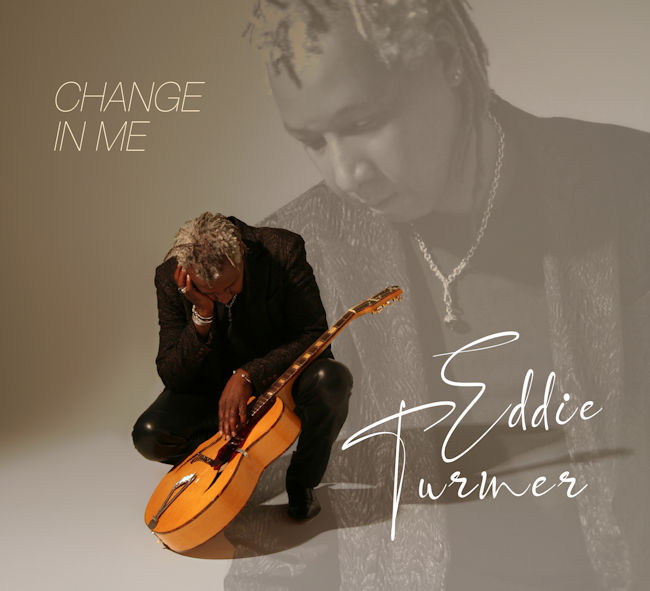 Eddie spent 10 years with Otis Taylor (from 1995 to 2004) who gave him the nickname Devil Boy. “Otis and I have an adversarial relationship,” he says simply, “’cause I always used to piss him off.”

I first booked Otis into an old Civil War Museum on the Rensselaer Polytechnic Institute campus in Troy, New York in the mid-90s. The show so blew away the attendees that nearly everyone in the place bought a copy of the CD When Negroes Walked The Earth.

The two met when Eddie was 13 and Otis was 21. Eddie had won a two-week, all-expenses paid trip to the Aspen Design Conference for his artwork in high school and was staying at his former babysitter’s home there. “So, I was hanging out at this house. I’m at the door, and there’s this big black guy standing out there. I looked at him and said, ‘Can I help you?’ He said, ‘Is Eve and (her husband) there?’ I said, ‘No, they’re not here.’ I’m 13 years old and was always told don’t let strangers in. I didn’t know this guy. So, he says, ‘Can I come in and wait?’ And I said no. He says, ‘Come on!’ I say, ‘Me, I don’t know you. You say you know them, but I don’t know you.’ When I joined Zephur, he was around all the time. So, you know that’s my Otis Taylor story. He’s a nice guy.”

Zephur was a mythic band that once featured the much underrated and erratic Tommy Bolin on guitar. The centerpiece of this late period psychedelic group was a singer named Candy Givens. “Candy was the boss,” recalls Eddie. “She was a genius. She was a hard driver. She knew what she wanted and she was generally right.”

I asked Eddie if Candy thought she was going to be the next Janis Joplin. “No. She was going to be Candy Givens. She was better than that. She was great. Candy drowned in a hot tub. She had a boyfriend that was bad for her, and they used to get high all the time.

“Even though they had a tumultuous relationship, Candy and (bass guitarist) David (Givens) together were just an unbelievable powerhouse. People would go, ‘Well, Eddie, you’re just an asshole.’ Well, I kinda learned it from those two because if you don’t see what you want, you don’t get it. And that’s what they were like. The two of them together I felt were genius.

“It was a great band, and I was lucky because the three of us wrote that last record together. If you listen to the last Zephur record, you can hear all of my records in the record because I’m the pop guy. I love pop songs.”

After Candy died, Eddie walked away from music for 10 years. “I had a new girlfriend, and being a musician was not in her program,” he says with a chuckle.

Eddie recorded five albums with Otis Taylor before going solo. Listen to his work with Otis and his subsequent releases, and you realize they are joined at the hip.

Change in Me includes a version of Muddy Water’s “Hoochie Coochie Man.” Eddie met Muddy as a young man in Boulder, Colorado. “I didn’t know Muddy from anybody, you know what I mean? I’d never met him personally ever before. I walked through the door, and to the left as I recall was the band’s dressing room, and they were all in there playing cards, and I don’t know why he said it, but he said, ‘Come here, young man,’ ’cause I was the only black guy in the room. So, I walked in, played a hand of cards, and realized I had just played cards with Muddy Waters, and I was just scared shitless.”

Was Muddy a good card player? “Yes, especially when he would take my money.”

It was keyboardist Neal Evans who suggested Eddie cover Muddy’s “Hoochie Coochie Man” on Change in Me. “I had no idea to put these lyrics to that song. It was just like it just happened.  We actually had recorded this song and I said, ‘I don’t have any lyrics for it.’ And Neal Evans went, ‘I could do “Hoochie Coochie Man” and it’ll be cool.’  So, we did it. This is my homage to the blues guys out there. Don’t say I didn’t put a blues song on this record.”

So, with that song, did Eddie have the arrangement done before he even knew it was going to be “Hoochie Coochie Man?” “That’s exactly what I’m saying. As I always tell myself, I’m really not selling out. I’m just buying in. I’m buying into myself.”

One of the reasons Eddie Turner doesn’t have a huge fan base is that his material is weird, spacey the way Hendrix was, but he also has a pop sensibility that makes his music engaging to anyone with an open mind.

Arnie Goodman of Blue Storm Records told Eddie, “You’re really good, but you’re really weird.” Arnie talked Eddie into leaving his longtime partner producer and bass player Kenny Passarelli and recording in New York. The sessions were a disaster, and Eddie wound up back in Colorado with Kenny recording Change in Me. “I got back with Kenny, apologized for going to New York and doing a project without him. Very, very sorry. He accepted my apologies and got to work.”

Like Buddy Guy and Jimi, Eddie claims not to like his voice. I hear a Curtis Mayfield Super Fly influence in his vocals and delivery. It’s smooth and polished, but rough at the same time. It’s almost like an oxymoron.

“It just sounds weird,” he says.

“It sounds like me. I think singers have a wide variety of heroes, ok? I was driving in the car the other day, and all of a sudden there’s Ella Fitzgerald on the radio, and she’s scatting away. And I’m going, ‘What the hell was that?’ Just so many amazing singers out there.

It hasn’t been easy for Eddie Turner. He’s been up and down, in and out, and he still books himself when he can get gigs at all. “All you can do is tell people. It’s up to everybody to make up their own mind. All you can say is I’ve gone to the mountain. I’ve gone to the top. This guy deserves to stay here. He needs to be on top of the mountain. But I can’t change that. I’m gonna stay true to myself if it kills me. And at the end of the day, it will, but that’s ok. That’s ok ’cause I’m happy. (Maybe not with) what happened, but I’m happy with myself ’cause I can go back to all my records and say you know what? This is one damn good record.

“Every now and then, which is usually every couple of weeks Kenny (Passarelli) will call me up. The guy has played with everybody. He’ll call me and say, ‘You know, Eddie, I’ve just listened to our record, and it’s the best damn record I’ve ever been a part of. I’ve never heard anything so twisted, (but) it makes perfect sense. But it’s twisted.’ And I say, ‘Give me enough time in a recording studio, and I’ll fuck with your mind.’”

Change in Me (out today)