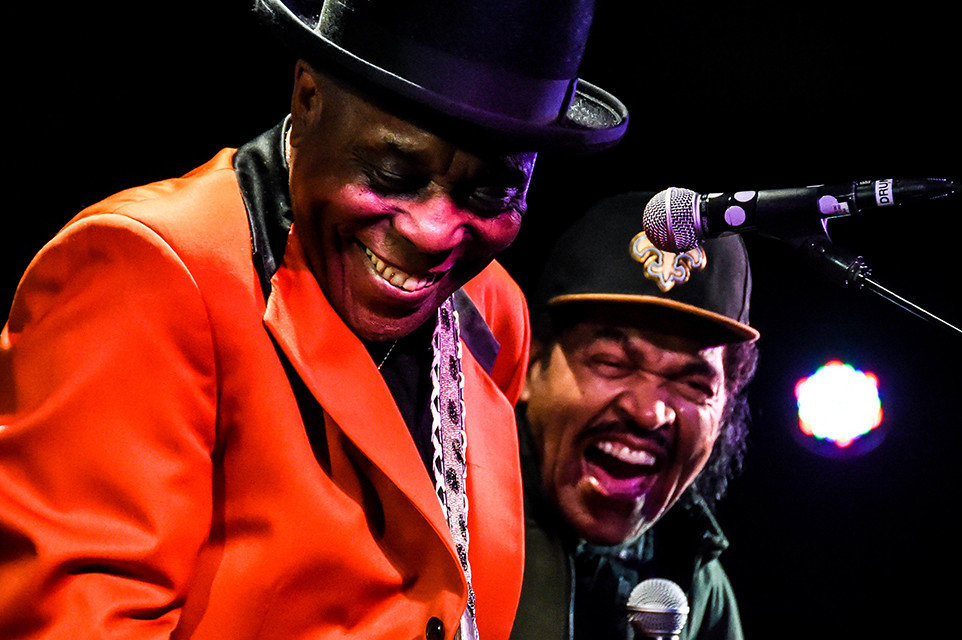 In the world of blues, George “Buddy” Guy reigns supreme. At 81 years old he has seen and done it all. Jimmy Page has called him “an absolute monster,” and Stevie Ray Vaughan said, “Without Buddy Guy, there would be no Stevie Ray Vaughan.” Jimi Hendrix was in awe of Guy and said, “Heaven is lying at Buddy Guy’s feet while listening to him play guitar.” He has been called “the bridge between the blues and rock and roll.”

When Guy was inducted into the Rock and Roll Hall of Fame by B.B. King and Eric Clapton in March of 2005, he told the audience, “If you don’t think you have the blues, just keep living.” He has earned seven Grammy Awards, 23 W.C. Handy Awards (now Blues Music Awards), and has been awarded the National Medal of Arts, and the Kennedy Center Honors in 2012. Even today his touring and performance schedule would make younger men think twice.

Buddy Guy is a humble man at heart. He has used his talent to bring the blues to everyone everywhere around the world, and he uses his stature to lift folks up where he can. Whether it’s fighting cancer with PCa Blue, keeping his Legends club open so young players have a place to grow and be heard, or providing them with studio time, he gives back.

American Blues Scene spoke with Guy recently about lending his voice to the fight against Prostate Cancer, his friendship with Bobby Rush, up and coming young players, and more.

Barry Kerzner for American Blues Scene: How are you?

I ain’t gonna holler, cause don’t nobody hear me. Other than that, I am OK.

A lot of the artists that have been working with you on PCa Blue like Kenny Neal, Barrelhouse Chuck, the Brooks Family, and obviously you and your brother Phil, have been touched by this disease [prostate cancer]. Would you tell us how you got involved and what It means to you to be doing this work?

Well, my brother was like the rest of my family; we never complained early enough I don’t guess. A lot of black people including myself, something hurt you before you get a checkup, you know. I learned that through my brother because his manager had to come to me and tell me that when he was in the hospital. I’m like, ‘How come you didn’t call me?’ and all he’d tell me is ‘I didn’t want to bother you.’

I just felt like I should say something and I got some friends, Bobby Rush and myself and all the rest of these people and hopefully, someone will listen. We just did the Blues Cruise out in the Caribbean, and we had it on the boat, and they asked me if I would take a mile run around the ship and support their prostate. They asked did I want to say anything. The only thing I can say is ‘Don’t be late. Get yourself checked for prostate.’ They all gave me a standing ovation because I’m not a great speaker noways.

It’s like this guy that kneels down at the National Anthem at the football games. He gets a lot of attention for that. I don’t know who’s right or who’s wrong. Sometimes, like Bobby Rush or myself, I hope that someone will listen and go get themselves checked out just because we’re saying it. Hopefully, that’ll help somebody later down the line.

As an aside, some of our readers might not be as familiar with your brother Phil’s work as they are with your work. Some of us older folks realize what a great musician he was, and he was a great human being as well. He was such a funky guitar player! Would you like to take a moment and tell those younger folks about your brother’s playing?

They do play one of his albums on satellite radio, and I think they got your name up there and they calling him me, and I want to get them straight on that now. But he played on a couple albums with me. He played on a couple of albums with Junior [Wells]. He had one or two albums out there, and he was better than me so far as rhythm and lead guitar.

Music is almost like the basketball, football players, whatever league you are: If you’re not at the right time, at the right place, it’s not gonna happen! I don’t care what you are. I remember I was in Australia about 40 years ago watching TV and they said whatever you are, athlete, musician, or whatever it is, only five percent gonna make it, I don’t give a damn how good you are.

It’s a shame too because he was a fine player; outstanding.

Years ago if they were booking as many musicians as it is now, I wouldn’t have to speak like I’m speaking now because say sixty years ago, a little more, you stood out like a sore thumb if you could play. But now, you can walk down the street and find a kid playing. I don’t know if you know about the one I, well not just discovered… I saw him at seven years old, Quinn Sullivan.

I said ‘Well, let me let him hit this one little note so hopefully someone would see him, and hopefully he would learn and play. Man, that kid came up and outplayed me.

He’s quite an individual. He said you were one of the most generous and compassionate people he’d ever met.

He is. He’s very mature for his age.

We got another one; we got him in the studio now, I’m trying to help him along with his playing. He’s Kingfish. I think he’s living in Mississippi with his mama now. He’s sixteen or seventeen, and he can play! So, I put up the money, and my producer got him in there I think he might be recording him this time of year down in Nashville now.

Hopefully, because I do anything to try to keep the blues alive. You know, with my blues club here – If it wasn’t for blues clubs, I don’t know if you’d be talking to me now because you don’t go to Los Angles, New York or Philadelphia, Boston, and drive down the street and find a young lady or young man that’s good enough to be heard. You discover them in blues clubs or something like that, and then some states still won’t let them come in there underage. Illinois put out the law that you can come in my club and play, but you can’t drink alcohol, which is you can’t prevent a kid from making a living if that’s what he chose. So, these young people are very happy about that.

My kids didn’t know who the hell I was until they got twenty-one and they came in the club and saw me playing. All of them just cried. ‘Dad, I didn’t know you could do that.’ No, ‘cause you didn’t know nothing about it. I wasn’t on TV. You know how there isn’t that much blues on television no more. Now I got two sons I can’t get rid of them with a guitar now ‘cause they wicked. They got old enough to see me then they wanted a guitar. When the guitar was in the hose when they was four, five, six, seven, eight, nine, you know, and so on.

You had recently said, and I’m paraphrasing here, that it might be time for you to step back and let some of these younger players take up the flame and carry the blues on to the new generation. Do you have anyone in particular you were speaking about?

Well, I just named the one, Quinn. Quinn and Kingfish, you know. There’s a little young lady [Vanessa Collier] came onstage with me, I forget where I was, but she’s playing an alto saxophone, and man, she was amazing. I think she’s coming in when I do my show(s) at my club next month. I’m gonna look into her and see if anybody wants to hear her ‘cause record companies now, you got to touch somebody before somebody says ‘OK. I might record you.’ You know, because you may have something good there.

Who knows what’s good. It’s like I’m from Louisiana man. People can tell you how good they cook down there all they want but you ain’t gonna know until you taste it.

That’s the truth! I spoke with Bobby Rush last week, and he’s pretty excited about y’all doing that show together in January.

Yeah. He spoke to me yesterday. He was down in my hometown. He was living here when I come here sixty years , and he’s been back in Mississippi I don’t know how many years, but he’s from Louisiana. He called me from New Hope, Louisiana, yesterday morning. His auntie was kind of ill, and he was on his way to see her.

Him and I are the last two from Chicago in those hey days with the Muddys, the Wolfs, and the Sonny Boys; I could go on ‘till next year. Naming Jimmy Reed and all those people who was here man, and all those gone. All the blues clubs gone throughout the world. I used to go to France or Canada and they had a little blues club where a young person could be. It was crawl before you could walk. All those blues clubs done closed up; that’s why I’m keeping mine going in Chicago ‘cause every Monday you can play it all. You can come to my club, and they got a list, you sign it, and you’ll get called up to play.

Wayne Baker Brooks participated in some of the PCa Sons & Daughters events raising money and awareness. He performed, and he also acted as the musical director. Is that going to continue for a while?

It’s up to the individual. I was doing one in Memphis, and that’s the day he called and say his dad had passed, which was earlier this year. He was gonna make a speech with us, and he had to come back then because his dad had just passed away.

I spoke with him about a week after he lost his sister as well. It’s been a rough year for them.

Yeah. You know, my mother used to tell me, ‘Son, if you don’t want to leave here, you better not come here.’ She used to try to prepare us for the time I lost my brother, my mom, Dad, Aunt. I have no more aunties, but they all used to tell us there’s no such thing as you getting around it, it’s just one of those things that’s a part of life. You have to get ready for it. It hurts but you gotta do it because we’re all gonna see that day, one day.

Before you leave us, what would you tell folks about getting checked for Prostate Cancer?

I would say the same thing I said on the blues cruise. ‘Don’t be late!’ Man, make sure, everybody; make sure you get checked because if you got a slow leak in a tire, you need to get it fixed or sooner or later, it’s gonna go down. You have to look at the prostate the same way. Don’t wait ‘till it takes you out, just go see about it now. Don’t wait too late.