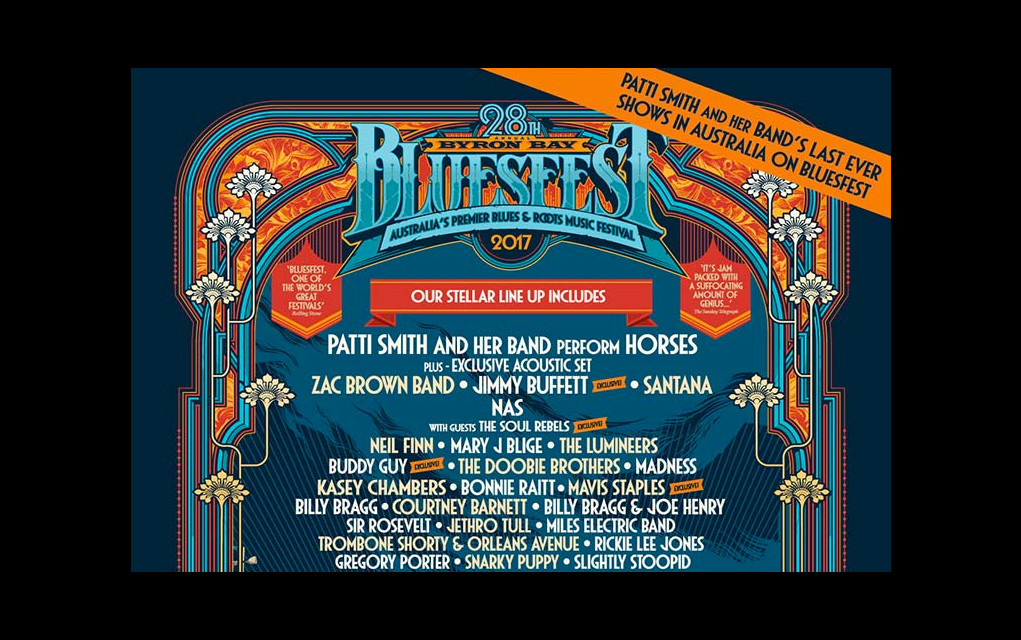 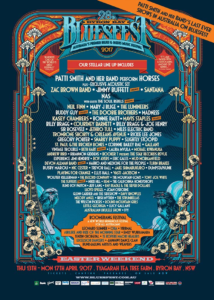 The 28th Annual Byron Bay Bluesfest 2017, Australia’s premier blues and roots music festival was a huge success once again.  Peter Noble founder and multi-award winning music festival tour director has once again delivered a 5-day spectacular musical buffet of Blues and Roots Music.  A great list of well-known artists from all the corners of the globe put in unforgettable performances during the Australian Easter long weekend.

If you’re reading this and already salivating, wanting to experience the sounds and life that this festival breathes for the yearly attendance well over 100,000, purchase tickets. In return for your festival wristband, you get over 200 performances with up to 7 stages over 5, 12 hour days. You also have access to camping for up to 6,000 people, five licensed bars, over 100 food and market stalls, undercover food courts, beer gardens and a plethora of sights and sounds this festival delivers.

The sun shined brightly every day during the festival. Opening the festival with a huge smile and Jerron “Blind Boy” Paxton brought us all back to the 1920’s with nostalgic sounds and talent that is well beyond his years. The crowd loved every bit wanted more. They didn’t judge him by his youth; they witnessed him feeling, playing, and respecting the blues.

Melody Angel, the new face from the South Side of Chicago and a respected regular performer at Buddy Guy’s Legends, received a great reception from her first Australian crowds. Her god given guitar ability and backing vocals from her mother Stephanie got the crowds buzzing all weekend long. She sang her original music from her debut album In The Light, but her Fender Strat did all the talking.  She flew a long way to get to Australia; she told the crowds “I’m living the dream and was happy all the fans were a part of it!” She masterfully pulled the audience in with her emotion and impressive ability. Along with her music she has a documentary Black Girl Rock soon to be released so check her out.  It would be a huge mistake not to bring her back next year, and beyond.

The presence of Mavis Staples on the Bluesfest stage was a perfect addition and treat playing with her longtime backing band and belting out a voice that never falters. Her set list included tracks from her latest album Livin’ on a High Note, and her powerful vocals and energy were visibly appreciated by the crowd.

The return of the legendary Buddy Guy and The Damn Right Blues Band for two consecutive exclusive Bluesfest sets of pure blues brilliance was a pleasure to watch and admire once again. At 81 and full of life, Buddy still lives the blues and to see his greatness hold an audience in the palm of his hand and give a  lesson on guitar showmanship is why they get him back regularly to the Bluesfest Stage. His ability to honor Muddy Waters, BB King and all the greats looking over his shoulder and in his heart every show will never let a crowd down, and no price of admission can replace that. If you’re still wondering? “You’re Damn Right He Still has the Blues!”

One man who could knock any crowd off their feet with his playing is Mr. Vasti Jackson. A man of pure wisdom, creativity, and jaw-dropping sinful licks that knocked me off my feet during his set, he was a pleasure to see. He told the crowd “If you don’t like the blues you have a hole in your soul” and the follow-up line of “I’m here to fill it” settled the matter. Put this man on your playlist and keep it loud: He conjures nastiness and dirty blues out of his guitar, and the sounds are unforgettable.

Mud Morganfield, the eldest son of the legend Muddy Waters, graced the Byron Bay stage with his signature flashy gold jacket and a soulful performance did his dad would be proud of. His ability to get the most out of his blues roots gripped his crowd, along with his deep vocals and harmonica playing.

Beth Hart looked amazing and revitalized her audience, giving them tastes of her highly successful new album Fire On The Floor. Joined by her longtime smooth playing guitarist John Nichols and a tight sounding backing band, she didn’t disappoint. Along with Buddy Guy, she traveled exclusively to play Bluesfest 2017 with no other Australian dates. She reached into her soul once again and gave fans tears and chills, and an ability to feel something deeply.

Eric Gales played his ass off and left nothing in the tank during his appearance this year. He played selections from his newly released Middle of the Road album. His ability to belt out sounds, give love, shed tears, and speak the truth when on stage shows he is back and the future looks bright. His celebration of sobriety through his new music and energy has him in a good place.

If the already mentioned guests weren’t enough I must not forget the guitar god and legend Carlos Santana and his 2017 Transmogrify Tour was also in attendance. His ability to give a performance that lifts you off your chair and leaves you breathless hasn’t diminished a bit since his earliest days. The fantastic percussion section led by his wife Cindy Blackman on the skins, talented background singers and guitarists, and great lighting made for a brilliant show. The man never disappoints. His amazing show of emotion through his guitar nearly brought me to tears as it gave release to his love of music.

Beautiful and amazing Bonnie Raitt took impressed as she always does. Booker T presents the Stax Review told it how it is. Sexy Nikki Hill is always amazing, on and off the stage. Tony Joe White the Swamp Fox sang from the heart and was an honor to hear the classic Deep Southern Blues.  Devon Allman Band (great new album Ride Or Die) tore the roof off the Juke Joint. Gregory Porter gained more fans and sounded great.

Rikki Lee Jones still has her sweetheart charm, and it was great to see her on a big stage again. Kasey Chambers, an Aussie sweetheart and hometown favorite, was an impressive addition. The Doobie Brothers still great classic rock band still tight as ever. Little Georgia a new up and coming Aussie duet to keep an ear open for. As for Jimmy Buffet, just add beer, sand, music and that’s him. Patti Smith and Her Band‘s iconic last ever Australian show was memorable.

There was still more. Roy Ayers is a percussionist with a deep soul. Trombone Shorty and the New Orleans Revue are remarkable, and a definite crowd pleaser; with just a single shirt and a trombone, nothing else was needed. The Zac Brown Band performed a great live set and an introduction to his newest project Sir Rosevelt. Mary J Blige, the R&B Queen still has a huge voice.

As the electricity and intensity grew with each new day, Festival promoter Peter Noble and his team gave justice to the blues and demonstrated how a festival could be successful. If you have never traveled to Australia and experienced its beautiful landscape and people, add it to your bucket list of music festivals and attend the Byron Bay Blues and Roots Music Festival. You will not be disappointed.

I left late on Monday night feeling exhaustion, peace, and excitement. I was excited for my full tank of blues love and grateful that I had photographed and absorbed five days that will stay with me forever.